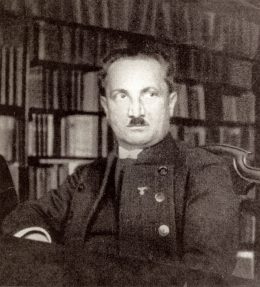 Martin Heidegger is one of the giants of twentieth-century philosophy, both in terms of the depth and originality of his ideas and the breadth of his influence in philosophy, theology, the human sciences, and culture in general.

Heidegger was born on September 26, 1889, in the town of Meßkirch in the district of Sigmaringen in Baden-Württemberg, Germany. He died on May 26, 1976 in Freiburg and was buried in Meßkirch.

Heidegger was from a lower-class Catholic family. His family was too poor to send him to university, so he enrolled in a Jesuit seminary. But Heidegger was soon rejected by the Jesuits due to a heart condition. He then studied theology at the University of Freiburg from 1909–1911, after which time he switched his focus to philosophy. Eventually Heidegger broke entirely with Christianity.

In 1914 Heidegger defended his doctoral dissertation. In 1916, he defended his habilitation dissertation, which entitled him to teach in a German university. During the First World War, Heidegger was spared front duty because of his heart condition.

From 1919 to 1923, Heidegger was the salaried research assistant of Edmund Husserl at the University of Freiburg. Husserl, who was a Jewish convert to Lutheranism, was the founder of the phenomenological movement in German philosophy, and Heidegger was to become his most illustrious student.

In 1923, Heidegger was appointed assistant professor of philosophy at the University of Marburg. There his intense and penetrating engagement with the history of philosophy quickly became known throughout Europe, and students flocked to his lectures, including Hans-Georg Gadamer, who became Heidegger’s most eminent student, as well as such Jewish thinkers as Leo Strauss, Hannah Arendt, and Hans Jonas. In 1927, Heidegger published his magnum opus, Being and Time, the foundation of his world-wide fame. In 1928, Husserl retired from the University of Freiburg, and Heidegger returned to replace him, remaining in Freiburg for the rest of his academic career.

Heidegger was elected rector of the University of Freiburg on April 21, 1933. Heidegger joined the ruling National Socialist German Workers Party on May 1, 1933. In his inaugural address as rector on May 27, 1933, and in political speeches and articles from the same period, he expressed his support for the NSDAP and Adolf Hitler. Heidegger resigned as rector in April 1934, but he remained a member of the NSDAP until 1945. After the Second World War, the French occupation authorities banned Heidegger from teaching. In 1949, he was officially “de-Nazified” without penalty. He began teaching again in the 1950–51 academic year. He continued to teach until 1967.

Yes, Heidegger belonged intellectually to the “Conservative Revolutionary” milieu. Yes, he thought that the NSDAP was the best political option available for Germany. But Heidegger’s view of the meaning of National Socialism was rather unorthodox.

Heidegger viewed the National Socialist revolution as the self-assertion of a historically-defined people, the Germans, who wished to regain control of their destiny from an emerging global-technological-materialistic system represented by both Soviet communism and Anglo-Saxon capitalism. This revolt against leveling, homogenizing globalism was, in Heidegger’s words, “the inner truth and greatness” of National Socialism. From this point of view, the NSDAP’s biological racism and anti-Semitism seemed to be not only philosophically naive and superficial but also political distractions.

Heidegger knew that Jews were not Germans, and that Jews were major promoters of the system he rejected. He was glad to see their power broken, but he also had cordial relationships with many Jewish students, including extramarital affairs with Hannah Arendt and Elisabeth Blochmann (who was half-Jewish).

In the end, Heidegger believed that the Third Reich failed to free itself and Europe from the pincers of Soviet and Anglo-Saxon materialism. The necessities of re-armament and war forced a rapprochement with big business and heavy industry, thus Germany fell into the trammels of global technological materialism even as she tried to resist it.

Heidegger was not, however, a Luddite. He was not opposed to technology per se, but to what he called the “essence” of technology, which is not technology itself, but a way of seeing ourselves and the world: the world as a stockpile of resources available for human use, a world in which there are no limits, in principle, to human knowledge or power. This worldview is incompatible with any sort of mystery, including the mystery of our origins or destiny. It is a denial of human differentiation — the differentiation that comes from multiple roots and multiple destinies.

But on Heidegger’s own terms, it is still possible to combine a technological civilization with an archaic value system, to reject the essence of technology and affirm rootedness and differentiation. This is what Guillaume Faye calls “archeofuturism.”

Ultimately, Heidegger’s philosophy — particularly his account of human being in time, his fundamental ontology, his account of the history of the West, and his critique of modernity and technology — is of greater significance to the project of the North American New Right than his connection with National Socialism. It is a measure of the embryonic nature of our movement that we are just beginning to deal with his work.

Heidegger is widely cited in our pages.

So far, we have published the following books, articles, and reviews by or related to Heidegger:

Substantial reference to Heidegger is made in the following:

Greg Johnson’s From Plato to Postmodernism contains material on Heidegger.

There is also some discussion of Heidegger in Trevor Lynch’s review essay on Christopher Nolan’s The Dark Knight.

Heidegger is a notoriously difficult stylist. But he was a brilliant lecturer, and his lecture courses are far more accessible than the works he prepared for publication.

Eventually, every reader of Heidegger will have to conquer Being and Time, but a useful preparation for reading Being and Time is the contemporary lecture course History of the Concept of Time: Prolegomena. Being and Time was never finished, but one can get a sense of how the book would have been completed by reading another highly lucid lecture course, The Basic Problems of Phenomenology.

There is an immense secondary literature on Heidegger, but most of it is no more accessible than Heidegger himself. The best biography is Rüdiger Safranski, Martin Heidegger: Between Good and Evil. Another highly interesting biographical work is Heinrich Wiegand Petzet, Encounters and Dialogues with Martin Heidegger, 1929–1976, which gives a vivid sense of the highly cultivated people in Heidegger’s generally Right-wing and National Socialist milieu.

As for Heidegger’s philosophy, Richard Polt’s Heidegger: An Introduction is a lucid overview of the whole range and development of Heidegger’s thought.

Michael Zimmerman’s Heidegger’s Confrontation with Modernity: Technology, Politics, and Art is one of the best books ever written about Heidegger. It is clearly written and thrilling to read. It deals with Heidegger’s thought in the context of the Conservative Revolution, extensively discusses his relationship to Ernst Jünger, deals with Heidegger’s relationship with National Socialism, and situates it all in the context of the development of his fundamental ontology.