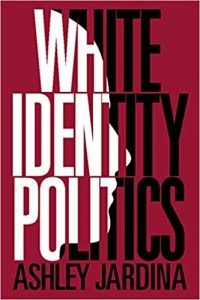 The big takeaway from White Identity Politics is that there’s been a huge raising of white American racial consciousness in recent years. This is due to a number of factors, none of them imaginary or rhetorical. There is the juggernaut of non-white faces appearing in the media, and there is the risk of America sinking to white-minority status in another couple of decades. There was Barack Obama. And there’s the endless immigration crisis, which we are constantly reminded is insoluble.

For Ashley Jardina, Assistant Professor of Political Science at Duke University, American politics have passed a watershed point, after which “white racial solidarity is a pivotal factor in contemporary electoral politics.” What makes Jardina’s treatment notable is that she tries to get away from the

leading paradigm in the study of race and American politics – namely, that the problem of racial conflict lies almost exclusively in the individual and irrational hostilities of white Americans . . . [W]e need new ways of understanding race relations in the United States, ones that take seriously the idea that race is a fundamental organizing principle of American society . . .[1]

This all sounds like a breath of fresh air, and normally might be cause for rejoicing. Alas, Jardina’s book is difficult to read or take seriously. I believe she made the book deliberately obtuse because she knew she was staking out a position that few people, other than those on the nationalist or race-realist Right, are capable of comprehending.

She did this partly by cluttering the body of her book with charts and apparatus that would have been fine in a twelve-page paper, but defeat the reader in long-form. Supporting information that should have been consigned to an appendix is instead thrown into the middle of the text, often with (near-) indecipherable statistical graphs that the author has scraped off the Internet. Then there are the inline citations, dozens in every chapter, often marching together four or five abreast. By “inline citations” – also called “in-text” or “Chicago-style” – I mean short, parenthetical references to books and studies, e.g., “(Smith, 1999),” which are then fully described in the endnotes and/or bibliography. The idea behind this style is that it is supposed to be less disruptive than traditional endnotes, where you have to go to the back of the book to see who’s being cited. However, when you put six or ten in a single paragraph, as Jardina does, it defeats that purpose of convenience. Further, it suggests she has never read the works she is citing (too many of them!) and is just throwing in every reference she can find.[2]

Finally, there’s the problem of ambiguity in most of the surveys she cites. Now, this is to some extent unavoidable, since these surveys depend on very “soft” questions, with subjective answers about things such as whether whites have too much power, or whether you feel guilty about “white privilege.” These surveys inevitably reflect emotional status as well as what one’s sense of what a “correct” answer should be (see particularly the ones in Chapter 5, “The Content and Contours of Whiteness”). Any single one of these surveys is pretty useless by itself, but in the aggregate they do seem to point to demographic differences, albeit ones we would intuit anyway (e.g., blacks feel more aggrieved and alienated than whites).

Nevertheless, Jardina gives us too many survey-response charts in the body of the book, most of them of obscure purpose. Our eyes quickly glaze over. Below is a good example, showing how those with a higher “white identity” score may have more emotional involvement when facing prospects of non-white immigration and white-minority status:[3] 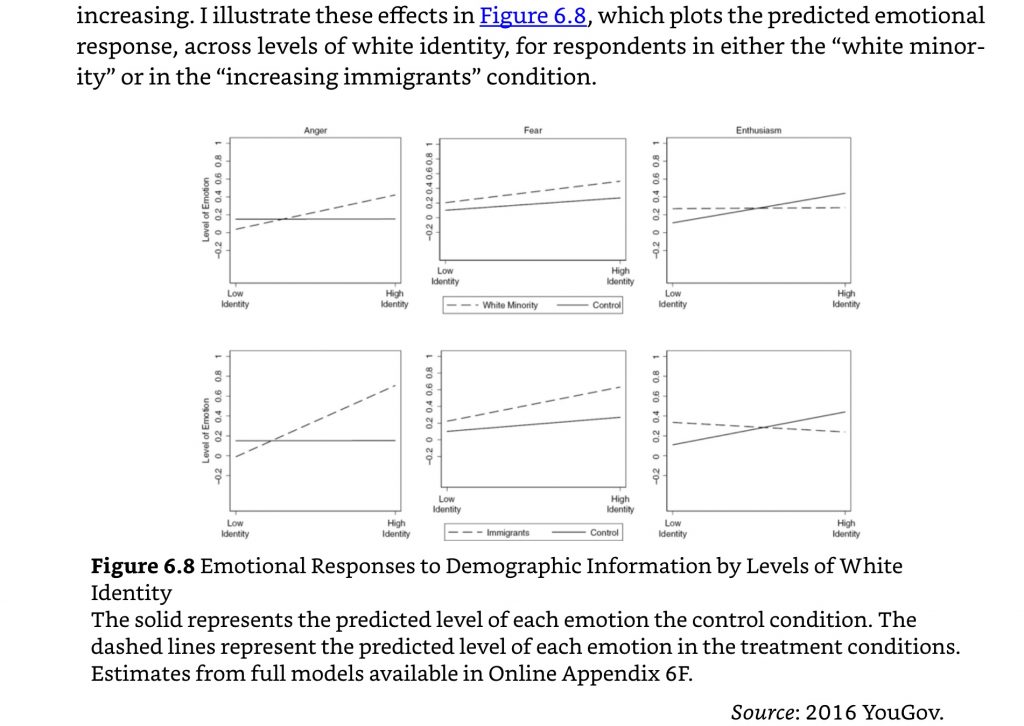 Often, Jardina doesn’t seem to know whether she is presenting a data-based thesis or just wants to look as though she is. What we end up with looks like cargo-cult sociology: something with the superficial appearance of a scholarly study, but really with no more substance than the wooden “aircraft” that post-Second World War New Guineans would construct in order to encourage the big-fella cargo planes to return. If you didn’t look too closely, you just might mistake it for the real thing.

Actually, I lean to another explanation for Jardina’s clutter and confusion. It’s deliberate. She’s trying to “hide the ball.” Her thesis, though neither radical nor partisan, might be perceived as dangerous – something that gives aid and comfort to race-realist and anti-immigration groups. By presenting it in such a diffuse manner – “this survey says this, but then again that survey says that” – she makes it look as though she’s merely data-dumping objective findings for the reader to sort out on his own. Furthermore, the labeling of these charts, such as the one above (which rates “predicted emotional response” based on degree of white identity) often has the effect of suggesting that it’s all a white-people problem.

And so it goes throughout the book. The author attempts conclusions, then works very hard to walk them back. In the middle of telling us that whites are becoming aggrieved and annoyed, with “many . . . willingly adopt[ing] a racial identity,” she counterbalances it all with fluffy reminders that many don’t believe in race at all, or they like to virtue-signal by saying how anti-racist they are. For example, these hilarious, “rarely expressed,” anonymous comments, gathered via crowdsourcing with YouGov and Amazon’s Mechanical Turk facility:

I have zero pride in being white. Thinking about whiteness to me, means thinking about white privilege and all the unfair unsubscribed benefits I have received for simply being born white. Being white is embarrassing. Often shameful. (YouGov)

I thought about all the white supremicists [sic] that would think it was so important to be white and I was disgusted by the thought. I hate how white America bullies other races and I wish white people could acknowledge their racism. (You Gov)

Maybe my identity as a member of specific European ethnicities is significant to me, but not the color of my skin. That’s just asinine. The only people who are ever “proud” of being white are neo Nazis, KKK members, or various unaffiliated hicks. (MTurk)[4]

When interviewed about the book, Jardina tries very hard to gloss over her book’s main thesis, saying she now believes the rise in white identity isn’t really as big as it looked, while pushing boilerplate blather about how immigration is good for the economy. From a Vox interview a couple of months back:

I’ve observed that levels of racial identity among white Americans have actually decreased since Trump’s election. I’m working now with colleagues to understand better what has motivated some whites to reject a racial identity they were previously willing to claim. . . .

[M]uch research suggests that we need immigrants to help maintain the country’s economic growth, and to provide a solid tax base to fund entitlement programs. And it’s actually with respect to protecting and preserving parts of our social safety net that we might find more common ground among Americans, regardless of race or ethnicity.

White Identity Politics may have grown out of a short analysis/opinion column Jardina wrote in the Washington Post around the time of “Charlottesville” in August 2017. If you go to that piece, you can see in embryo some of the inner contradictions of this book. Jardina keeps bringing up “white supremacy,” then denies that this notion is a meaningful factor. She presents her central thesis loud and clear, but does so while gratuitously mentioning the “KKK” and “neo-Nazis”:

The vast majority of white Americans who feel threatened by the country’s growing racial and ethnic diversity are not members of the KKK or neo-Nazis. They are much greater in number, and far more mainstream, than the white supremacists who protested in Virginia over the weekend.

Thus she panders to that paper’s need for sensationalism while denying that there’s anything sensationalist out there. More substantively, she cites a late-2016 Pew poll in which fifty-four percent of Americans had never even heard of the “Alt Right” (a phenomenon that WaPo could never seem to get enough of in 2016 and 2017).

Per Jardina’s various poll findings, whites who were race-conscious as of 2017 now comprised about half of the total electorate. Thus, race-realist Americans who are opposed to having their country destroyed by unbridled non-white invasions (or “immigration”) are not a fringe movement of “extremists,” but rather represent a substantial and growing body of opinion that today’s politicians ignore at their peril:

In short, the larger phenomenon of white identity politics is not reflected in the images of hooded Klansmen or disaffected white men marching with tiki torches. White identity politics is packaged much more decorously and [is] clearly part of mainstream opinion. Any condemnation by Trump or others of white nationalism might reinforce the already negative views most Americans have of these extremist groups, but it will likely do little to change the broader and more pervasive role of white identity in American politics.

Ashley Jardina would make an excellent pollster and consultant for any Democrat candidate seeking the Presidential nomination next year. I don’t really expect this to happen. Her findings rock the boat, and she knows they do. But going forward, politicians will ignore them at their peril.

[2] To pick three problematic items that caught my attention, Jardina cites books by Noel Ignatiev, Ray Allen Billington, and J. D. Vance. My guess is that if she had read these books, she would not have included them.