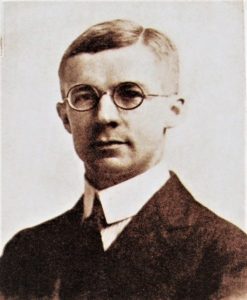 I’d like to introduce the reader to an important Rightist of the past — Merwin K. Hart (1881-1962). Hart was a critic of Roosevelt and the New Deal throughout the 1930s and 1940s. He created a metapolitical society that eventually came to be called the National Economic Council, Inc. The National Economic Council aimed to fight the New Deal reforms of the Franklin Delano Roosevelt Administration and turn back Communism more generally.

We would do well to emulate the work of Merwin Hart. His career was remarkably successful. He made powerful enemies along the way but still came out on top. His ideas became triumphant with the Reagan administration, and Reagan used those ideas to win the Cold War.

Most of the research material I used for this article comes from declassified FBI files on Hart. The quotes that aren’t cited come from this file.

Franklin Delano Roosevelt, His Massive Coalition, and the New Dealers

To explain Hart’s ideas, one must understand the Leftism of his time and Leftism more generally. Destructive Leftism needs an economic crisis to start growing. The recrudescence of the destructive Leftism that exists today started in the 2008 economic crisis. The Leftism of FDR was made more powerful following the 1929 stock market crash and the Great Depression. The election of 1932, held in the middle of the depression, swept the Republicans from power. This included many Congressmen that were immigration restrictionists.

Franklin Roosevelt is a curious man. He kept his deepest beliefs to himself and was probably a high functioning sociopath. He was something of a genuine Leftist while being something of a white advocate at the same time. To explain, he supported the anarchists Sacco and Vanzetti in the 1920s, but supported segregationists and Southern efforts to manage Sub-Saharans. His administration also resisted immigration while hiring Jews that were secret Communists.

FDR’s wife Eleanor was a dedicated Leftist who took up the causes of the various radical movements in the Democratic Party at the time — like “civil rights.” Throughout her long life, she was often bedazzled with charming Leftists who turned out to be Communists genuinely trying to overthrow the US Government. Historians characterize Eleanor as cunning and naive.

FDR’s Democratic Party was a massive coalition. It functioned because of the political genius of Franklin and Eleanor, unity in the face of external threats/ongoing crises, and by the fact that the various factions within the Party didn’t attack the critical beliefs of the other. [1]

FDR’s coalition was also held together by its choice of a domestic enemy. This enemy was mostly Yankees who had been successful before the Depression. More carefully phrased, they were Northeastern WASPs who were often involved in finance and complex commercial activity. Merwin K. Hart was squarely from this group. He was a Yankee whose family was prominent in Utica, New York. They were wealthy, but did lose some of their fortune during the 1929 Crash.

Merwin K. Hart’s family were in Connecticut as early as the 1690s. They went on to be prominent in business and finance in Utica, New York. Upstate New York is an extension of New England. His family was Republican. Greater New England was the only part of the United States that held out in any way against Franklin Delano Roosevelt.

Part of what concerned Hart was Roosevelt enacting Keynesian economic policies to turn around the economy. These economic ideas were popularized by John Maynard Keynes (1883-1946). Keynes was building on monetary policy ideas first explored in the 1890s. The first time the idea that using government funds to hire unemployed workers for public works projects was pushed by a Populist from Ohio named Jacob Coxey in 1894.

Today, Keynesian economics is just one tool among many economic policies that any government can enact. It works well in some cases and poorly in others. Rightists can use Keynesian policies as well as Leftists.

But in the 1930s it was new enough that there was a genuine concern that the economy would crash further with those policies enacted. Furthermore, some of the Roosevelt administration’s Keynesian economic ideas were obviously bad, like buying cattle from farmers in the drought-stricken prairies then shooting and burying the livestock. Most importantly though, the proponents of Keynesian economics were pretty radical, and some were out-and-out Communists.

Hart graduated from Harvard in 1904, a situation that gave him enormous social connections. He was elected to the New York State Assembly in 1906. He ran for the state senate in 1908 but he was defeated. According to an FBI report, Hart was

[A] very influential and respected man in the community, but had very few intimate personal friends, being the type who knew “everybody that counted” and who was very formal and aloof in his manner. While he was not disliked by the businessmen in Utica, he is not at all personally popular with them.

In addition to state politics, Hart practiced law, was involved in manufacturing, and organized various civic societies. During World War I, Hart served in the army, attaining the rank of captain. 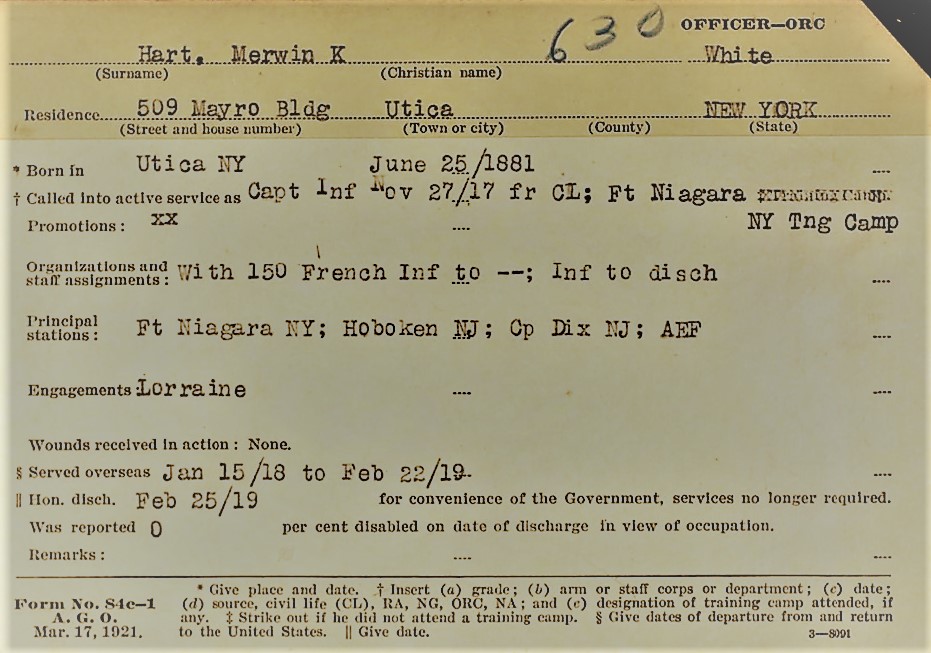 A record of Captain Merwin K. Hart’s military service. Hart matches the pattern of pro-white activity in the twentieth century – it was led by the brave captains of the First World War.

Hart comes to the attention of the FBI in early 1942. They seem to be concerned about his activities because he was a supporter of Franco in Spain, he supported the German-American Bund, and the America First activist Charles A. Lindberg. Hart was also a prominent critic of the Roosevelt administration. It is probably the criticism of Roosevelt that was the main motivation for opening an investigation.

The FBI seemed to have no trouble finding informants to fill in the details of Hart’s activities. However, Hart said the same things in private as he said in public. He was a foe of Communism, American decline, and pro-Franco.

The Roosevelt administration used invective against Hart in addition to FBI spying. Much of the invective involved Secretary of the Interior Harold L. Ickes (1874-1952). At one point Ickes called Hart, “anti-Semite, anti-Negro, and anti-sharecropper.”

Anti-sharecropper? On the surface, “anti-sharecropper” is an odd choice of words for Ickes to use against Hart, but it makes sense given FDR’s coalition. Many people in the South had to take up sharecropping during the depression, so Ickes could kill two birds with one stone by shoring up his base and insulting his enemy in a single quip.

Eventually, the FBI was able to indict one of Hart’s allies, John Eoghan Kelly, as an unregistered agent of a foreign country (Francoist Spain) in 1943. Kelly was found guilty.

In many ways, the political Left of Roosevelt’s time used the same tricks the mainstream media and Obama administration used against Trump. They selectively prosecuted Kelly for supporting a foreign nation while ignoring those who supported the Soviet Union. They used a great deal of slander and got the FBI involved in investigating an otherwise legitimate group. All the time, they claimed they were supporting “democracy” while Hart was a fascist.

Hart Gets the Last Word

Hart’s fortunes changed in 1945. Roosevelt died and the considerable personal Roosevelt charm that papered over the real-world problems of his New Deal economic policies vanished. Truman thus inherited a floundering economy that created many headaches for him and caused the Republicans to win the House in 1946.

With the Nazis gone, the general public noticed the Soviet threat rather quickly too. [2] In 1944, Joe McCarthy, who would become an anti-Communist senator in the 1950s, changed party allegiance. The New Deal Leftists, Jews, and anti-Communists in Roosevelt’s coalition were starting to push out the more astute anti-Communist political operators.

These Democratic refugees were welcomed into the anti-Communist community that had been organized in part by Merwin K. Hart. The United States would go on to ally with Franco’s Spain by the end of the 1940s and remove Communists — many of whom were Jews in the 1950s. Merwin K. Hart was part of the effort.

The ideas of Hart’s economic policy are now mainstream talking points. They are:

In a 1948 publication by the National Economic Council, Hart is also prophetic. He argues that the Labour Party’s nationalization of large industries in Great Britain and rationing would harm the British economy. He was right, while there were occasional upswings, the British economy floundered from crisis to crisis until Margaret Thatcher started to dial down state industries.

Hart further argued that political Zionism was bad for America. Indeed, the biggest ethnic conflict in the United States is between Yankees and Jews. Zionism and Israel have caused the United States no end of problems, including the Global War on Terror.

Hart died in 1962, he worked hard his entire life, kept within the law, and helped America keep free of domestic Communist subversion. Many of his ideas are now mainstream. It is up to us to continue his efforts.

[1] An artistic example of the Democratic Party’s coalition is the Leftist Joan Baez singing “The Night they Drove Old Dixie Down” in the early 1960s.

[2] The “Punch a Nazi” meme starts as early as 1946, with the movie The Best Years of Our Lives. In the film, an America First person is punched out by an enraged veteran. There are no rebuttals to the America First anti-communist actor in the film. It is pure emotionalism. The scene is here.