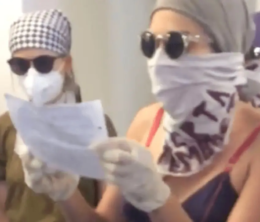 Viennese feminists inside the office of oe24

The George Floyd saga cemented the fact that in modern America, if you’re black and something bad happens to you, it’s BECAUSE you’re black. There doesn’t have to be even the slightest wisp of evidence that your misfortune was motivated by racial animus for it to magically become a hate crime.

Late last December, 14-year-old Keyon Harrold, Jr. was accosted in a hotel in the SoHo district of Manhattan by Miya Taylor Ponsetto, a woman in her early 20s who accused him of stealing her phone. When Harrold’s father, a jazz musician, asked her if she was saying this simply because he’s black, she denied it — it’s on camera. She also stupidly tackled the young Negroidal buck as he tried exiting the hotel, and last I checked, stupidly tackling someone is technically a crime. It turns out that she’d left her phone in an Uber vehicle, but I suspect she was not aware of that at the time.

But Ponsetto, a California native who was immediately dubbed “SoHo Karen” by the sort of people who want to make it impossible for non-black women to ever accuse black people of crimes, was charged last week with aggravated harassment, endangering the welfare of a child, and unlawful imprisonment as a hate crime. “Ponsetto” is an Italian surname, but she also claims Greek, Puerto Rican, and Vietnamese ancestry, making her fall far short of ideal Karenesque ancestry.

She is also being sued by Harrold’s family. Racial ambulance chasers Ben Crump — who has nabbed the spotlight in such dubiously hate-related cases as that of George Floyd, Trayvon Martin, and Mike Brown — and the Right Reverend Al Sharpton have also elbowed their way into the story. At a press conference last Wednesday, Sharpton bellowed, “Hate is in the actions and this, today, established a legal precedent that we needed in the city of New York.”

Never mind the black crime stats. The legal precedent that’s been established here is that if you accuse any black person, rightly or wrongly, of any malfeasance, the only possible motive is racial hatred. Expect black crime to get far, far worse.

Imagine a glorious future where, in your dotage, you are tended to exclusively by inept black doctors and nurses who’ve had it drilled into their skulls since birth that they are justified in hating you.

You don’t even have to imagine a future where such “professionals” can attempt to evade prosecution or dismissal merely by claiming that you called them a “nigger.” That’s already happening in the present.

Robert Jenyo is a Nigerian-born black ex-physician who, way back in 2005, found himself lucky enough to be living in England rather than Nigeria. When a 60-year-old white patient came in complaining of back and shoulder pain, he summarily sent the man off for physical therapy without bothering to do the requisite blood tests and scans.

Two years later, the man died of cancer — the same cancer that in 2005 was causing his back and shoulder pain.

When a 2015 review of the case threatened to strip Jenyo of his medical license, he attempted to divert attention by claiming that the dead man’s son, himself a physician, had said the following to him during a heated phone conversation:

I will ensure you are sued and struck off. Where do you come from — you [need] to go back to your own country and give way for white doctors to work, you fucking nigger.

This past May, during an appeal to regain his medical license, Jenyo admitted he’d lied about the whole “fucking nigger” thing:

I had been under pressure at work and was stressed and I was trying to cover up things. When the complaint came in, I did not want the details of this case to come out and suggest to patients, my colleagues and to the public I am a bad doctor. At the time, a high workload was making him tired and stressed but I now realize the impact my actions have had on Patient A and his family and I regret what happened.

You’re a bad doctor and a bad person, you fucking Nigerian.

Have you noticed that over the past few years, the anti-misogyny hysteria has taken a back seat to the anti-racism hysteria?

A case last week in Austria illustrates this trend in the most troubling manner possible. A 13-year-old Austrian girl was recently raped and killed.

As recently as ten years ago, one would have expected a group of 20 masked feminist extremists to seek out and kill the Afghanis. Instead, a group of masked harpies calling themselves Wiener Einsatzgruppe Feminist Alarmabteilung (Wefa) stormed the news station for their alleged “racist reporting.” Before police arrived to rout them, they distributed leaflets with the following passage:

It’s a wicky-wacky, topsy-turvy world when a group of rad-femmes, due to racial sensitivity amplified to the point of absurdity, care more about the feelings of a group of swarthy rapist-murderers than they do about the legacy of a girl who was plied with ecstasy tablets, raped repeatedly, and then killed.

Even though “Raytheon” sounds like the first name of a black running back from the University of Mississippi, it is the USA’s second-largest defense contractor, with 180,000 or so employees and total assets of around $160 billion.

Just like nearly every other major corporation you’ve ever heard of (check out the list of 1,670 signatories at the bottom of this nutty document), Raytheon’s CEO Greg Hayes has agreed to make his massive death-machine-making company more “diverse” and “inclusive” so that when scruffy goatherders are being bombed into oblivion in the Middle East, it at least is being done in the loving spirit of Critical Race Theory’s diktats.

Suggesting that none of the 1,670 signatories of that aforementioned nutty document even bothered to read all 2.5 pages of it but were perhaps threatened into signing it, here is a sample passage:

By encouraging an ongoing dialogue and not tolerating any incongruencorce [sic] with these values of openness, we are building trust, encouraging compassion and open-mindedness, and reinforcing our commitment to a culture of inclusivity.

“Incongruencorce”? You may not have noticed (I’m paid to notice it for a living), but the rise of equitability-based gobbledygook about diversificacity and inclusification has been directly correlated with a ghastly rise of illiteracy, even in the highest places.

Going the extra mile to ensure that no corporate child, no matter how dumb, is left behind, Raytheon has also published a pamphlet called “Stronger Together: Employee Guide [to] Becoming an Anti-Racist Today.” It includes allegedly inspirational quotes from woketards such as Ibrahim X. Kendi and Kimberlé Crenshaw. It pimps a workshop called “Developing Intersectional Allyship in the Workplace,” a chart titled “What Not to Say to Your Black Colleagues Right Now,” and an article named “75 Things White People Can Do for Racial Justice,” one of which is to “defund the police.”

Even though white people are addressed as a monolithic bloc — a solid Thor’s hammer of oppression — they are also scolded for having “the privilege of individuality,” which doesn’t make sense, but perhaps not making sense is the entire point. Whites are encouraged to discourage themselves from speaking up at company meetings if any Person of Marginalization wishes to speak first, because “you learn more when you listen than when you speak,” although somehow that maxim magically doesn’t apply to the marginalized. Whites are also instructed to realize that their own discomfort can never compare to the discomfort that nonwhites feel simply by being around whites, which seems sadistically designed to make whites feel as uncomfortable as is humanly possible. And though the entire manual by this weapons-making behemoth warns about the “weaponization of whiteness,” it only serves as further evidence that the military-industrial-academic-media complex is using anti-whiteness as a weapon.

Gypsy Moth Goes the Way of the Jewfish

Nearly two decades ago, a group of culturally sensitive ichthyologists renamed the “jewfish” to the goliath grouper. Although I’ve only seen drawings of Goliath, my sober assessment is that the jewfish resembles people I’ve seen in Manhattan’s Garment District far more than it looks like the biblical giant, but alas, I’m not the one who gets to call these shots.

I’m still unsure if they’ve ever gotten around to changing the name of the Nigger-Fish. If not, this would suggest that Jewish fish have far more cultural clout than black ones, as if we all didn’t already know that.

The Entomological Society of America has made it their mission to “revise problematic insect names,” and the latest critters to go the way of the jewfish are the gypsy moth and gypsy ant.

According to a TV news story: “The moths are invasive and destructive critters in the caterpillar stage. They have a voracious appetite that can denude entire forests of leaves.”

It also quotes Michelle S. Smith, president of the Entomological Society of America, about the reason for the name change:

It’s an ethnic slur to begin with that’s been rejected by the Romani people a long time ago. Second, nobody wants to be associated with a harmful invasive pest.

That’s as may be, Bug Lady, but did anyone ask the moths about how they feel being compared to those filthy, stinking Gypsies?