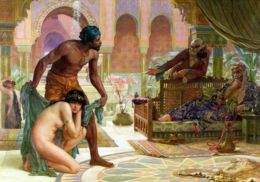 A sharp, functional sense of victimhood may grate on the pride of many white people. After all, it was whites who ushered in the modern world these past few centuries, and because of their phenomenal success in such a wide array of fields, many Western whites simply don’t and never did feel like victims. Aren’t all groups of people victims at some point or another throughout history, anyway? Isn’t victimhood universal? If so, then why dwell on it when doing so would only engender unfounded feelings of resentment and discontent?

The reason why is because in today’s multiracial world, the majority of non-whites do exactly this in order to acquire power and wealth — often at the expense of whites. They weaponize their sense of victimhood as part of a group strategy for cultural and political dominance — with a permanent chip on their shoulders, no less. Somewhere in these machinations, which inevitably expand and exaggerate victimhood for political purposes, the truth gets warped beyond all recognition.

The fraudulent 1619 Project is a great example of blacks hijacking history in this manner in order to attain status without having to earn it. Norman Finkelstein’s 2000 work The Holocaust Industry chronicles how Jews abuse the memory of the Jewish Holocaust in order to reap financial reward or further Jewish political interests. Tobias Langdon makes similar points in his article “Holy Minority Day.”

Sadly, this dishonest and dishonorable tactic works well in the West because most whites don’t have their own sense of victimhood with which to counter those of non-whites. Note how Hungarian Prime Minister Victor Orbán recently invoked white victimhood in the face of potential Muslim occupiers when he presented Pope Francis with a copy of a 1243 letter from King Béla IV of Hungary to Pope Innocent IV. The letter described the urgent need to strengthen fortifications along the Danube River to prepare for a Mongol invasion. So far, this tack has helped keep Eastern Europe mostly white.

Unless whites wish to continue being bullied by opportunistic outgroup members in their own homelands — as well as having their homelands invaded by these same outgroups — they will need to emulate Victor Orbán and employ their own sense of victimhood. And this victimhood is not only very real, but springs from the historical actions of both whites and non-whites.

These days, non-whites, and blacks in particular, weaponize historical slavery as their victimhood of choice. In order to check this, I will offer a brief reading list on historical white slavery which will hopefully help instill a healthy and accurate sense of victimhood among white people everywhere.

1. They Were White and They Were Slaves: The Untold History of the Enslavement of Whites in Early America (1991) by Michael Hoffman

This concise yet wide-ranging introduction to the topic begins with white slavery in ancient and medieval times. Hoffman, however, focuses on the abject squalor and cruel conditions large numbers of working-class whites had to endure in Britain from the sixteenth through the nineteenth centuries, especially in factories. From here, he delves into how hundreds of thousands of white Britons were abducted or otherwise shipped off to a life of agonizing servitude in the New World. The conditions, especially on Caribbean sugar plantations, were so appalling that they amounted to a death sentence in many cases.

Hoffman explores indentured servitude’s fraudulent nature and demonstrates how many whites were either cheated out of their freedom dues or worked to death before being able to achieve them. Physical abuse and rape were common within this system.

Most importantly, Hoffman compares white slavery to black slavery in the New World, and finds them quite comparable — even worse for the white slaves in some places. This not only promotes white victimization, but it also diminishes the myth — or really, the weapon — of black victimization.

There can be no better introduction to the topic of white slavery than this.

In focusing mostly on white slavery during the Colonial period in America, this work is much less broad in its approach than They Were White, yet dives much deeper into the areas where they overlap. The authors essentially tell the heartbreaking story of white slavery in America in chronological order. It’s complete with victims and villains, and contains the requisite names, dates, and footnotes. As with any good history, the book is prodigiously researched down to specific letters, newspaper articles, and other primary sources. Special consideration is also given to how military history, for example Cromwell’s Irish campaigns or the 1715 Jacobite Rebellion, played into white slavery’s proliferation in America.

Despite its title, White Cargo also eschews any political messaging or calls for white identity. Instead, we get an abundance of detail which enable readers to transport themselves back to this unjustly forgotten period of history.

For completists only, this is the most extensive history I have seen of white slavery in the New World. About as long as the previous two books combined, it’s good for the nuts and bolts (and dollars and cents) of indentured servitude: the policies, statistics, trends, and procedures, with less emphasis on authorial license to develop a cohesive thesis or overarching argument. A bit dry and academic, but an excellent resource for further study, and one which I often return to during my research. Unlike the previous two books, Colonists in Bondage also discusses non-British indentured servants, many of whom were German, and delves into the different types of white servitude in the New World.

While admitting that white “servants” — Smith refuses to call them slaves — were “grievously exploited” and that 50-75% of them died while still in bondage, Smith cannot help but to almost justify indentured servitude with elitist passages like this one:

But the majority of servants would naturally be more or less worthless individuals who drifted into the colonies as a last resort, who were kicked out of England by irate fathers or expelled by the machinery of Bridewell and Newgate. These were the servants who had to be whipped for idleness, who ran away, committed thefts, and disturbed the peace.

So, read with caution, but do so if you want to get to the bottom of the topic of white slavery in Colonial America.

4. The Forgotten Slave Trade: The White European Slaves of Islam (2020) by Simon Webb

Webb’s emphasis in this volume is to un-erase the folk history surrounding Islam’s white slaves. Currently, ignorance reigns supreme among educated whites regarding how Muslim raiders and traders victimized hundreds of thousands of whites for centuries. It was every bit as brutal and cruel as the enslavement of blacks by European whites, if not more so. Playing directly into this essay’s thesis, Webb argues that by no longer teaching the bitter history of white servitude in the Ottoman Empire, our elites are instilling unfounded feelings of guilt among whites and unjustified feelings of entitlement and resentment among blacks and Muslims.

Webb offers a brief history of slavery, which — unlike murder, adultery, theft, and fraud — has never been condemned by any society until relatively recently. And since Muslims were prohibited from enslaving other Muslims, the Ottoman Empire gobbled up as many slaves as it could through conquest or outright theft.

Webb discusses the janissaries, abducted Christian children who were trained to become soldiers of Muhammad. He discusses the corsairs, the speedy ships which Muslim slave raiders would sail along the European coastline while hunting for white slaves. This, he avers, was part of a coordinated effort to subjugate Europe rather than merely independent privateers trying to strike it rich in the slave trade. Webb covers the abject horrors of slavery in the Ottoman Empire, especially for those poor souls doomed to become either galley slaves or eunuchs after having survived the Empire’s infamous castration houses. He also recounts the famous Barbary Wars in which Muslim states provoked Western powers in the nineteenth century by abducting and ransoming Christians on the high seas.

Webb is also a novelist, and so imbues this work with excitement, suspense, and enough narrative detail to make the story of Islam’s white slaves truly unforgettable.

This book has become somewhat famous among dissidents as being the source of the 1.25 million claim — that is, the claim that between 1500 and 1800, Barbary slave raiders abducted between 1 and 1.25 million white Christian souls destined to become slaves across the Muslim world. Davis did the historiographical legwork to be able to tally such a sum. It is a remarkable achievement, as well as a spellbinding read as he walks the reader through his plethora of primary sources in the first chapter.

Beyond this, Christian Slaves lacks some of the riveting drama and action found in The Forgotten Slave Trade, but more than makes up for it in completeness. Where The Forgotten Slave Trade has a noble purpose in mind, Christian Slaves is merely history, pure and deep. Davis is a professor of Italian history, and so brings an Italian perspective and many Italian sources to the work.

The level of detail in Christian Slaves is impeccable, such as with Davis’ description of how Muslim raiders would haul off church bells in conquered towns not merely for the copper but also perhaps because Muslims “abhore the ringing of bels, being contrary to their Prophets command.” Here, Davis quotes a 1614 slave memoir not merely to flesh out the action with a profound psychological insight, but also to reinforce his theme of the clash of vastly different civilizations.

Another theme is the vengeful animosity Muslims felt against Christians during this time period, one which Davis never stops emphasizing. If anything, this is the book’s point. After they had finally been kicked out of Spain at the end of the fifteenth century, many Muslims attacked Christian vessels and coastal cities, just because. It was war. And war to the Muslims meant slavery, whereas this was not necessarily so among the whites. Davis covers the atrocity and horror of slavery in the Muslim world, and does not flinch. A crushing read, and a sine qua non for students of white slavery.

» Get Your Hands Round This