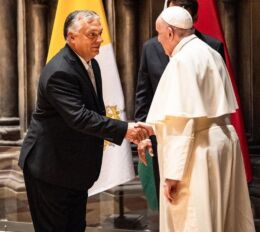 An enemy will always pressure you to act against your vital interests — whether by words or by force. Pope Francis proved to be the former kind — as if there were still any doubt — on Sunday, September 12 during a very brief, seven-hour visit to Hungary. He celebrated a mass before thousands of Hungarian Catholics at Budapest’s Heroes’ Square. Hungarian Prime Minister Viktor Orbán had a front-row seat, and later spent 40 minutes with the Pontiff, along with Hungarian President János Áder, at the Museum of Fine Arts in Budapest.

Anyone up on the state of global politics these days will understand why the Pope’s meeting with Orbán and the Hungarians was as tense as it was brief. The Pope, in the past, has regularly criticized nationalist leaders such as Orbán for not opening their nation’s borders to migrants, especially Muslim migrants, who seek asylum and a better life in Europe. The Pope is in effect a globalist tool who, like all good Catholics, ignores the homogeneity of race as a key ingredient in functional societies. Catholics are called catholic for a reason, and sadly, Pope Francis attempts to live up to this universal and entirely unworkable ideal.

Muslims from North Africa and the Middle East have been the enemies of Christendom for centuries, and all the crime, rape, terrorism, and sexual slavery they have introduced into Western Europe has apparently failed to move the Pontiff into reversing — or at least questioning — his destructive pro-immigration stance.

According to the The Guardian:

Pope Francis has urged Hungary to “extend its arms towards everyone” in an apparent veiled critique of Viktor Orbán’s anti-migrant policies, as the pontiff began a four-day visit to central Europe in his first big international outing since undergoing intestinal surgery in July.

The Guardian reported further that, towards the end of the mass,

Francis urged Hungarians to remain steadfast in their religious roots, but not in a defensive way that closes them off from the rest of the world. “Religious sentiment has been the lifeblood of this nation, so attached to its roots. Yet the cross, planted in the ground, not only invites us to be well rooted, it also raises and extends its arms toward everyone.”

He said people should stay firm in their roots while “opening ourselves to the thirst of the men and women of our time”. “My wish is that you be like that: rounded and open, rooted and considerate,” he said.

Like a bad Catholic, however, the Pope fails to ignore competing religions, religions which could and have undermined the Pope’s stated goal of strong family values and tradition. The fact that he lobbies for the rights of Muslims to invade and eventually dominate the West speaks for itself. Does he not realize that a Muslim-majority Europe will not tolerate Christianity at all? Does he not realize that his open-borders stance works against Christian interests, not to mention white ones?

He also met with Jewish leaders in Hungary, completely forgetting that the liberal, Left-wing Jewish diaspora, through its power in the media and academia — even in places like Hungary — have done the most to undermine traditional Catholic family values through the promotion of anti-white racism, pornography, and LGBTQ and transgender rights — to say nothing of the Jews’ own support for Muslim immigration into Western nations (but not, of course, into Israel). Double standards mean nothing to those globalists who, for some reason, believe they know better than the people what’s best for them.

Of course, this should come as no surprise. In July 2016, a 19-year-old Syrian Muslim named Adel Kermiche entered a Catholic church and slit the throat of its priest, Jacques Hamel, as he was celebrating mass. The killer and his fellow terrorists recorded a video of this heinous act and then took hostages, preaching in Arabic from the altar. This happened less than two weeks after a Tunisian Muslim rammed his car into a Bastille Day crowd in Nice and killed 84 people. The Pope’s response to this clear act of anti-Catholic terror was no different than the mealy-mouthed moralistic clucking we got from French President Francois Hollande and British Prime Minister Theresa May at the time.

According to the The Guardian:

Federico Lombardi, spokesman for the Vatican, said Pope Francis “shares the pain and horror of this absurd violence,” adding that the attack created “immense pain and worry.”

Francis issued “the most severe condemnation of all forms of hatred” and said he was appalled “because this horrific violence took place in a church, a sacred place” and involved the “barbaric” killing of a priest.

So words only, and no action. Note how the Pope condemned “all forms of hatred,” not just the Islamic kind, so as to insulate our enemies from blame. He was too cowardly to pressure Muslims qua Muslims not to behave like predatory animals when living in civilized countries. Oh, but he is not too cowardly to pressure the Hungarians as Hungarians to let in people like Adel Kermiche, who will presumably show their appreciation by killing more priests and ramming more cars into crowds.

Viktor Orbán is perfectly correct in resisting the Pope’s suicidal notions. Of course I’m not privy to what went on behind the scenes during this episode, but as far as political theater goes, Orbán and his people made all the right moves. The next day, Hungarian state media mocked The New York Times for mistaking Hungary for Romania in its reporting. And this article from About Hungary sums up the contempt many Hungarians feel for the biased reporting of their country coming from Western sources.

During his one-on-one meeting with Pope Francis, Orbán made sure to get a handshake photo-op, which he quickly posted on Facebook (and where he wrote, “I asked Pope Francis not to let Christian Hungary perish”) and Twitter:

PM Orbán met Pope Francis and presented a letter that King Béla IV wrote for Pope Innocent IV in 1250. The King warned of the looming threat of the Tatar invasion and called for the unity of Europe. He was ignored. 35 yrs later HU fended off the Tatars with great bloodshed. pic.twitter.com/PS8JPTJ4my

He also presented the Pontiff with a copy of a letter from King Béla IV of Hungary to Pope Innocent IV dating from 1243 “which informed the Pope that Béla would strengthen fortifications along the Danube River in Hungary in preparation for a Mongol invasion — evidence of Hungary’s long role in preserving Europe’s Christian roots.”

A clever move. Orbán is clearly making himself and his people out to be defenders of Christianity because of their anti-immigration stance. This is perfectly consistent with history, as King Béla’s letter demonstrates. Muslim migrants are invaders of the West — just as the Mongols were, centuries ago. They destabilize the societies they enter, they bring  all their violent pathologies with them, and most of all, they as a group have no respect for Christianity. How else can a Christian leader protect Christianity other than by keeping such barbaric, anti-Christian hordes out of his nation?

Orbán has frequently depicted his government as a defender of Christian civilization in Europe and a bulwark against migration from Muslim-majority countries. In 2015, he rejected proposals to settle refugees from the Mideast and Africa in Hungary and erected a fence along Hungary’s southern border to keep out asylum-seekers trying to enter the European Union.

Beyond all the theater and headlines, this little incident is revealing in two ways. Firstly, Viktor Orbán and the Hungarians obviously understand that too many races, ethnicities, and religions in one nation can easily destabilize that very nation. During the Middle Ages, Hungary spent centuries at war with the Ottoman Turks, and part of it, known as the Pashalik of Buda, was conquered and ruled by the Ottomans from 1541 to 1699. In addition, the Principality of Transylvania operated under Muslim suzerainty during this time. The Hungarians finally gained complete independence from the Turks only after further fighting in 1718.

According to Infogalactic (emphasis mine):

In these times, territory of present-day Hungary began to undergo changes due to Ottoman occupation. Vast lands remained unpopulated and covered with woods. Flood plains became marshes. The life of inhabitants on the Ottoman side was unsafe. Peasants fled to the woods and marshes, forming guerilla bands, known as Hajdú Troops. An estimated 3 million Hungarians were enslaved and dispersed into the Ottoman Empire.

So the Hungarians certainly know the Islamic fire that our oblivious Argentine Pontiff is currently playing with.

Secondly, the meeting between Pope Francis and Viktor Orbán should demonstrate how completely useless — and indeed, counter-productive — Catholicism has become for protecting the interests of White Europeans. Long gone are the days of Jan Sobieski’s massive cavalry charge at the Siege of Vienna in 1683, defending Christendom from the infidel. The Song of Roland has been replaced by counter-factual egalitarian orthodoxy, ideological universalism, and moralistic platitudes in the minds of Church leaders.

Again, from The Guardian:

Francis referred to that history in his meeting with the country’s bishops, but also urged them to preach a message of openness and dialogue with newcomers. “Diversity always is scary because it puts at risk acquired securities and provokes stability,” he said. “But it’s still a great opportunity because it opens the heart.”

I agree. It does opens the heart. It opens it to be stabbed by people who hate you.