A European View on the War in Ukraine 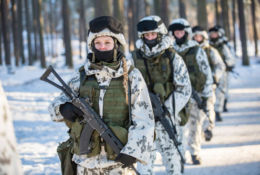 The Finnish army on maneuvers.

I am a Finnish nationalist who has been following the American Dissident Right for many years. I greatly admire and regularly follow many of the superb writers and sites in this milieu. However, I feel that at least some American dissidents do not fully understand the European point of view on the Russo-Ukrainian war.

Some prominent American nationalists support Russia in their war with Ukraine, while among European nationalists, especially in Eastern Europe, there is widespread support for Ukraine. I have seen arguments from the American side that people on the Ukrainian side are simply victims of liberal propaganda, while European nationalists see the support of some Americans for Russia as a sign of ignorance about European affairs.

I am arguing that it is in fact in the national interest of certain European nations to oppose Russia in their war with Ukraine. It is not my intention to turn Americans into supporters of Ukraine, but simply to show that Europeans have legitimate reasons for siding with it. I shall also look at this war in the larger context of the Pan-Western cultural war. I will not make any arguments about the war’s morality and instead focus solely on why it is in the interests of many European nationalists to support Ukraine.

It is logical for an American nationalist to support Russia. Ukraine is in the liberal sphere of influence, and the global liberal democratic system is an enemy of the Historic American Nation, Western civilization, and white nations everywhere. Therefore, supporting an enemy of the liberal regime seems like the right thing to do. The enemy of my enemy is my friend, as the old saying goes. For many Americans, this war between Russia and Ukraine is a battle between a healthy conservative state and the degenerate liberal order. This is not the perspective of many in Europe, however.

My country of Finland shares a long border of approximately 830 miles with Russia. We still have conscription, with most males serving in the military for a period from half a year to a year, depending on the conscript’s role. With a population of only 5.5 million, our defense forces have an official wartime strength of 280,000 soldiers, with hundreds of thousands more in reserve to replenish losses. Our military is focused almost completely on conventional ground war, and there is only one reason why it exists at all: Russia.

Finland is not part of NATO, but does cooperate with it and is a European Union Member State. Our current government, as well as all the major parties except for one and the permanent bureaucracy, are firmly in the liberal, pro-United States camp. This means that in Russia’s eyes, we are a hostile state. In essence we have all the liabilities of being in NATO without the security guarantees that would act as a deterrent. Consequently, I conclude that there is a real chance that Russia could use military force against us.

Even if we were actually in NATO, like many Eastern European countries bordering Russia, the Russian threat would still not be completely dissipated. It is possible that the Russians might gamble that if they quickly take the Baltic countries or Finland, NATO will break up instead of going to full-scale war against Russia to liberate them. It might well turn out that there is no political will to fight for a few small European countries if the cost is a new world war that, in the worst case, could go nuclear.

Our regime upholds anti-white policies, like all the other liberal regimes. A Russian occupation is not a preferable alternative, however, nor is a puppet government or protectorate status. Losing the ability to control one’s national destiny is not something that any nationalist could accept. It is therefore in the interests of Finnish nationalists to reduce the chance of a Russian invasion, and the war in Ukraine offers a way to do this.

If the war goes badly for Russia, it will reduce Russia’s capability to wage war in the future. Firstly, there are the direct casualties and losses in equipment. Western sanctions could also cause the Russian economy to falter, likely forcing them to reduce their defense budget. Finally, large casualties and a failure to achieve their objectives reduces the government’s political capital and the desire for further wars among the population. Iraq and Afghanistan killed any desire for more war among the American population, and the same could happen to the Russians if the invasion of Ukraine ends in disaster.

An American could easily make the counterargument that this is petty European nationalism, and that it is detrimental to the larger culture war being waged throughout the West. Putting national interests above civilizational and racial interests is indeed counterproductive. Let us therefore look at what the war in Ukraine means for the larger struggle.

Ukraine is a sideshow. Whatever happens, it will not have any major impact on the global culture war. The satanic mills of the liberal leviathan will continue grinding just like before. A Russian victory will not diminish their media power, financial resources, or their hold on our institutions. Likewise, a Ukrainian victory will not increase their power in any significant way. The fight taking place within America will not be affected by whether a poor Eastern European country is retained in the liberal sphere of influence or not, just as the Taliban victory in Afghanistan did not have any real effect, either. The only consequence of a Russian victory will be a few liberal tears, which is undeniably enjoyable but quite unimportant in the culture war.

Another claim is that Russia is a conservative ally of ours. The argument is that while the war itself might be unimportant, a weak Russia will mean the loss of an important ally. It is not true that Russia is our ally. They are an old-fashioned imperial state and are only interested in expanding their own power and sphere of influence. They have no desire to see our side win, and I suspect it would in fact be in their long-term interests to see the West’s decline advance to final collapse. Russia itself is not even a real nation-state, but rather a multiethnic empire with a decreasing population of white Russians and an increasing population of non-white Muslims due to birthrates and immigration.

Contrary to liberal propaganda, Russia has not provided any significant aid to European or American nationalists. Russian officials sometimes make critical comments about the West’s wokeness, but that is basically the only extent of their support. A weakening of the Russian state would not therefore affect our side adversely or deprive us of resources.