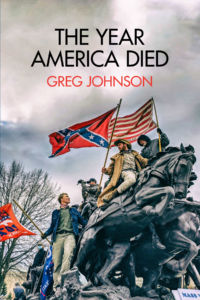 Greg Johnson’s next collection of essays, The Year America Died, will be released in August by Counter-Currents in hardcover, paperback, and ebook versions. We will begin taking orders once an official release date is set.

About The Year America Died:

In 2020, America was hit by three waves of catastrophe: the Covid-19 pandemic, widespread racial violence, and a stolen presidential election, leading to economic devastation, explosions of black crime and white flight in diverse cities, and a government crippled by deep polarization and the stench of illegitimacy.

In The Year America Died, Greg Johnson comments on these crises, explores how a healthy society would have handled them, and explains how they can be used to promote white identity politics.

The book also includes essays on Greg Johnson’s experiences in Norway in November of 2019, when he was detained on orders of the Norwegian secret police (who were working in partnership with antifa) to prevent him from giving a speech.

The crises of 2020 are opportunities for white identitarians, but in many ways, the movement is unable to capitalize on them due to bad ideas, bad organization, and bad actors. Thus the book ends with essays on the pathologies of the White Nationalist movement, including terrorism, accelerationism, paranoia, misogyny, injustice, embitterment, putting personalities above principles, and the follies of “wigger nationalism.”

The Globalvirus
2. How Covid-19 Will Change the World
3. I’m Changing My Tune About Covid-19

The Trumpocalypse
9. The 2018 Midterm Elections: A Near-Death Experience?
10. Why White Nationalists Like Andrew Yang
11. The Iran Opportunity
12. Wignats Whirr for War
13. The 2020 US Presidential Race So Far
14. A Year of Decision
15. Wignat Whexit
16. Trump: Without Illusions or Apologies
17. Is America a Banana Republic Now?
18. After the Election
19. Goodbye, Mr. Trump