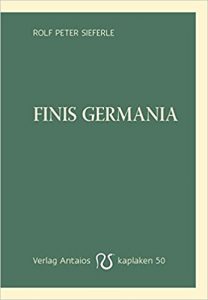 Finis Germania is a very different book from the carefully referenced scholarly works which established Sieferle’s academic reputation. It is a collection of brief personal meditations on what the Germans call Vergangenheitsbewältigung: “overcoming (or coping with) the past,” wherein the past is understood to refer exclusively to the country’s twelve-year National Socialist dictatorship. These meditations were set down beginning in the 1990s, and were last revised by the author in April of 2015, i.e., before the “refugee” crisis of the following summer. Sieferle appears not to have attempted to publish this highly personal work during his lifetime.

The book is divided into four sections entitled 1) Finis Germania, 2) Paradoxes of the Age, 3) the Myth of Overcoming the Past, and 4) Fragments. Each of these four main sections is divided into subsections. This first extract consists of three complete subsections from the first main section. Extracts from the third section, which inspired the fiercest denunciations, will follow.

Progress and the Overcoming of the Past

No one is surprised that in a semi-Asiatic country like Russia, marked by despotic traditions, the combination of ideology and industry was able to lead to monstrous consequences. The horror of revolution, civil war, and Stalinism can be unproblematically ascribed to the premodern character of Russia.  Still less need we get excited over, for example, the Pol Pot regime in Cambodia—what else was to be expected from a backward Asiatic country? German National Socialism, however, is an entirely different case. Had it not been shown, here in the midst of Europe, that the means of modernity could be applied to quite “barbaric,” i.e., inhumane, ends? If Germany was among the most civilized, cultured of countries, then Auschwitz might mean that the humane “progress” of modernity could at any time change suddenly into its opposite.

Thus, at any rate, might a skeptical, pessimistic doctrine from the past be formulated.

The standard version of Overcoming of the Past, however, took an entirely different path. Since this path amounted to a direct continuation of the Allied propaganda of the First and Second World Wars, a traditional, premodern Special Path had to be ascribed to Germany, because of which it was fundamentally distinct from the “West.” This had the primary function of unburdening the modern world from the possibility of a holocaust. Germany was declared a sort of Russia, a land with half-barbaric traditions out of which flowed anti-Semitic resentments and Hunnish cruelty. Tradition, premodernity, and barbarism could thus be ascribed to the debit side of history; Western Modernity, in contrast, stood forth in spotless robes.

From a past construed in such a way, however, nothing more could be learned. As soon as Germany was effectively westernized, the ritual of Overcoming the Past became mere political kitsch, a pure, abstract exercise in righteous (or self-righteous) attitudinizing. It is no longer directed against any real enemy, but instead operates on a purely imaginary front.

For the Left, National Socialism meant the greatest imaginable historical defeat. They imagined Europe c. 1930 as on the threshold of a proletarian revolution. The victory of National Socialism was, therefore, the victory of counter-revolution par excellence: it had thwarted the hoped-for transition, as it turned out, definitively and on a world scale. This was simply unforgivable. That it had done its opponents the favor of staining itself with unimaginable atrocities was to some extent a moral bonus for the Left, from which it draws nourishment all the way to the present day by conjuring a permanent antifascism into existence. 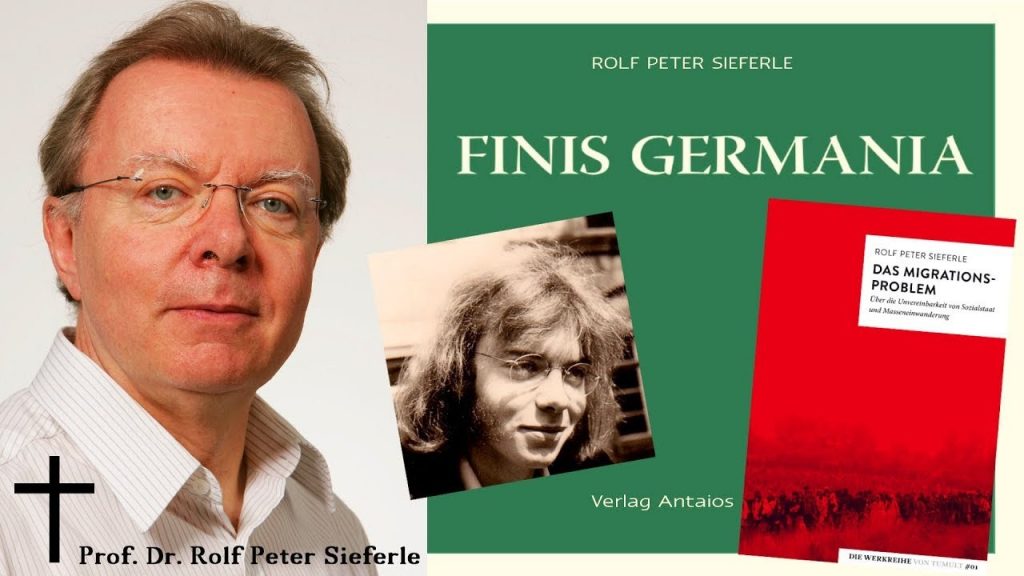 The German Special Path and the Victor’s Point of View

There are tragic peoples, e.g., the Russians, the Jews and the Germans, upon whom the paradoxes of historical processes are carried out in their full severity. Then there are untragic peoples against whom history runs off like water from a duck’s back. To the latter category belong above all the Anglo-Saxons. Only a country with Great Britain’s unshakable self-confidence could openly declare its oligarchic past the cradle of democracy, from which step by step, with an almost stultifying normality and inevitability, the modern world had developed. Only in its naïve American offshoot could this point of view, cultivated in its country of origin only with a hint of self-mockery, be straight-facedly vulgarized into a Theory of Modernization. We see here a remarkable coincidence between a self-confidence based on success and a historical reality from which one has continually emerged unharmed—with no superfluous revolutions, civil wars, mistaken paths or special paths of all sorts, in triumphant harmony with the march of the world. The remarkable thing is that this tedious victor’s pose is being bandied about as the last word in politically correct thinking in a country where one might from bitter experience have had better knowledge of the complications and messiness of real historical processes.

The construction of a German Special Path rests entirely on this Theory of Modernization. This is necessarily the case for purely formal reasons: a “special course of development” is only possible against the background of a normal course of development. Putting this teleological historical hocus-pocus aside, we must accept the fundamental openness of historical situations. If the Spanish had succeeded in 1588, would Drake and Raleigh have stood forth today as unrealistic battlefleet fanatics? Would we be taught the story of the ill-fated British-Protestant Special Path of Development that was fortunately brought back into the normal course of European Christendom? Philip II as the savior of culture from barbarism? The privateers and buccaneers as lawless pirates and war criminals rightly brought before extraordinary courts and burned at the stake?

From the point of view of 1914, similarly, there might have been the real alternative of a German and an Anglo-Saxon Path whereby a German victory might have led Europe into a different “normality.” However that may be—the victory of the West in 1918 and then again in 1945 definitively laid the German alternative to rest, and thus declared it a Special Path that had been overcome.

“Wait,” protests a moralist. “This arithmetic operation is really intended to lessen Fritz’s guilt. In view of the scope of Fritz’s crime however, guilt can not be weighed against guilt. Every mention of the four apples stolen by Ivan must be interpreted as an effort to whitewash Fritz.”

A neutral observer objects: “But isn’t this prohibition of arithmetic calculation merely another form of calculation? Aren’t the four apples Ivan has stolen being subtracted from Fritz’s ten in such a way that the four apples entirely disappear, while the ten apples are entirely preserved? The rules of moral arithmetic must follow a peculiar logic.”

But even here the moralist is at no loss for an answer: “Fritz’s crime is infinitely great. From an infinite magnitude, however, any quantity whatsoever can be subtracted, and it will remain infinite. Thus, Ivan’s guilt is in fact cancelled out by not being mentioned, while Fritz’s guilt remains fully preserved for all time.”