The Long Winter of Liberty 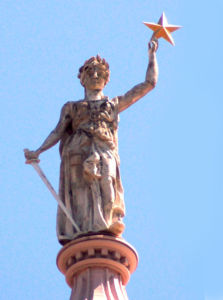 You are much less free than you used to be just a few short years ago; this an irrefutable fact. Almost daily in 2020 and 2021 we have witnessed scenes of tyranny and repression which we would never have thought possible in modern Western states. We have looked on as Australian construction workers were riddled with rubber bullets as they rallied for their right to work without vaccine passes. We have watched tens of thousands of medical workers who were previously vaunted as heroes thrown out of their jobs because they did not comply with vaccine mandates. We have had front-row seats to the creation of a two-tiered system in Austria, Germany, and New Zealand in which the vaccinated have more rights than the unvaccinated.

But this attack on our freedoms goes far beyond COVID-19 and the issue of medical liberty. We are the unwitting victims of an orchestrated and wholesale effort to roll back all our existing rights that is being organized by a malevolent and highly coordinated global elite.

It is no coincidence that as the pandemic raged on, world leaders dedicated weeks to the COP26 United Nations Climate Change Conference in which they aimed to ultimately dictate the food you can eat, the vehicle you can drive, and how you can heat and power your own home. At the same time, the gubernatorial race in the state of Virginia was narrowly decided in favor of the continuing right of parents to choose what is taught to their children as voters rejected the state-mandated imposition of critical race theory in Virginia’s schools. Though the battle in that instance may have been won, the war for parental choice is by no means over. Even more concerning is the fact that two of the most fundamental rights of all were recently put on trial in the United States: the right to self-defense in the Kyle Rittenhouse case, and the right to assemble and legally protest in the Charlottesville civil case. Our overlords have done their utmost to give Lady Liberty a black eye through media and legal intimidation.

Some may say that our freedoms are always under threat; that governments continually test the limits of power, and that this contestation is a natural and healthy part of the democratic process. Yet it is difficult to dispel the impression that there has been a sudden and paradigmatic shift in the nature of the social contract which has been in place since end of the Second World War. Of course, our freedoms have never been absolute, but rather contingent and negotiated. For example, citizens of Western countries implicitly traded away their free speech rights on topics such as immigration and demographics in exchange for material comfort and laissez-faire governance. Yet, the COVID era has torn up the unspoken status quo arrangement while creating a template for ostracizing those who object. As British conservative commentator Peter Hitchens has pointed out, the pejorative use of labels such as “science denier” and “climate change denier” are an explicit effort to evoke and weaponize the perceived moral infirmity of Holocaust denial against those who dare to espouse anti-system views.

At COP26 and beyond, governments are undoubtedly feverishly devising new categories of “deniers” as they seek to forge ahead with their total reshaping of human society. It must be understood that our elites are not simply enacting a political or economic program; they are the acolytes of the cult of modernity, attempting to bring about a complete metaphysical revolution. Their vision of the future is one of atomized human beings who have no a priori characteristics: no national allegiance, no race, no family, and no gender. If our present leaders are not stopped, there will be no aspect of human life that will remain untouched and not a single freedom left unmolested. When we understand everything our enemies have planned for us, it is all the more distressing that many on the Right have unwittingly helped them advance their agenda by fundamentally misunderstanding the Dissident Right’s relationship with freedom.

Faced with overwhelming tyranny on all fronts, some commentators on the Right have chosen to side with their oppressors and fetishize authoritarianism as an end in itself. “If only we welded people in their apartments, as China did,” they lament, “this crisis would already be over.” This line of reasoning is founded on the misguided notion that our current predicament can be counteracted by more totalitarianism and statism, not less. This may seem like quite an incredible position to advocate, but it stems from two related and incorrect assumptions.

The first is that this crisis is an epidemiological phenomenon, and not a piece of political theater. COVID-19 is indeed real, but it is being used as a pretext and a template for premediated radical societal changes.

Secondly, those advocating for more central authority and statism believe on some level that they, or people who adhere to their values, will one day wield that power. They fantasize that a government with the true citizen’s interests at heart could sweep to power, and the pendulum will swing in our favor. They dream of a world in which all the massive machinery of government will be at our disposal so that we can use it to remake society. Comforting though this thought may be to some, it will not happen.

It will not happen because we are not merely opposing a national government, but a globe-spanning system which has locked itself into a death spiral. Every institution is corroded beyond repair, and all political systems are gerrymandered beyond hope of change. Even when candidates who have a small modicum of sympathy for some part of our political agenda do achieve high office, they are rendered completely impotent by the Deep State and the shadow government which subverts and sabotages all their carefully-laid plans. This is distressing for collectivists to hear, and the charge no doubt will be laid that individual liberty is no basis on which to fight back against our enemies’ organized and coordinated efforts.

This is partially correct, but the question of whether the Dissident Right is fundamentally collectivist or individualist is moot. We must use a Janus-headed dialectic and accept that the answer is not either/or, but in fact both. We all have a responsibility to our wider ethnic and national community, but within that polity the engines of European history have been stoked by those practicing heroic individualism. Our ethnic identity is the marble, but the individual is the sculptor of that raw material, choosing whether or not to carve out a place in the immortal halls of our history.

Inegalitarianism is ingrained in the European soul — a race of great heroes and great villains, a stratified family of families in which some are peasants and some are kings. A large variance in the average IQ across many European nations maps onto the chasmic differences between the souls of our people. Yet we are all still bound together in our struggle to pursue our collective destiny. We have dreamed the same dream.

We are engaged in a multigenerational battle for liberty, but the liberties we demand are not the same as those of the liberals and Leftists who have gorged themselves on the freedom to be trivial; to identify themselves purely with consumer choices and sexual fads. We demand the freedom not to be ruled by our intellectual and moral inferiors. We accept the responsibility and ultimate liberation that comes from the freedom to succeed or fail entirely amongst our own kind.

All modernity is a cage for European man because our untrammeled freedom sent us to the stars and reduced nations to cinders. The globalist project was created as a safety valve against the power of organized and motivated European nations — but it has surreptitiously expanded its remit and metastasized into a giant set of shackles upon the entire human spirit, seeking to dictate and control every facet of life. It has designated all who oppose it as criminals and undesirables, and for some on the Right, the persona of the rebel and outlaw sits uneasy. They want to meekly appeal to some distant notion of fairness and to continue to revel in their useless bourgeois respectability.

The mewling of timid conservatism will fall on deaf ears. We are all fugitives and renegades now as Big Tech, Big Pharma, and Big Government work as an iron triangle to corral us all into their prison planet. Our objective at this time is not a lofty one; we are not in a position to remake the world. First and foremost, we must survive the long winter of liberty, huddled together in the face of the tyrannical blizzards and shifting snowdrifts of economic ruin and total loss of freedom. But we can take solace in the fact that the globalist project has overreached; it is hurtling over a cliff. It cannot be reasoned with because it is not rational; it is Frankenstein’s monster, coming apart at the seams under the weight of its own contradictions.

Just as the Soviet Union once seemed eternal and monolithic, our commissariat will crumble and suffer the same fate. Each new diktat from the global headquarters alienates more and more people. Centuries ago, French intellectuals met in smoky and crowded salons to discuss the taboo currents of their day, and in the modern era, unmoderated Telegram channels and Twitter spaces are springing up with momentous pace.

We are outlaws. We are the underground. Here in the catacombs, a great abused and disenfranchised mass is gathering. All those laboring in the dark to throw a wrench into the infernal apparatus of globalism are here. We are waiting out this long winter — and once these snows melt, we will bring about a new blossoming of freedom. All those who stand for liberty are now my brothers, and this unshakeable fraternity will weather this storm together.