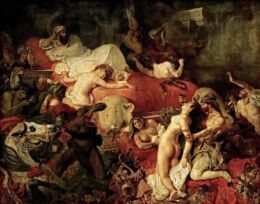 Eugène Delacroix, The Death of Sardanapalus, 1827.

For two entire weeks, my social media profiles have been inundated with hand-wringing over critical race theory, which is now apparently fought over within the halls of education in America. Apparently, people have had enough with critical race theory and are engaged in a struggle to remove it from educational institutions. The push is remarkably non-partisan, but curiously white. People have taken to pointing out that critical race theory is anti-white, which has summoned condemnation from conservative talking heads. Apparently, we are to oppose critical race theory on the grounds that it is Marxist, not because it is anti-white, because there’s no such thing as anti-white. Not even claiming that all white people and all societies they have built are evil is anti-white because that’s just not a thing, and if you believe otherwise, that’s racist, which is collectivist, which is ekshully Leftist. Furthermore, it’s wrong to want it banned from schools and universities, because that, apparently, is censorship and authoritarian and therefore haram.

There will be a push to describe critical race theory as convoluted intellectual Marxist anti-whitism, but it’s quite brutishly simple. White people have created Western societies, and the rules of Western societies discriminate against non-whites, who therefore fail and such failure constitutes oppression. This is what is meant by “systemic racism”: the system itself is racist, requiring no racial animus from white people. There are no crypto-klansmen, no ninja-Nazis, just the dispassionate and cold white system which in its whiteness biases whites towards success and nonwhites towards failure. What is this systemic whiteness which permeates the system? Rewarding skill, delayed gratification, rule-following, working, self-sacrifice, and hedonic continence.

Now, these things may not sound particularly white to you, but apparently, they’re found in greater proportion among whites than among “people of color,” and so any system which favors these traits is systemically racist — discriminating against the nonwhites while favoring the whites. This allows for the existence of “racism without racists,” meaning that there’s no need for gangs of white ruffians prowling the streets and lynching negroes in order for racism to take place. All whites could be perfectly colorblind — hell, they could even be pro-black or supportive of other nonwhites — and still, the system would be racist, because it is calibrated to favor the white behavioral model as opposed to the nonwhite behavioral models.

Apropos, if the whites in the system will not see its systemic bias towards nonwhites, or see it but rationalize it by appeals to equal treatment, colorblindness, or legal egalitarianism, then the whites do not genuinely oppose this system. And this is the racism of the non-racist. Racism under conditions of systemic racism does not look like the klan running around setting crosses on fire, or even rowdy youth posting nigger towers on social media, but rather like white people doing nothing while persons of color suffer under the weight of the racist system. It’s analogous to watching a man getting crushed by a machine, refusing to rescue him, and when accused of letting the man die, protesting that one did not have any part in the construction of the machine, putting the man in it, or turning it on.

Hence, all attempts by honest and well-meaning white people to deny their racism do nothing but add insult to injury. As the frightened white man scurries to produce evidence of his good behavior towards nonwhites, a token black friend or charity to Africa, the nonwhite is aghast at the sheer unawareness of this whitebread who does not even see that it’s not him that’s the racist, that the problem isn’t getting called nigger or even not having black friends, but the system under which white prospers and black suffers. The rules of the system itself, with its prohibitions on what the white man calls “crime” and exhortations to “delay gratification” and “work hard” go against the very fiber of nonwhite and especially black being. It’s all racist, the white man built it, the white man set it in motion, the white man benefits from it, and then the white man has the balls to insist that he is not a racist because he never said the n-word.

There’s precious little theory here, and surprisingly little Marxism. It’s just nonwhites trying to articulate their unease with white society — the Marxism is there for the benefit of the white and Jewish critical race theorists who like to wrap up their petty resentments in fancy-sounding theories.

Now, the typical dissident response to this is that of course white societies favor white people. White people built them after all, and all people build societies for themselves — that favor themselves. Usually, someone will mention that the Japanese system is biased in favor of the Japanese and that the Israeli system is biased in favor of Jews. Others will speak at length about how well East Asians and high-caste Indians have done for themselves in white societies. What’s probably not understood here is that the critical race theorists will agree that white people built their societies for white people and that this is racist because it produces unequal outcomes and if white people just built their societies like that, well, then white people, ALL white people are racist. Maybe that’s the stratagem here, to have the critical race theorists herd the cowering and fearful whites kicking and screaming into the racist camp, whereupon they’ll be forced to turn to racial egalitarianism in order to survive, but personally, I’m a pessimist. We know that in the Stalinist period in the Soviet Union, many political prisoners yelled “long live Stalin” as their final words, even as they were executed on Stalin’s orders. Oh, we might see some impotent opposition, but it’ll likely fail.

From what I’ve seen, the focus is on the theory itself, claiming that its pernicious anti-whitism creates racial resentments. This isn’t true. The reality is that the anti-white resentment predates the theory, and is the result of inequality between whites and nonwhites, which inequality isn’t so much “systemic” as is genetic. Whites have higher IQs, better modes of social organization, more stable personalities, and crucially, we are the most beautiful race. Anti-white resentment exists because we make nonwhite people see their own ugliness and misery by our presence. This existing resentment is then stoked and weaponized by the progressive left, in order to destabilize white institutions and further its own power. Sounds like an academic difference and for the parent fighting critical race theory in his PTA it might not be as important, but here’s why we mustn’t lose sight of it.

When medieval peasants or even nobles revolted against the king’s authority, they never revolted against the king personally, but always claimed to be rescuing the noble king from his wicked advisors, because to do otherwise would be to destabilize the very idea of monarchy. This allowed them to have a change of government without regime change — a nifty trick if your problem is bad governance. But our problem in the west is far greater than just bad governance. Our problem is that we believe in racism. The conservative rebellion against anti-whitism always claims to be rescuing the noble Negro from the wicked real racists in the Democratic party because it dares not upset the fundamental guiding principle of the post-war West, which is egalitarianism, or you might want to call it anti-racism.

However, once you accept the very premise of racism — that preference for the ethnic in-group and distaste for the ethnic out-groups is bad, and of egalitarianism, that all men are created equal, you cannot in good faith deny the charges of systemic racism. The western system, such as it is, produces unequal results across races, distributes material and spiritual rewards unequally across the races and no amount of goodwill, colorblindness, equal treatment, or other platitudes will make that go away. These are undeniable facts, but they’re only problematic if we take the basic moral assumptions of egalitarianism and anti-racism. Once we’ve defeated the concept of racism and expunged anti-racism as a moral imperative from the discourse, then we can build the moral case for defending our societies as we make them

If we want to defeat critical race theory, we must first problematize racism as a concept. This will require something outrageous: actually acknowledging differences between races, and furthermore, asserting that preference for the in-group and distaste for the out-groups isn’t a bad thing, but rather good, natural, and healthy for all people, but especially white people.

In medieval terms, it means we have to actually take up arms against the king. Not his wicked advisors who are the real racists. The king.

« Is Another Conservative Christian Resurgence On The Horizon?

» Hollywood & the Nazis, Part One: We’re All Jews & Germans