Hegel from the Ghetto 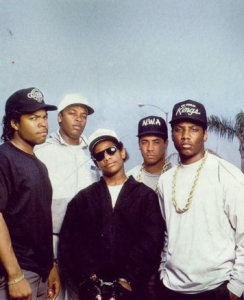 You’d rather see me in the pen
Than me and Lorenzo rollin’ in a Benz-o
Beat a police out of shape
And when I’m finished, bring the yellow tape
To tape off the scene of the slaughter
Still getting swole off bread and water
I don’t know if they fags or what
Search a nigga down, and grabbing his nuts
And on the other hand, without a gun, they can’t get none.

Hands up, don’t shoot: Who here has listened to gangsta rap? Who here has felt energized by gangsta rap? Who here is a little bit nostalgic for the 90s, N.W.A., Geto Boys, Biggie Smalls, and other luminaries of Negro criminality? Who else considers poseurs like Slim Shady and Kanye to be spiritually inferior to all those niggas of yore, despite producing technically superior and even (gasp) original music? Check your skin color. Are you white? Are you less white for liking these tunes, savage and low-quality though they may be? I grew up with a dislike of rap. Only in my 20s did I realize that I didn’t hate rap as much as I hated Kanye and Eminem. Those violent-ass ghetto niggas from the early 90s were, on the other hand, dope.

The reason why millions of young white men emulate these violent criminals, pimps, and dope peddlers who set some naughty words to sampled (stolen) beats is because gangsta rap is the only warrior music out there, outside some of the blacker NSBM. Your typical rap is a conqueror’s badass boast about sovereignty and power. Sovereignty from the white man and his police, sovereignty over other niggas armed with Uzis and AKs who are his posse, immense power to injure the white man, including the po-pos, rising in part from the loyalty of the aforementioned posse of niggas with uzis and AKs, a vast cornucopia of material goods, including but not limited to lowriders, bling, dope, and dead presidents, which power and wealth, in turn, attract oodles of bitches and hoes, who can then be turned towards the accruement of ever more power and wealth through the mystical arts of pimpin’ and ballin’. In short, a gangsta rapper describes the life of a man who bows to no one, especially not the hated white man. A gangsta rap is a princely boast of wealth, power, and sexual capital acquired through violent strife. Each rapper dreams himself in his heart King Nigga, all-powerful, obeyed by the niggas in da hood, feared and respected by the pigs, in possession of unlimited narcotics, money, and vehicles which jump up and down, commanding the sexual lust of all the bitches and hoes, and even the white women, which are all his to do with as he sees fit. Even the stereotypical “hands off my man, bitch” clash between LaTrine and ShaDynasty is part of the boons of being an inner-city Prince. Few things boost the ego as seeing two women fight over who gets to experience your overwhelming sexual prowess first.

The pimps so glorified by the gangsta rapper embody the spirit of the ultimate alpha, of a lion who doesn’t have to work, who is surrounded by women, who work for him and are his property. A lion does nothing but sleep all day and wait for the lionesses to bring him food and then submit to his sexual will. He will, of course, also kill any competing lions and even the male cubs of the lionesses he conquers. This makes perfect sense from a Darwinian point of view. Monopolizing the sexual marketplace is the ultimate Darwinian success. Don’t believe me? Ask our good friend Genghis Khan. Or any of his millions upon millions of descendants.

Gangsta rap is high-thumos warrior music, extolling those who kill their enemies, break free from the white man’s law, and get paid and laid doing it, winning the loyalty of their fellow Negro. Weihan Zhang on Twitter (sadly banned) was fond of characterizing it as “high criminality sports shoe music” in his endearing pidgin. While a chuckle-worthy example of unbridled East Asian racism (all hail), it betrays a Sino-Mammonist’s reductively materialist view of the world. It’s not about the shoe. It’s about power; the power to steal and kill and get away with it, humiliating the police. Even if you get caught, what are they gonna do? Throw you in prison? Prison is nothing more than an opportunity to “get swole,” and maybe learn some more tricks of the trade from career criminals if you are on the younger end. It’s how a bitch-ass nigga gets transformed into a bad motherfucker.

Believe it or not, this is the natural way in which Negroes function. Africa is just the ghetto writ large. In fact, I look at African ultraviolence and the only wrong thing I can see about it is the white man’s involvement. We shouldn’t be dumping aid into Africa, nor should white people be in the line of fire. I doubt aid to Africa does anything but jack the stakes up to the sky, because now, not only will you get the loyalty of niggas and a harem of bitches and hoes, but you also get to become a billionaire milking the white man for his guiltbucks.

What, therefore, is to be done with the ghetto? Two schools of thought are socially acceptable in the West. The progressive liberal will have you believe that more money must be poured into the ghetto in order to make those niggers act white. He, or more likely she, will also make some noises about the sexism and homophobia inherent in rap music, preferring such gelded, tame Negroes who respecc whamen, such as Kanye West, or even the much-promoted authentic Detroit wigger Marshall Mathers whose shtick of being a (gasp) white rapper reminds me of Milo Yiannopoulos’ caterwauling about being a gay Jew on the Right. Snoop and Biggie are too saucy for our blue-haired elite. The second school of thought is the cuckservative school of thought, which believes that the Negro was peaceful and productive, uninterested in violence or promiscuity, until that mean ole racist Lyndon B. Johnson invented the Democratic welfare plantation to make those niggers vote Democrat for 200 years. They, of course, are on the side of the vast majority of peaceful Negroes who are the model of sexual probity; they make noises about “the black family,” as if such a thing existed in the white sense of the word, and will support a police crackdown on “the criminals,” as if it were the violent Negro Princes who were the dysfunctional ones.

Here I want to address the usual objection that pre-1960s American blacks were peaceful, productive good boys, who apparently had a Wall Street in Oklahoma City or someplace. Few understand that this regime privileged the white-admixed blacks who effectively ruled over the blacker blacks, the real niggas, with the backing of the white police. With incentives and with a measure of force, the American Negro was made to act white for a period of some years. And then it all fell apart in the 60s because of that mean ole racist LBJ.

This arrangement fell apart because the Darwinian interests of the blacker blacks, of the real niggas, were threatened by the hegemony of the white-admixed blacks. The violent conquest of power, wealth, bitches, and hoes comes naturally to the African. Little wonder that he made an alliance with the Leftist elite in order to defeat the middle, consisting of whites and white-admixed blacks.

And indeed, in a world where labor is rewarded and violence is punished, the white-admixed black has an edge over his purer co-racial, but without segregation, he’s too much of a Negro to effectively compete with the white man. Contrast that to harsh Africa, where labor is punished and violence is rewarded (not always, not even a majority of the cases, it’s a payoff rather than a probability calculation), where his work ethic and impulse control count for nothing. Racially-segregated America is the only environment in which he can survive.

I contend here that the pathological blacks aren’t the violent and shiftless ones. Indeed, what is referred to as black criminality is the normal and healthy behavior of a young Negro who jockeys for status within his community, striving to better emulate the archetype of the Princely Nigga put forth by the gangsta rapper, which emanates from the Dasein of the African soul. Indeed, the pathological Negroes are the white-acting ones, who lose their African authenticity in order to become poor facsimiles of white people, carved in ebony, shunned by their fellow Africans and coddled by their white “friends” tokenism. Black pathology doesn’t look like Ahmaud “Jogger” Arbery, or even this Shaniqua ranting about “Donald Trunk.” It looks like Candance Owens, Clarence Thomas, and Kanye West. Whether grifting off of the white man’s fantasies of a unitary human nature, or being a genuinely gelded house Negro, these men and women are abominations unto Africanness.

White America has been trying and failing to make blacks white for 400 years, and the track record shows 400 years of utter failure. In Hegelian terms, the dialectic between black and white in America is a struggle; on the white side, to defeat the black by turning him white, which is to say, to rob him of African authenticity and turn him into a pallet-swapped white. If the white man is to win in this duel, the black man doesn’t even retain the honor of having fallen in battle, but becomes the slave of the master-slave dialectic. Gangster rap was a refusal and rejection of this dialectic. No, the black man will not act white, and he will, in fact, inflict death and destruction upon the white man and his law. And if it means the death of the black man, then he welcomes it as preferable to being an “Uncle Tom,” the slave who forgave his master.

Gangster rap is the music of people who choose death over dishonor. It is the music of people who are authentically they. The great defeat of American blackness were the sellouts of the late 90s and 2000s, and the de-fanging of rap by such bitch-ass niggas as Yeezy and Slim Shady, or the newest bumper crop of degenerates and pussies spitting out turd after overproduced turd. What’s left is only the criminality and the rejection of the white man’s law.

White America has only three honorable ways forward with regard to the black question. Kill them all, ship them all to Africa, or give them a piece of America to be the black ethnostate, preferably in confederation with Haiti. I’m inclined towards option 2, as the least bad for everyone involved. Letting the African be an African in Africa means no interracial conflict in either America or Africa. Segregation, apartheid, integration, multiculturalism; these are all pipe-dreams and half-measures. Either all blacks or all whites; anything else means forcing the one to live like the other, which is a sure way to have perpetual conflict.

Anything except separation — a clean break between the races — is to continue on the wrong-headed and dishonorable path of trying to turn the black man white, which is just a fancy and roundabout way of enslaving him.