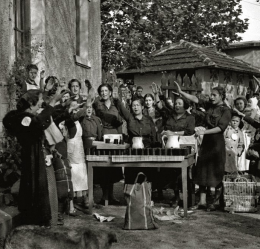 The Falangist Sección Femenina salutes before delivering food to the needy, Pascual Marín, 1937.

Allow me, dear reader, to take you on a fantastic journey to a mythical time known as the “middle tens.” It was a period between 2012 and 2018 when the hottest political movement was populism. All the cool kids were populists, and we were witnessing the rise of something new and exciting, something that would later be described as national populism. This was the era of Brexit and Farage, the era of Jair Bolsonaro and Marine Le Pen, of Matteo Salvini and the Yellow Vest movement. It was the era when a rag-tag gang of disaffected young men memed Donald Trump into the Presidency — or so we believed at the time.

Everyone wanted to rush ahead of this new wave of energy, the Left to defeat it, the treacherous Right to deflate it, the various factions of the Dissident Right to claim it as their own. Is there a warm, fuzzy feeling in your belly yet? That’s called nostalgia. It’s what you get when your glory days are behind you and all that’s left ahead are the many and grueling indignities of middle and old age.

I’ve got more bad news for you. Not only are your glory days over, they were never really glorious to begin with. You got caught in a passing fad that you’ll never live down. Your dad was eventually able to rise above his embarrassing 80s hairdo, but you’ll never live down going full fash. We’re in a big hole, gentlemen. And as the old farmer used to say, the first thing you gotta do when you’re in a hole is to stop digging.

Many got hung up on the word “populist” and its corollary “working class.” Some used it euphemistically, to mean working-class whites. Some took it seriously and operated on the classical definition. Others still used it as a catch-all term for everyone left holding the bag in the great globalist game. It got so absurd that the owners of small industrial businesses were lumped into that great mass of “the working class” or “working-class whites.” And usage of such terms caused significant confusion, least of all on the Dissident Right.

Working from the term “working class,” many became convinced that the way to get ahead of the national populist wave was to adopt working-class politics. The way out would be tried-and-true methods of syndicalism, trade-unionism, and a perennial favorite on the Dissident Right: fascism. It was a way of going full fash without going full fash, or at least without the bells and whistles of full fash, which always invite the slings and arrows of the hostile media. It was a way of being racialist, anti-capitalist, anti-globalist, and for white people (and the right type of white people, at that) which simultaneously mapped onto historic movements generally admired on the Dissident Right and sorta-kinda dodging the unsavory implications of traditional fascism.

Others decided to avoid going full fash by taking possibly the only worse route: full Marx (and then circling back to full fash anyway, because of the whole NazBol thing).

Now, there were problems with this approach. First of all, it wasn’t exactly clear who this “working class” was. As I said before, people used this term, which seemed to naturally grow out of the populist designation, and then based their perceptions of political reality on what it implied. “Working-class” means, in the classical Marxist sense, people who depend on wage labor to survive. The modern, loose term designates people who’ve been left out of, or worst hit by, the enriching processes of globalization.

Now, when Marx and others described the working class, it was primarily an industrial proletariat, people living in large cities and deriving wages from selling their labor to capitalists — owners of capital in the sense of the means of production in its most literal sense: the machines used in the production process. What the working man provided to the company was labor, but because any other working man could also provide labor, the working man was fungible and could very easily be replaced, making him powerless in the face of capitalist exploitation. His bargaining power in the classical bourgeois contractualist model of employment was very low.

Hence, working men collectivized and attempted to improve their position in bargaining by bargaining collectively. The result was trade unions, which were organizations that could compel employers to improve wages and working conditions by threatening to deny capitalists access to labor, just as capitalists had before threatened to deny laborers access to capital. An often-overlooked aspect of unionism was the necessity to maintain solidarity and prevent defections, which unions first maintained based on shared ethnic and religious background. Later, as labor forces became more diverse, more violent means and cooperation with organized crime outfits was employed.

The above history of unionism is what is traditionally meant by working-class and working-class politics. But there are precious few people in America who fit this description today. And what’s more, what wage-earners do exist not only aren’t unionized, but their positions would be eliminated and automated if they did. Most of these positions exist on the sufferance of the political and capitalist class because it isn’t politically expedient to automate them. If, however, fast food workers, supermarket checkout girls, or PowerPoint presentation makers in megacorps were to unionize, their positions would be eliminated and they’d be made redundant, eliminating even the need to fire them.

Donald Trump brought back some of the manufacturing jobs, proving that it is possible to reinvigorate not only a manufacturing economy but also the economic class that depends on it. However, those jobs can also be very easily automated away, or even sent back to China or an even poorer nonwhite shithole with two-cents-per-hour average wages if they should unionize or try to strike.

In the industrial era, the greatest weapon of the working class, for which the ruling class had no answer, was the general strike. Now that weapon is useless. And politics predicated on that weapon — and the now-diminished class that historically wielded it — is worse than useless. To engage in industrial-era working-class politics in an age where there’s no industrial working class to speak of is to engage in cargo cultism, the bane of political movements. Everyone wants to be José Antonio Primo de Rivera organizing the workers in national unions, but that world is gone. The facts on the ground are different now.

A better approach, at least in America and certain parts of Europe, would be to try agrarian populism. After all, 95% of farmers in America are white and they’ve been recently given a rude lesson in racial identity. Now, don’t get too cocky. White farmers have less power than they used to. Big Agribusiness has used every dirty trick in the trade, particularly through pernicious use of intellectual property law over genetically modified seed to bust out the American small farmer and expand their holdings. What’s more, white farmers are economically and culturally encouraged to defect from solidarity by hiring nonwhites, specifically Hispanics, as low-cost farm laborers.

A hypothetical farm strike (withholding of food) by white farmers would, however, make itself heard in the halls of power. While it may not significantly impact calorie production, it can very well hurt food production, specifically the organic, locally-grown food that the elite likes to eat. Not to say that it’d solve our problems or that it is easily attainable, merely that it is both likelier and more potent a strategy than hashing out the old industrial proletarian scenarios. By rebranding as agrarian populists, we can also dispense with the nebulous term “working-class.” Everyone knows who’s a farmer and there’s little confusion that can be injected into that term.

Understanding that a pivot to agrarian populism has its benefits, and would provide new avenues for our movement to make inroads to political power, I see one major obstacle and one major drawback to the agrarian national populist strategy. The major obstacle is the fact that the Dissident Right, for better or worse, is a movement of city slickers. Simply put, we do not understand country ways and country life, which is different from city — or God forbid, suburban — life. This can be solved with humility. We can declare for agrarian populism and then listen carefully to white farmers, rather than lecture them, but we’ll come across this problem nevertheless, just as we came across the problem of suburbanites with a job history primarily in the service economy pontificating about the industrial working class during the national populist period.

The major drawback is that a national agrarian populist strategy is still an attempt to smuggle white nationalism under a thin veneer of economics. Economic nationalism has always been the less-toxified, less-vilified side of nationalism, but it is useless without its cultural and security dimensions, without all of the other sides of nationalism. And let’s not kid ourselves. Economic nationalism means that someone, somewhere will have to take an economic hit “for the team.” How can we do that if we do not clearly define the team? How can we ask white farmers to not avail themselves of cheap nonwhite labor if they do not consider race and ethnicity something worth preserving — if they do not consider other white people to be on the team they’re taking an economic hit for?

This doesn’t mean we shouldn’t explore avenues of action made available by taking an agrarian populist stance. Nor should we abandon industrial workers, no matter how small their number or fragile their position. But if we are to be white nationalists, we must be white nationalists and not make cargo cults or fetishes of economic models or stratagems. We are for white farmers, white industrial workers, white small business owners, white service sector workers, even rich white people. We are suffering economically as farmers, workers, business owners, etc, but we are targeted existentially as white people.

Rich and educated whites have the option of lending their money and social status to the anti-white machine to buy themselves temporary reprieves, but the machine will eventually come for them as well. Far better to have racial consciousness — far better for them to lend their resources and status to the cause of white identitarianism. The age of industrial liberal democracies is over. We are now living in post-industrial racial societies. We cannot prevail in these societies without adapting to the facts on the ground.

I may not have an immediate answer about the organizational form our movement should take, but I can make a definitive pronouncement: whatever works will look nothing like the old, industrial-era populism.

« When They Destroy Memorials, We Raise Our Own to the Fallen

» The de la Poer Madness: Before and After Lovecraft’s “Rats in the Walls”