No Government Subsidies For You, Whitey 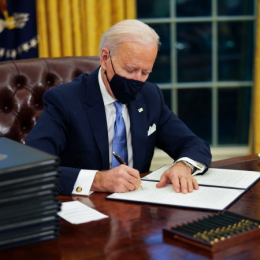 This is the future of public policy in America. Democratic lawmakers will insert benefits only for minorities while white men get nothing. It’s called “equity,” and honkey better get used to it. But the provisions may have the unintended effect of waking up white conservatives to the race war declared on them. There are already signs of brewing revulsion for the benefit, and conservatives and Republicans are deploying language you would’ve never seen in the political mainstream just a few years ago.

The farm aid provision has received the most attention from conservatives. The COVID stimulus apportioned over $10 billion for agriculture relief, with half of it going to nonwhite farmers. The money would go toward debt relief, grants, training, and other assistance for qualifying minority farmers. Black activists hailed it as a victory for their people. “This is the most significant piece of legislation with respect to the arc of Black land ownership in this country,” Black Belt Justice executive director Tracy Lloyd McCurty told the Washington Post. He added: “It’s reparations, but it’s more than that. It is historic. When Black farmers did acquire land through our own grit and determination, the USDA did what they could to erode those gains. Once again, Black farmers, because of their dedication to organizing, have created liberation for farmers of color. Our farmers are due a field of flowers, not a bouquet, for the sorrow they’ve carried.”

The Biden administration argued non-whites needed this assistance because of alleged discrimination. “For generations, socially disadvantaged farmers have struggled to fully succeed due to systemic discrimination and a cycle of debt,” Agriculture Secretary Tom Vilsack said. “On top of the economic pain caused by the pandemic, farmers from socially disadvantaged communities are dealing with a disproportionate share of Covid-19 infection rates, hospitalizations, death and economic hurt.” A particular sticking point is that most of the farm aid delivered by Donald Trump went to white farmers. Left out of the discussion is that whites comprise 95% of farmers; blacks make up less than 2%. This is why the vast majority of past aid went to whites.

The farm aid only offers help to roughly 5% of farmers to make up for past grievances. This is how government policy works in anti-white America.

This bill inspired outrage among Republicans and conservative media.

Even establishment Republicans denounced it. “In this bill, if you’re a farmer, your loan will be forgiven up to 120% of your loan . . . if you’re socially disadvantaged, if you’re African American, some other minority, but if you’re a white person, if you’re a white woman, no forgiveness. That’s reparations. What does that have to do with COVID?” South Carolina Senator Lindsey Graham said in a Fox News interview. Graham is a neocon who always finds an opportunity to shill for more immigration.

“No proof of income or loss incurred due to COVID is needed to qualify. Just skin color or when you came to the country,” Pennsylvania Senator Pat Toomey tweeted. “A white farmer, struggling to get by in Appalachia or anywhere else in the nation, is disqualified because of his skin color. Is this what the Democrats have in mind for ‘racial equity’?” Toomey voted for Trump’s impeachment.

Conservative media have also depicted the subsidy in appropriate terms. Fox News interviewed several stunned white farmers who can’t understand why they can’t get these benefits. “Just because you’re a certain color you don’t have to pay back money? I don’t care if you’re purple, black, yellow, white, gray, if you borrow money you have to pay it back,” farmer Kelly Griggs told the cable news network. “We can’t strike. We can’t stop. That’s the part that really sucks. These people in Washington who make decisions for us and our livelihood have probably never stepped foot on a real farm.”

Griggs just tried to use the least offensive language possible to avoid the racism smears. In the clip, she emphasizes she doesn’t see color and doesn’t understand why the government doesn’t hold the same standard. She doesn’t realize that the system no longer abides by the lone Martin Luther King quote — it definitely judges you on the color of your skin. If you lack melanin, then you’re not going to get that check.

The biggest barometer for the redpilling of normie conservatives came from Steven Crowder. Crowder was a popular alt-right meme back in 2016. Creative trolls imagined him as an extreme neo-nazi when he was really a very basic conservative. But the YouTuber may be turning away from basic conservatism into something more interesting.

He and his co-hosts mocked the idea of black farmers and wondered why alleged discrimination 100 years ago justifies a handout today. They depicted black farmers as thugs who can’t get a job and try to grow Hennessy trees. They even laughed about how blacks have spent most of their history trying to escape the farms. The segment is surprisingly funny and reminiscent of something you would’ve heard on an alt-right podcast back in the day.

Of course, the usual suspects were outraged by Crowder and he was condemned for his “racist tirade.” But Crowder, so far, has not apologized for his jokes.

It’s a new era for the American Right.

One could say this is just vulgar race-baiting and nationalists shouldn’t fall for it. That could be the case but it does show some development within the mainstream Right. They’re at least taking notice that this is both ridiculous and anti-white.

It would be better if they could stop these bills, but unfortunately Republicans don’t control the legislative or executive branches. Several Republicans did try to strip the racial farm aid, but they obviously failed.

This needs to be more of a concern for Republicans going forward. Reparations are already a thing in many areas of the country. Evanston, Illinois, now offers $25k to black residents to apologize for redlining. Oregon, a state that never had slavery, is considering paying blacks over $100k for its alleged racism. President Biden endorsed reparations and his close advisers are proposing massive wealth redistribution to black institutions as part of its plan.

Reparations are coming our way and the Right has to be prepared. The Dissident Right can, of course, be counted on to eviscerate it as anti-white and black supremacist. But can the mainstream Right, the people actually in Congress and in media, do something about it? The COVID stimulus indicates they may try. Their base strongly opposes reparations. Nearly 80% of Republicans said they opposed reparations at the height of the George Floyd protests last summer. That number is likely higher now with the diminished approval for Black Lives Matter.

Ordinary Republicans must realize the hidden stimulus provisions are just the start of racially exclusive benefits. The Left’s operating principle is anti-white racism. The primary purpose of government, according to mainstream Democrats, is to eliminate systemic racism in all its guises. That means more money for non-whites and nothing for whites. . . well, almost nothing for whites. Whites will get Section 8 housing in their neighborhood, but that’s not a benefit.

Conservatives may not want to see color, but the racial warriors on the other side certainly see it. And colorblind conservatives are in their crosshairs. There’s no escape from the new paradigm — the only path forward for white conservatives is to wake up and see themselves as a distinct people.