The Counter-Currents 2022 Fundraiser
Your God, Your Family, & the Green Bay Packers 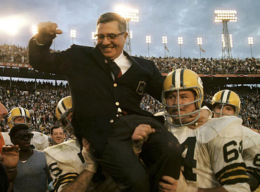 A victorious Vince Lombardi being carried off by his team after winning Super Bowl II in 1968.

Some time ago I had dinner with one of Our Guys. He asked me if I followed the many memes that our movement generates. I replied that I do not. Furthermore, I admitted that I don’t always have time to read every article that is published. I am too busy focusing on attempting to create intelligent content of my own which speaks to the truth of our situation.

In focusing on this great task, I have taken considerable inspiration from the words of football coach Vincent Lombardi, who told his team that their focus should be on “Their God, their families, and the Green Bay Packers.” Now, I don’t follow the Packers or football at all. What is important here is that Lombardi built a framework for his team to follow to make them into a winning team. Lombardi encouraged his players to cut the triviality out of their lives and focus on great spiritual truths: providing for their families and being successful in their job of playing football. Each feeds the other. For example, reading the Bible can give one insight into better raising one’s family, and it also keeps one out of trouble — thus aiding work. Those on a winning football team might then be offered other opportunities that could bring in financial rewards to help their children get through college and so on.

By now, the whole world knows that American whites are under great social stress — conditions that amount to genocide. This was brought home to me when I took two trips this year. The first was to an old Wild West town on the Rockies’ Front Range. The town had all the cultural amenities one could ask, for plus a wonderful climate and a healthy white demographic. In the wealthy part of town — where successful mining and railroad barons had led to Victorian mansions being built during the area’s initial settlement — was a house whose yard was surrounded by razor wire. Prominently placed in that yard was a Black Lives Matter (BLM) sign with the hateful fist symbol.

It dawned on me that a BLM sign behind razor wire means something. It’s not that the sign would be vandalized by the locals, but rather that the sign’s owner was hostile to the community even before BLM got off the ground. Putting up such a sign in such a prominent place behind a military-grade obstacle is an act of tremendous animosity and aggression. The person who lived in that house was of the same race and culture as the people in the town, so his sign was an indictment of a spiteful person’s social empowerment — a collaborator in his own people’s genocide.

The other trip was when I took a train ride from a conference to a large city’s airport in the South. My traveling companion was a fellow from New York City whom I’d recently met. Most of the passengers on the train were sub-Saharans. One of them was an aggressive panhandler. He approached us and begged for a handout. My New Yorker stoically ignored him. I took my cues on how to react from him, as he was an experienced subway rider. Soon, the panhandler was at the back of the car and got in an argument with another passenger. The sub-Saharan voices got louder and louder, and curse words were exchanged. More sub-Saharans were drawn into the ugliness. I half-expected to catch a 9mm bullet from a wildly-fired pistol. Fortunately, the matter died, and we pulled into the station without incident.

It dawned on me that my New Yorker companion had to deal with this all the time. He could easily manage, though. He was tall, broad-shouldered, and well-dressed — not the type of person who gets mugged. Then it occurred to me: He lives in a place where the women and children whom he loved, and who were not tall and broad-shouldered, were under threat from this sort of behavior every time they got on the subway. It was certainly an example of why I write.

There was a time when this behavior was not tolerated. We once had segregated public transportation. After that ended, the police made the subways safe by arresting turnstile jumpers, practicing stop-and-frisk, and arresting beggars for loitering. But this was too simple. The police had naturally focused their attention on sub-Saharans. The usual suspects — the type of person who puts up a BLM sign behind a razor-wire fence — protested, so the police stopped their policies, and now every ride on public transportation is a bigger risk — and not just in New York, but everywhere.

We have a complex problem. This isn’t like when the Russians broke the Mongol Yoke by calling out the Boyars with their armed tenants to drive out foreign nomads. Our own people are collaborating. All Americans sit atop a vast commercial and economic enterprise whose toppling would lead to disaster. Many of our enemies are wealthy people of our own kind who are gripped by a religious mania that ultimately supports white genocide.

There are other issues as well:

There are other problems as well, of course, and defeating these challenges requires every one of our few activists to focus on their God, their families, and the Green Bay Packers — or more accurately, working on being successful in their ordinary jobs as well as their vocation of saving our race.

Doing so takes time and money. Some people can contribute by writing, some by running for office, and some can organize a rally or work for a political campaign. But not everyone can do this sort of work. All, however, can donate. To put it frankly, we need money. This site has enough traffic that if all the visitors who visit it in a single day donated just $20, the fundraiser would be over in 24 hours and we’d be well on the way toward paying next year’s expenses.

Such a sum isn’t insignificant, and it might require cutting back on other things. It requires a focus on what is important verses what is trivial. That focus is what Vincent Lombardi was talking about. By doing so, Lombardi built a football dynasty. We aren’t seeking to win football games; we have a higher purpose. We are focused on making ordinary train rides safe for our families. We are focused on eliminating the religion of anti-white hate. Above all, we are focused on saving our race.