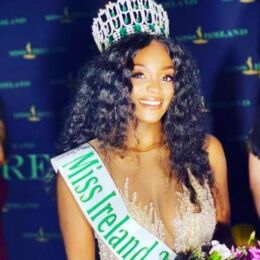 Ireland is a tiny green isle with a population only slightly larger than that of the Atlanta metro area. Its population is 96% white and only 1% black, but in a crowded field of beautiful white indigenous candidates, a black woman born in South Africa with a face that could make dogs bark was recently selected to represent Éire at the 70th Miss World Pageant this December.

Much has been made of the fact that Pamela Uba is the first black Miss Ireland over the course of the pageant’s 70-year history, but the fact that blacks make up only one percentage point of the nation’s population means that Negro lasses are still overrepresented as Irish contestants, and if there is any justice on the planet, the Irish will wait at least another hundred years before they dare pick another pickaninny lady to represent them.

The 26-year-old Uba, who is described vaguely as a “medical scientist,” came to the land of leprechauns and bare-knuckle boxers at age seven from Johannesburg. At first, she claimed it felt “strange” that she “couldn’t hear gunshots” in Ireland like she had in her ancestral homeland. 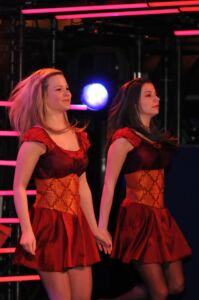 A couple of the millions of Irish lasses who the authorities believe are less beautiful than Ms. Uba.

Despite the fact that she stepped on the necks of so many gorgeous indigenous Irish maidens in her quest to present the world with yet another black token, and despite the fact that the current Miss South Africa is a dark Negress with the unpronounceable name of Shudufhadzo Musida, the new Miss Ireland still made a point of noting how she’d “experienced racism” in the country that saved her from the shithole that is her land of birth and was generous enough to crown her their beauty queen:

I am so grateful I can show girls that [color] is not something that holds you back and it doesn’t matter where you come from, the world is your oyster. . . . I’ve experienced racism, and it’s horrible to hear people telling me to go back to my country when I’ve worked so hard to make Ireland my home.

It’s looking as if the only way to maintain Ireland’s current demographics is to convince Africans that the island will capsize if more of them move there.

Despite the fact that the once-mighty British Empire conquered more land mass than any other empire in history, the Spaniards were once such noble conquistadors that 100 million more people across the globe now speak Spanish than English.

As someone whose undiagnosed masochistic tendencies have led me to choose a vocation where I track wokeness across the planet, I’ve often noticed to my dismay that native Spaniards are among the most hysterical practitioners of social-justice psychosis. Give them an excuse — even if it’s based on a false premise — to run shouting into the streets about some perceived injustice, and these greasy bastards will whip themselves into unbridled conniptions.

Case in point: Last week, an unidentified male homosexual told police in Spain that anywhere from four to eight hooded homophobic thugs attacked him at his doorstep in broad daylight, slashed his lip, called him a “shit-eater,” and carved the word maricon (Spanish for “faggot”) into his buttocks. In its headline about the allegations, the gay magazine Out reported the event as if it had actually happened: “Hooded Men Carved Anti-Gay Slur Into Man’s Buttock in Horrific Attack,” read the headline. Rubén López, who works at a hate-crime-tracking outfit called the Madrid Observatory against LGTBphobia, called it “the toughest thing I’ve seen in Madrid in my six years at the observatory and my 17 years as an activist.”

Last Wednesday, as thousands of pro-sodomy protesters gathered in Madrid and Barcelona to shout at the Devil and stop the “hate,” the man with the freshly-lacerated buttock admitted to police that, according to the Advocate, “Carving Antigay Slur on His Butt Was Consensual.” So, apparently, were all his injuries: They were the result of rough sex rather than the hooded posse of tough straight thugs that temporarily populated his fever dreams.

I suppose that it’s nobody else’s business when two consenting adults agree to have one of them slice the word maricon into the other’s tush, but running to the police and causing a national uproar about it seems a little gay.

Despite the unveiling of yet another gay hate-crime hoax — and there are plenty of those — Spanish protesters vowed that they would not be deterred from protesting, because if a Spanish protester can’t protest, what else can they do? They insisted that there were many other reports of anti-gay animus and violence in the country, and they didn’t seem to care how many of those were entirely fabricated due to some people’s strange need to feel hated. There were the typical outcries of their lives being at stake the moment they walk out the door, so even if this last reported incident turned out to be untrue, sooner or later, some straight person will kill a gay person and justify their bottomless rage.

Fine. But who exactly is putting their lives at stake?

Exact estimates are difficult to come by, but crunching the numbers from FBI stats on alleged “hate crimes,” roughly eight or nine people were murdered in the United States in 2019 “from sexual-orientation bias.” Extrapolating percentages and raw numbers from this article, it appears that about 513 gay Americans commit suicide yearly. So about 60 times more gay people kill themselves than get killed for being gay. And that doesn’t even account for the 8,000 or so yearly deaths from willing exposure to a lethal sexually-transmitted virus. Factoring those numbers into the equation, a gay person is about a thousand times more likely to die by their own decisions than they are at the hands of some alleged “homophobe” who might even be a closet case themselves.

It reminds one of black people thinking that the biggest danger to blacks is white cops.

A couple of weeks ago I covered the horrific case of an impenitent Negro-egger in Washington State, hoping this was an isolated incident rather than an emergent trend.

My hopes have been dashed.

Uncle Larry Elder, who is running against Patrick Bateman — sorry, Gavin Newsom — in the California gubernatorial election, was recently and quite savagely egged by a white woman wearing a gorilla mask, which makes it even more racist than if she had merely egged him. This photo shows the woman poised to hurl the egg at Elder’s head before, thank heavens, narrowly missing him.

In referring to the incident, Larry Elder revealed that he likes to refer to himself as “Larry Elder”:

Maybe this gorilla-mask-wearing white woman would have thought twice about thoughtlessly wasting that egg if she realized that every time you throw an egg at a black man in America, an African child starves to death.

Has there ever been another nation in human history that felt the need to warn its citizens that its founding documents contain “harmful language,” or is the US setting some kind of precedent for self-hatred regarding the hatred that allegedly lies at the core of its very self?

At the government-run National Archives website, viewers who innocently wish to take a gander at scans of the Declaration of Independence are greeted with a little blue banner running across the top reading, “Harmful Language Alert: see NARA’s Statement on Potentially Harmful Language.”

Clicking on the latter link takes you to a page that warns:

I’ve long said that the world’s most magical journalism comes from Africa, and Africa keeps going out of its way to prove me correct.

During a recent TV segment in the Ivory Coast — yes, they actually have TVs there — the host had a convicted rapist as his guest in front of a live studio audience. While laughing, he presented the publicity-hungry rapist with a shiny black mannequin and asked him to show the audience how he would typically go about raping a woman.

What’s most shocking is the idea that anyone in Africa needs to be taught how to rape.

According to statistics, black girls reach puberty earlier than white girls, but it’s starting to get ridiculous.

Sahara Reporters writes that a man in southern Nigeria “has been arrested by the police for beating his eight-month-old pregnant wife to death during an altercation over dinner on Wednesday.”

An eight-month-old pregnant wife? So now it’s apparent that African girls are having sex at the wee age of only seven months — or possibly even earlier! This is a global disgrace.

The man, described as a scrap-metal dealer and “a drunk,” reportedly arrived home after a long day of drinking and dealing scrap metal to find that his wife, known among locals as “Mama Goodluck,” had not prepared him a meal befitting a drunk scrap-metal dealer. Mama Goodluck reportedly explained to hubby that he’d left her without money to feed their four children, at which point she was forced to beg neighbors for a humble bowl of garri, which is some disgusting-sounding traditional African dish, with which to appease the hunger pangs of her brood of future drunken scrap-metal dealers.

It’s clear why they didn’t call her Mama Goodsense. Prudent African girls don’t start sleeping around until they’ve lost all their baby teeth.