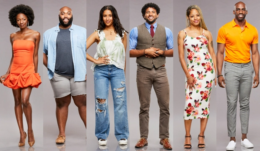 Big Brother is a reality show that has been going for over two decades and is now on its twenty-third season in America. It started as a Dutch show in the late 1990s, and a hugely successful British version began shortly afterwards. The American one first popped up in 2000.

The premise of the show is that they gather 16 people from all walks of life and put them in a house together for several weeks. They are allowed no contact with the outside world. They are filmed 24/7, and the viewer can watch this diverse group of people make friends and enemies, get in fights and love affairs, and have the occasional mental breakdown.

Each week, the housemates come together to nominate two people for eviction. Of the two who get the most votes, they then vote for one of them to be evicted. It’s actually slightly more complicated than this, as there are all sorts of rules, loopholes, and mini-games that can give temporary immunity from eviction to a resident, but that’s the gist. The last person standing at the end of the season wins $500,000 (it was raised to $750,000 this season).

Big Brother has had its share of racism controversies over the years. Sometimes, a houseguest will make a racially insensitive remark, or some edgy social media post one of them made surfaces, or a POC goes whining to the press that the only reason they lost was because everyone else was racist. This is not surprising. If you force a racially diverse group of strangers to live in close quarters continuously for weeks on end, it would be more surprising if you didn’t hear any hasty words.

During the George Floyd riots last year, when the world was in a state of anti-racist ecstasy, CBS made an announcement that they were certain would smash white supremacy forever. They announced that from then on, all of their reality show contestants would be at least 50% POC. This of course included Big Brother. What happened next is not all that surprising to those of us on the Dissident Right, but it is blowing a lot of normie minds.

Big Brother announced their cast for Season 23. There are 16 housemates, and six of them are black. Guess what happened next? If you’ve been on this side of things for longer than 15 minutes, you know what happens next.

And they have succeeded. Last week, 24-year-old fashion designer Alyssa Lopez, Season 23’s last non-black contestant, was voted off the show. The six remaining contestants for the $750,000 prize are all black.

Now, it is normal for contestants on Big Brother to form alliances with one another. This present alliance — which has become known as “The Cookout” — is unusual for a few reasons. First of all, it is explicitly racial and the members of The Cookout made no bones about it. They were quite open about the fact that they wanted a black person to win the show and were forming the alliance for the express purpose of voting off the non-blacks.

Secondly, alliances can be unstable, but The Cookout was remarkably stable. The Cookout was one of the few six-person alliances in Big Brother history where all six members made it to the final rounds. Their alliance suffered no casualties. In Mortal Kombat terms, it was a “flawless victory.”

The Cookout’s success has shocked some normies, who feel their strategy is blatant “reverse racism.” They are half-right. It’s just racism — nothing reverse about it. It’s just unabashed, naked racial tribalism, and there’s no other way to spin it.

But this has not stopped the media from trying.

One angle that they are running with is that The Cookout’s ethnonationalist strategy is justified – indeed, it is karmic justice — for all the racist microaggressions that blacks had to endure in previous seasons. In a Buzzfeed article entitled “No, The “Big Brother” Cookout Alliance Is Not Reverse Racism,” the anonymous writer states:

We never saw any isolation, any bullying. They never harassed any of the non-Black houseguests, which we’ve seen in previous seasons. We’ve really seen in previous seasons people be ganged up and bullied. Again, racial slurs being lobbed at them. And the Cookout is nothing of the sort. This is not about oppressing the non-Black people in the house. It’s about empowering themselves. And that is honestly the true difference between this alliance and some of the other alliances that we’ve seen.

Some have taken it a step further and said The Cookout was justified in using their racial tribalism to make up for the racism of America’s past. Previous Big Brother winner Kaysar Ridha said, “This was an opportunity to correct mistakes of the past. And I’m not talking about CBS, I’m not talking about casting, I’m thinking more on a societal level.”

There is no such thing as reverse racism. Any disappointment from fans about Black contestants having an opportunity to win is only a reminder that we continue as a nation to operate in a divided world, a world where some can set the rules and win, and others must adhere to the rules, even when they change without notice.

Others have tried to paper over the controversy by trying to put a positive spin on it. A black person has never won Big Brother before, so some people — including Big Brother host Chen Moonves — have been claiming that this makes Season 23 a “historic” season. Moonves has also stated The Cookout’s win is also a win for Asians like herself, since blacks and Asians are fellow POCs.

This is one of those stories where I’m thinking, “What is there to say?” This is not because there’s nothing to say about it. There’s a lot to say about it. But the things to say about it are so obvious (blacks are tribal, they benefit from double standards, and so on) that I feel like I’d be insulting your intelligence if I actually said them. Do you really need me to do the ol’, “Just imagine if the races were reversed and six white people tried to vote off all the non-whites!” Do you really need me to say that?

Nevertheless, I do find this story appealing because it is such a perfect microcosm of White Nationalist concerns, and it is presented in a dumb enough package that even the lowest IQ whites can understand it.

Liberals assure us that in our multicultural future, once white supremacy is overthrown, the result will be a more “inclusive” society where all people of all races will have an all-for-one-and-one-for-all attitude, putting the greater good ahead of their tribal identity. CBS showed us what is more likely. They ended white supremacy on their reality shows — and immediately, POCs started leveraging racial tribalism to accumulate as much power and resources for themselves as they can.

« Is the “Civil Rights” Regime Beginning to Crack?