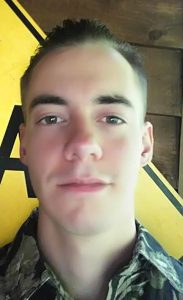 Early Thursday morning, I witnessed an immensely tragic and, truthfully, a surreally disturbing event on Facebook Live. A young racialist comrade, who went by the name Zachary Gromland (not his actual name), livestreamed himself as he needlessly ended his own life. I’m not usually one for watching these live feeds, and quite honestly, after this I’m in no rush to watch any more for the foreseeable future. I am, however, feeling the urge to put proverbial pen to paper and attempt to construct something positive from such a tragic, and ultimately meaningless, loss of life. I don’t pretend to have known the fallen in any capacity, but he was a Facebook friend, racially aware, and to be honest, his posts made me crack a smile from time to time. Suicide is the ultimate black pill, and aside from diminishing an already depleted resource – namely, racially aware whites – it tends to exacerbate the already gratuitous divisions present within our heavily fractured community.

The death of anyone within our movement is a very real tragedy because we are so few in number. Let’s look at this as dispassionately and objectively as possible. Statistically speaking, there are 7.6 billion people inhabiting our planet, and out of these billions of mouth breathers, only 11.5% are classified as being white. Realistically, this means that there are less than a billion white people today, and that number is declining daily (the exact number is closer to 874,000,000). The issue is convoluted, and our numbers are diminished further, when one takes into consideration that many demographic metrics often classify certain non-whites as being white. Therefore the death of any young white person, particularly one who is redpilled, is a tragedy because it signifies a weakening of the collective potential of our race.

Now, don’t get me wrong. The loss of any racial comrade is a tragedy at the personal level as well, grandiose notions of evolutionary and racial fitness aside. The lives of the fallen’s family and friends have been forever and inextricably changed, leaving a void that he once filled. But it has been the response from some within our movement which is the most disheartening. Many of us advocate for the creation of a white ethnostate and for the regeneration of a strong sense of community among our people, and yet, when one of our number dies by his own hand, there are those who mock the very thing that they ostensibly are seeking to create. Formal definitions aside, a community is about the bonds of fellowship that bind us to one another. When one of us perishes, it isn’t something to be mocked and joked about, it’s something to be mourned. Unfortunately, not all of us feel this way, and it’s this lack of community which is the Achilles’ heel of the white racialist movement.

Think about it like this: According to most recent studies, racially speaking, white folks are the most closely-related peoples in the world. In fact, a little over a thousand years ago, we presumably all shared at least one common ancestor.[1] If this fact doesn’t signify the deep racial bonds that we all share, then I’m not sure what does. Statements concerning racio-genetic relatability aside, as a group we’re already infinitesimally small, marginalized, and ostracized by a society which feels that our collective worth is on the same level as horse dung.

I think that it’s important to remember that those within our movement – all of those within our movement, including both the living and the dead – possess the unusual strength of standing for the truth. Recent scientific research has confirmed that all humans are ethnocentric as a matter of evolutionary fitness, yet quite paradoxically, in stark contrast to all the other races on the planet, the majority of whites can’t and won’t admit this very real biological fact. Whites may account for just under twelve percent of the world’s population, but the precious few of those who are truly racially aware are not easily replaced. That alone makes each of us worthy of respect.

The great Roman Emperor and master of all things Stoic, Marcus Aurelius, wrote in his Meditations: “You have power over your mind – not outside events. Realize this, and you will find strength.”[2] I cite this oft-cited quote because it is illustrative of the bifurcation which permeates the totality of white consciousness. On the other hand, it also underscores that we have the power to control the direction of our lives, at least as they relate to our own actions, and more importantly that the actions that we take are uniquely our own. In historical terms, the real strength and glory of the white race has been the agency of our people and our ability to set lofty objectives and – against all odds – achieve them. This is the Faustian nature of the European soul, and it has well served the interests of the white race since time immemorial.

Inversely, this also helps to explain why some of our kin react so bizarrely to tragic events, particularly to those which are self-inflicted. It should be noted that Aurelius, like all ancient Stoics, believed that suicide was honorable when committed under the right circumstances – but that’s a discussion for another day. But viewing this quotation in relation to the recent suicide of a member of our tribe, as whites it is in fact our very agency – our actions as a representation of our will – which for better or worse tends to cause schisms within our ranks, particularly during times of crisis. More specifically, collectively we as whites recognize that our race possesses a unique potential for self-directed action, of the exertion of our will upon the world, and when this gift of cosmic proportions results in tragedy, there is a propensity for some of our folk to react negatively, or even derisively.

I imagine – or rather I’d like to imagine – that some of this indifference emanates from the notion that if, as a race, we uniquely possess the ability to manifest our own destinies, then why do some willfully elect to squander this gift? This is a question which has long plagued philosophers, and a question that I intend to only cursorily dive into here. As racially-aware whites, many of us are lacking the real-world bonds, and thus the communities, necessary to materially, emotionally, and spiritually support ourselves, something that we could have taken as a given in previous eras but which has now been robbed from us. For many of us, the virtual realm is the closest thing we have to such a community. And this is why the formation of a white ethnostate is an absolute imperative if we truly want our race to endure. In times past, the white world was better able to deal with tragedy because of the shared bonds of community. The civility and decency that undergirded white civilization might not always have been explicitly acknowledged or readily apparent, as it was simply regarded as the ordinary state of affairs, but it was certainly practiced by the majority of our folk for centuries.

With the above in mind, the so-called Franco-Ottoman alliance between the French monarchy and the Ottoman Turks that was formed in the sixteenth century wasn’t just scandalous, but it was, in the words of Carl Jacob Burckhardt, “sacrilegious” given that the French allied with racially alien and heathen peoples against their own racial kindred. Whites have been killing each other for a very long time (in this they are hardly alone, however). The two World Wars, more aptly termed “European civil wars” by some historians, graphically and abysmally demonstrate this point. Historically speaking, however, the success of European civilization was and still is due to the agonal or competitive nature intrinsic to the white race. There has always been much infighting among Europeans, but by and large this was still done with an understanding that we are all members of the same greater, extended family. One can see this in the practice of knightly chivalry. Under this code, violence was predicated upon a very refined and precise set of rules. The white race conquered the world and has long maintained global hegemony because our intraracial competition made us strong, but it was always conducted within the confines of a code of honor, and this brought about the robust hypertrophy which is the hallmark of our warrior race.

As a result of the insertion of extra-European forces into our once-homogenous world, however, this implicit sense of racial interconnectivity and community has largely evaporated. And even before that, we put aside the old chivalric codes and set about annihilating each other in the first half of the twentieth century, and this process of dysgenic dissolution destroyed the best and brightest of our peoples, laying bare our breast for the swords of our enemies. The killing fields of Verdun represented something far more insidious than anything that European peoples had inflicted upon each other in earlier times.

Writing in Metaphysics of War, Julius Evola states that war is justified by its ability to awaken the warrior from within, by “[breaking] the routine of comfortable life; by means of its severe ordeals, it offers a transfiguring knowledge of life, life according to death.”[3] This is no longer the case, as today we wage a new and unprecedented type of war. Today’s wars are not based upon the trials and tribulations of physical combat, but rather are reflective of a society made sick by alienation from its past. The superstructure of chivalry and of white racial kinship has been laid asunder by the atomizing forces of dissolution that have been unleashed by the neoliberal worldview. If one acknowledges that the white world of today has been led so far astray that it has been beguiled into believing that race itself doesn’t exist, how can any sense of racial harmony and community exist? Quite simply, it can’t. Ernst Jünger wrote that the measure of man, given the security, comfort, and ease of the modern age, is the endurance of pain. But what purpose does the capacity for pain serve in a world severed from its racio-historical past, and from any real sense of community?

We fight one another like jackals, but we do so in a brave new world, one separated from the underlying codes of conduct and sense of community which in times past tempered excesses. We turn on each other at the drop of the proverbial hat, often over trivial matters such as plebeian politics. Some within our movement are doing a great disservice to our race, the very race they claim to love and cherish, by making a mockery of the death of one of their own – something that is symptomatic of a much larger problem stemming from the lack of civility, which repeatedly tears our movement asunder. Putting petty differences aside, in the end all of us have the same ultimate objective: a return to the normality of times past, not in the temporal sense, but in terms of worldview. In order to regenerate the greatness of our race, we must reorder ourselves, both at the individual and collective level, back into the organic hierarchy and codes of conduct that defined the world of our forefathers. And the first step towards achieving this is to admit that ALL WHITE LIVES MATTER!

So, in memory of Zachary Gromland – quoting what were among his last words – here’s to the “Holy Roman American Space Reich.”

[3] Julius Evola, Metaphysics of War: Battle, Victory, and Death in the World of Tradition (London: Arktos, 2011).