Why They All Look Alike to Us 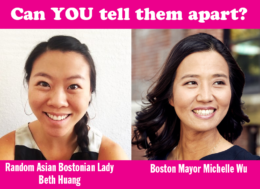 According to Merriam-Webster, to “discriminate” means to “mark or perceive the distinguishing features of . . . to distinguish between another like object.” Basically, discrimination is the simple act of telling the difference between things. But wait — discrimination is supposed to be wrong, right? Due to an incident last week in Boston when a protestor mistook an Asian woman for the city’s newly-elected Asian mayor, suddenly it’s racist to not be able to discriminate.

I diligently try to keep up with these rules, but they make it maddeningly hard to be a consistent, devoted racist.

Neither Boston Mayor Michelle Wu nor random Asian Bostonian lady Beth Huang embodies the epitome of Asian female beauty. Both of them are a bit pan-faced and toothy. Beth Huang is a self-described “card-carrying socialist” who attended a press conference on Boston Common last Monday to support election-day voter registration, which proponents say would help bring in more black and Hispanic voters — in other words, she was there to support a policy that was race-specific and intended to give non-whites more voting power. If “racism” were to be defined in sincerely colorblind terms, she was there to support a racist policy.

During the press conference, a male said to be wearing sunglasses and a facemask — but who was not racially identified — allegedly started shouting that the ACLU doesn’t care about minority populations, which would suggest an affinity for non-whites on his part. Then he committed the grievous racial categorization error of mistaking Beth Huang for Mayor Michelle Wu and began heckling her: “You’re a political puppet . . . Why don’t you look into it, Mayor Wu? Look into that — you’ll find the truth, Mayor Wu.”

Mind you, he did not attack Michelle Wu, nor her body double, for being female or Asian. He even expressed concern, however half-assed, for Boston’s minority populations. His only mistake was to commit the eternally comical racial blunder of “they all look alike to me.” This was, of course, enough evidence of poisonous, bare-fanged, rabid racial hatred for the Boston Globe to write, “Monday’s incident appeared to succinctly highlight the sexism and racism Wu, the first woman and person of color elected to serve as mayor, has experienced since taking office in November.” Masslive, almost as if they were receiving talking points from the same person who ghost-wrote the Boston Globe article, said, “the brief incident encapsulated the misogyny and racism that’s been repeatedly hurled at Wu — Boston’s first Asian-American mayor — since she announced vaccine mandates to keep residents and city workers safe from the ongoing COVID-19 pandemic.”

“If only being a 5’4″ Asian woman imbued in me the powers of being mayor of Boston,” Beth Huang wrote on Twitter, to which Mayor Wu replied, “We should make some good trouble with this.”

Although Wu’s election late last year was seen as “a step toward fixing Boston’s racism,” people also saw fit to carp that she isn’t black. But just as luck and an intransigently racist country would have it, she has been both “flooded with racist comments” and “bombarded with racist comments” ever since announcing that people entering indoor spaces in Beantown needed to be vaccinated starting in January 2022. Wu also told Boston Public Radio that every time she opens her phone, she “receives another dozen hateful messages.” She even referred to the racist blowback as a “national descent of hate.”

Okay, this finally sounds promising. So what did they say?

Dearest readers, I trust you know me well enough that I have spent all the time I could afford to unearth the most absolutely repulsive racial slurs to both “flood” and “bombard” Michelle Wu, but the best I could find were these, and they were from random comments sections and not directly communicated to Wu:

“Communist Wu needs to go back to China.”

“Another oriental in a govermment [sic] position. [I]s it me or are there way more oriental people within all facets and levels of influence . . . Has China already taken over or are they getting situated to take control of everything[?]”

So they’re saying she’s Chinese and is loyal to the nation from which she is descended. That’s the tamest “national descent of hate” I’ve ever heard.

According to Wu, her neighborhood has been besieged with noise-making, rabble-rousing, anti-mandate squatters who chanted “Happy birthday, Hitler” outside her house.

Okay, so she’s being compared to Hitler, the most infamous “racist” in history. So they’re calling her a racist, which is clearly not intended as a compliment. But that means she’s the victim of racism here. Again, I’m not even sure whose side I’m supposed to take in order to not be racist. These rules are fucking with my mind something fierce.

Make no mistake, the relentless threats of violence and hateful attacks on Mayor Michelle Wu and her family have no place in our society and are a far cry from the political debate and peaceful dissent that is welcomed and necessary in a healthy democracy . . . To remain silent is to be complicit, and as elected officials of color across the City of Boston, we will not stand by and watch as openly racist, anti-Asian and sexist rhetoric is normalized in our community. . . . This type of vitriol, toxicity and hate is far too common for women of color in politics, and we can’t help but wonder if the same toxicity and vitriol would be directed at a mayor who wasn’t a woman, a person of color, or an unapologetic history-maker like Mayor Wu is.

“Relentless threats of violence . . . vitriol, toxicity, and hate.” Goddamn, that sounds dramatic. This level of teasing borders on cruelty. It’s like describing a seven-course meal to someone who hasn’t eaten in a week.

It’s highly suspicious that none of the news accounts made any attempts to racially identify the masked protestor who mistook one plain-faced Asian woman for the plain-faced Asian mayor. One would suspect that if he had been white, we already would have been informed of it ten times over. Since he expressed concern for minorities, it’s possible that he’s black. It’s almost a sure thing, though, that he isn’t Asian.

Assuming he’s not Asian, it’s perfectly natural that he had trouble distinguishing between two Asian women. Members of all races are more adept at telling the difference between their co-ethnics than they are telling the difference between members of alien tribes. Studies have shown that in police lineups, people are much more successful identifying perpetrators of their own race than they are at identifying those of other races.

This is known as the “cross race effect” or the “other race effect,” and has been replicated in studies going all the way back to 1914. This tendency does not discriminate; all races do it:

The cross race effect is thought to be a product of evolutionarily bred in-group favoritism, which would make it more psychologically expedient to classify all members of a competing group as simply one amorphous and indistinguishable blob of protoplasmic “other.” It’s a time-honored way of dehumanizing a competing group. And it’s a strong impulse — humans are said to notice one another’s race quicker than they notice gender, age, or facial expression.

But although Mother Nature has already made it difficult for us to tell the difference between Asian women, the Asian women aren’t helping matters, either. If they, despite their demonstrable economic and social privilege, refuse to stop whining about “racism,” they’re going to make it impossible. They’ll all blend into the same whiny Asian bitch. But at least that will signal the end of discrimination against — or at least between — Asian women.