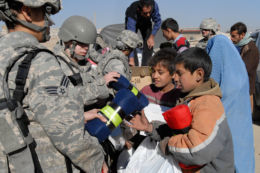 I observed a fascinating dichotomy on an afternoon flight out of El Paso International Airport. A sizeable group of Afghan refugees, having just completed a stay on a nearby military base, filled the terminal; they were en route to their final destinations in name-your-city, USA. International Organization of Migration (IOM) employees in their blue “I’m doing good” vests guided the families through the airport; some even had US Army officer escorts.

Though more than likely unintentional, the selection of El Paso as a point of departure for the refugees was a bold one. Fort Bliss, home to the US Army’s 1st Armored Division as well as several additional tenet commands, is a mere six miles away. The second most easily identifiable group of people waiting to board flights were active-duty Army soldiers who were stationed nearby, either traveling on duty or on leave. Whether they were corn-fed white Midwesterners or blacks hailing from an inner city, their high-and-tights, slightly embarrassing attire, and olive-drab luggage made them instantly recognizable as soldiers.

This was a striking contrast mentioned: culturally foreign, alien-looking people being escorted past a group of servicemen, many of whom were veterans of the Global War on Terrorism and operations in Afghanistan who had just fought a lengthy war against these very people. It’s one more bit of proof of the patronizing, we-know-better-than-you attitude of our social engineers. What exactly is the government’s narrative toward its servicemen? “Fight these people for twenty years, and now welcome them into your neighborhood?”

This is not to suggest that the refugees are even remotely at fault. They, much more obviously, are also the victims of a condescending ideology that is marauding throughout the globe. The same government who propagates it is now mandating that they need to live in Illinois, Kentucky, or wherever. But has the government vetted these people? Do they believe trans women are women? Do they worship sub-Saharan Africans? Do they believe their children have a right to watch pornography? I guess now that they’ve arrived on the magic dirt of the United States, they do.

Though these refugees were more than likely not terrorists, these are the same people who hated our freedoms . . . one of the many vague reasons that were given to explain why we were attacked on 9/11. Does it make sense to believe that a remote mountain people really cared what we watched on television? Apparently it did to the throngs of young Americans who signed up to fight. How many servicemen, believing our cause was righteous, still think refugees coming to our country is a noble thing? When you’ve put that much skin in the game — divorces, combat wounds, the deaths of friends, killing — you can force yourself to believe almost anything.

It’s all right, though: The soldiers were allowed to board the plane first, and the Captain even thanked them for their service. They funny thing was that in this apparently racist, white supremacist society, no one objected to the presence of the refugees — most of all the servicemembers. No one said anything rude or even gave them a slightly off-color look. If anything, there was nothing but cordiality. Flight stewardesses attempted to comfort the screaming Afghan children, and men helped the migrant women with their luggage.

The concept of invading a foreign country, completely wrecking it, taking in a flood of refugees, and then screeching “RACIST” at anyone who even mildly protests on economic, cultural, or any other grounds has triumphed once again. The only question is, where will the next generation’s refugee-producing conflict take place?

« Counter-Currents Radio Podcast No. 379 Ask Me Anything with Greg Johnson & Endeavour