The New Normal is Abnormal 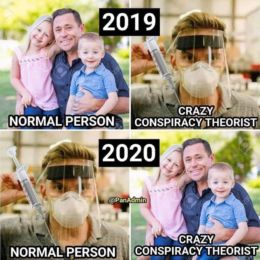 It’s easy to feel like a misfit in today’s world if you’re redpilled. The whole world around you is alien to what you believe. Ads constantly feature gay or mixed-race couples. Sports leagues bend the knee for Black Lives Matter. Family and friends speak of the horror of systemic racism and how we need to end white supremacy. The average person is thrilled with the latest capeshit film. It’s a disorienting world out there, and seeing the truth makes you feel like you’re an outcast.

But we still are the normal ones in an abnormal world. We just lack the conscientiousness to go with the flow. Conservative writer Ed West made an astute, yet overly pessimistic, point about this recently. He argued that the conscientious among us — you know, the people who would’ve been staunch conservatives in the past — are now fervent believers in the new order.

West highlighted English soccer coach Gareth Southgate as an exemplar of this type. Southgate is no Left-wing freak. He’s the archetypal man, in many ways: athletic, assertive, and appealing to all sectors of society. He even wears a suit on the sidelines, a sure sign of lower-case c “conservatism.” But, in spite of his square image, Southgate championed the idea that the English national team stands for a new, multicultural, multiracial identity. “It’s their duty to continue to interact with the public on matters such as equality, inclusivity, and racial injustice while using the power of their voices to help put debates on the table, raise awareness, and educate,” he wrote in a letter about his team last summer.

West argues that Southgate’s adoption of wokeness proves the culture war is over:

That someone like Southgate would support England players taking the knee, the gesture associated with Black Lives Matter, is telling, then, about how far social attitudes have changed in the last few decades. Although Southgate felt the need to write an elegant defence, it’s perhaps more surprising how little opposition taking the knee faced, and how even most critics proclaimed to support BLM’s aims, if not methods. Indeed, it’s arguable that there has never been so little doubt in public life about what is morally wrong and right, at least in our lifetimes.

The year 2020 marked a convenient end to the cultural revolution, because of the vastly different nature of the protests that took place that summer, compared with 1968. In the late Sixties, student radicals were protesting against the system. American academia itself was politically mixed; there were around three Democrat professors for every Republican — it’s now about 15 to 1 — but the higher echelons of the Ivy League were quite conservative. The Boston Brahmin elite were still pretty traditional, as was big business (although, not coincidentally, far more egalitarian than it is now). The Army was obviously very Right-wing, and one of the causes of student protests was the prospect of being drafted into a war to defend the honour of a conservative American establishment.

He argues that the West experienced a cultural revolution starting in the 1960s and that it has ended with Black Lives Matter and #MeToo. Much of his column makes fairly common arguments about the new order being intolerant and demanding moral conformity among all citizens. He laments the loss of relative cultural freedom in the late twentieth century and the fact that comedy is dead. Dissent is no longer tolerated; we’re now in an age more like the 1950s than the free-ish 1990s.

West says this has been accomplished by turning the moral patrollers of the past from church ladies into woke wine aunts:

The way in which the Left had taken the role of the Right was best summed up by Scott Alexander, who asked what happened to the stodgy old conservatives who used to enforce public morality in the Fifties. Where would they be now? Of the archetypal disapproving great aunt figure, he said, it’s hard to argue she is “not a proud leftist by now, still chattering about how scandalous it is that people read books with the wrong values, still giving her terminally uncool speeches to the school board about how they had better enforce her values on the children”.

This is true, but you’ve certainly heard it before. What is more interesting is his point about Gareth Southgate and the conscientious men who promote social orthodoxy. Our society is filled with men like Southgate who will happily parrot the party line about race, gender, and political issues. Much more so than church ladies, men like this inform other men about the proper things to believe and oppose. These men are respected and treated as the standard-bearers of normalcy. What they say is treated as good and normal.

Former NFL quarterback Drew Brees, a devout Christian who caused controversy by opposing anthem-kneelers, enthusiastically took up the League’s social justice activism in his last year of play. He put the name of a violent black felon shot by police on his helmet to support BLM. Brees, along with Tom Brady and many other NFL stars, signed a letter demanding an end to qualified immunity for police, a practice that protects law enforcement from frivolous lawsuits.

This happened after every sports league became a propaganda vehicle for BLM. Even Nascar–a sport with an overwhelmingly white, conservative fanbase — blared race propaganda and cracked down on the Confederate flag.

Other standard-bearers of male behavior likewise followed suit. Senior military commanders now openly praise critical race theory and mandate it for their troops. High-powered corporate executives require it and undergo the anti-white training themselves. These men set the standards for the middle class and what’s considered respectable.

Popular media still relays the stereotype of the stodgy, bourgeois dad who doesn’t like cultural change and looks down upon new fads. They may indeed still be reluctant to see change, but they’re no longer enforcing any old norms. They’re not expecting people to follow the old bourgeois norms about sexuality or religion. The new norms are about checking their white privilege, loving gay couples, and adoring black culture. The stodgy middle-class normie knows this is the new morality and they happily follow it. The abnormal people are those who cling to the old norms. They rock the boat and make their peers look disreputable. Rather than shaking their heads at transgender kids, they rage at people who don’t wear a mask outside.

The normie is no longer normal. They’re in fact quite strange when compared with past generations. We now live in an insane world with insane standards, so it shouldn’t be a surprise that the herd is now also insane.

The American Right is a counter-culture, for all intents and purposes. It rebels against prevailing social norms and gravely offends our new moral guardians. A lot of people like the idea of being a rebel, but don’t like the consequences. It can mean social ostracism and even loss of employment. But the truth is too hard to ignore. One can’t hide the truth behind sports and bro talk forever. Only the true herd animals can say 2 + 2 = 5.

We are normal. What we believe was what most people accepted as true for most of human history. Today’s society is an aberration. However, bear in mind that even though the normies may be brainwashed by the media and “respectable” figures like Gareth Southgate, it isn’t a reason to completely alienate yourself from them. Acknowledging that you’re part of a counter-culture does not mean sealing yourself off in a ghetto. You still have to make yourself presentable to sympathetic audiences, even if they may hold some cringe beliefs.

We need to win figures like Southgate back to the side of sanity. That won’t happen overnight, of course, but once we have figures like him who are willing to stand up for the truth, victory will soon be ours.