The Tale That Wagged the PAWG 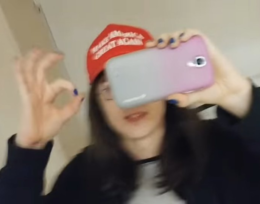 We have another drama article today! Everyone loves drama. Let me rephrase that. Everyone loves drama when it happens to other people. Drama is not always fun when it’s your drama, but drama befalling your enemies is always great. Today we get to laugh at some drama going on in the Lefty sphere.

This article will be something of a continuation of the story and the theme of my last article “The Wignat Strikes Bach,” where I discussed the organization March for Medicare for All (M4M4A) planning to stage demonstrations in over two dozen cities across the country on July 24 in support of universal health care.

Some nefarious prankster managed to infiltrate the organization’s Slack group and tricked their graphic designer into creating fliers saying infamous Nazi turned anti-hate activist Matt Heimbach is to be a keynote speaker at one of their events. When the flier was posted on M4M4A’s official Instagram account, chaos ensued.

Media articles were written about it blaming white nationalists for the infiltration, although I explained in my last article that the true culprit was most likely either Antifa (who believe class-first Leftists are all crypto-Nazis) or Zionists (who are alarmed by the strident anti-Zionism in the socialist community). I ended the article with a warning to white nationalists on the futility of trying to switch sides to the Left by evidence of the failure of Katie McHugh and Matt Heimbach to do so.

The M4M4A/Matt Heimbach story hasn’t got much attention on our side of the internet, but in the Lefty sphere, it is the big topic of discussion. The Left has become completely paranoid about Nazi infiltration into their scene. In the fevered confusion, the Left has turned on one of their own. 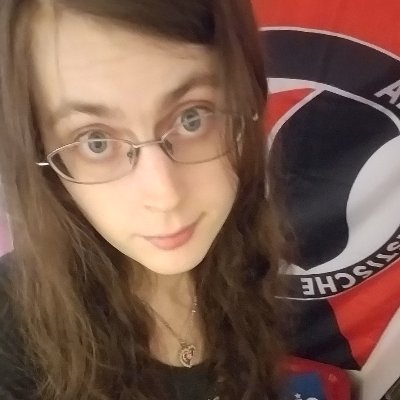 Allow me to introduce you to Andrea (née John) Rovenski. Rovenski is a 25-year-old transgendered communist and anti-fascist activist from North Carolina. They have a YouTube channel under the name of CyberDemon531 and until a few days ago were known on Twitter as @PAWGsForBernie, but now goes by @AndreaRovenski. But before becoming an Antifa communist, Rovenski was. . . kind of a Nazi.

Rovenski first rose to internet prominence in the mid-2010s as a video game speedrunner, at one point holding one of the world record speedruns for Doom. Rovenski was also pretty deep into Right-wing politics and extremely racist. Rovenski ran with a fairly Right-wing crowd, and in 2017, was kicked out of a Games Done Quick convention for wearing a MAGA hat.

Sometime in 2018, Rovenski rebranded as an Antifa communist and became very active in Left-wing politics both online and off. Why is unclear. Rovenski claims that her Alt-Right friends turned on her when she decided to transition. There are other rumors that she was doing some extremely degenerate things during live streams. I don’t know. Kiwi Farms is currently shut down. But Rovenski appears to have established herself within the communist community, and her content is held in high esteem by at least some people.

But then last January, some posts from Rovenski’s Alt-Right days resurfaced… 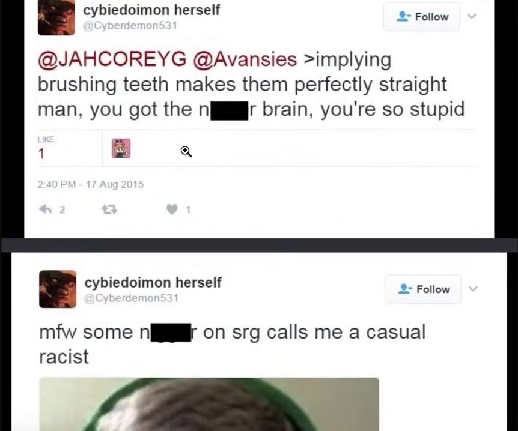 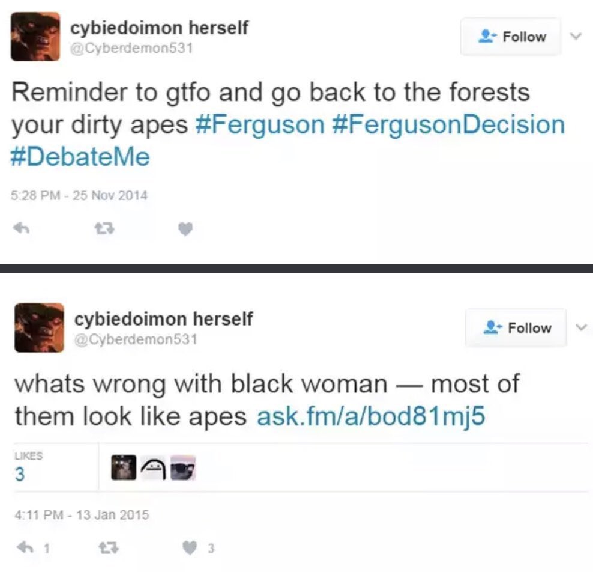 It’s funny that when Leftists (and normie conservatives) get caught in these racism scandals, the things they are shown to have said are often far more inflammatory than anything I ever say. I’m as racist as they come, and yet you don’t see me going around calling people “nigger brain” and telling them to go back into the forest.

Before I get into Rovenski’s explanation for all this, let me try to read this character. When Rovenski got into the Alt-Right, it was the hip and cool thing to do. After Wignat Woodstock (Charlottesville), Rovenski switched to Antifa once that became the hip and cool thing to do. I don’t believe there was any sincere conversion, mere “hey, look at me” dopamine chasing.

I also believe Rovenski is a sociopath. There are certain techniques that all sociopaths use, and you see them all with Rovenski. There are the classic sociopath non-apologies where they admit they did something wrong but don’t really accept responsibility for their actions. There’s the playing the victim, the blaming shift, attacking the accuser’s credibility, and at times, just blatant lying.

Let’s take a look at how Rovenski responded to these revelations. I won’t give you all of it, but we’ll look at some excerpts. 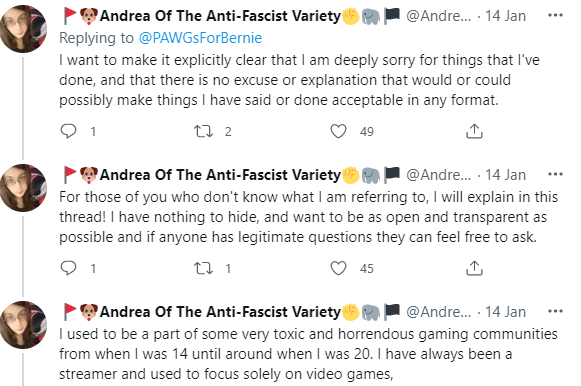 Already, we see can where this is going. I wonder if those people are going to make Rovenski do bad things.

Here we’ve got the appeals for sympathy. “I was so vulnerable!” 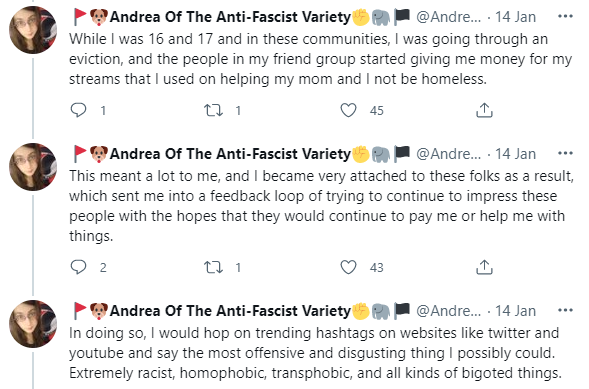 I’ve heard of “gay for pay,” but “fash for cash”? This is what she is running with? “I had to be racist, or else my mother and I would be homeless and starving.”

For the sake of argument, let’s say this is true. Okay, then don’t you think you should show a little more fuckin’ gratitude towards us racists? After all, it was us racists that were the only people keeping you and your mother from eating out of trash cans on the streets. Where were your Antifa buddies when you were facing starvation? Why didn’t any of your POC pals pass around a hat for you and your mom? No, there was only one group of people who were there for you in your darkest hour, and this is how you thank us?

Anyway, I’d like to meet some of Rovenski’s old friends. If they want to pay me to say racist things, I will charge them half of what Rovenski was. 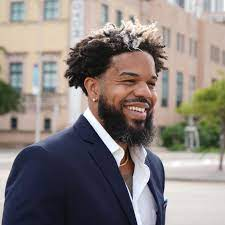 Around this time, Rovenski was feuding with this black guy named Niko House, who is one of 7 black socialists in the world. He’s a big-time Lefty organizer and has worked on a bunch of different campaigns (Bernie, Tulsi Gabbard, Jill Stein). Apparently, he was a major figure in bringing a lot of Rovenski’s racist past to the forefront.

Rovenski tries to deflect accusations of Nazism by claiming Niko House, a black guy, is an even bigger Nazi.

That’s not what “conspiracy theory” means, but okay. . . 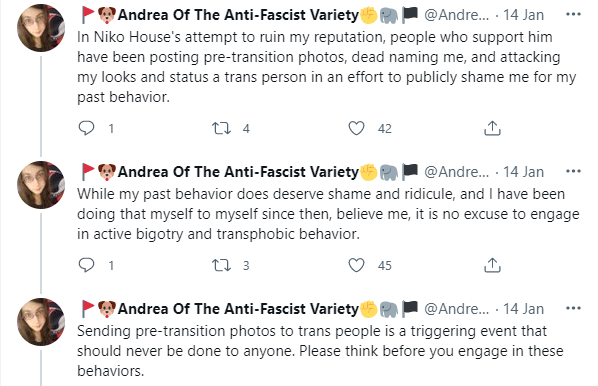 I’ll get to that last bit later.

This controversy from January eventually blew over. Most of the world was still digesting that January 6 Capitol storming, Stop the Steal was still going on, and most people had other things to worry about.

But after the Matt Heimbach/M4M4A affair (which, again, was orchestrated by either Antifa or Zionists), the Left is now in a state of absolute paranoia over Nazi infiltration within their ranks. All of this old stuff has consequently been dragged back into the light. 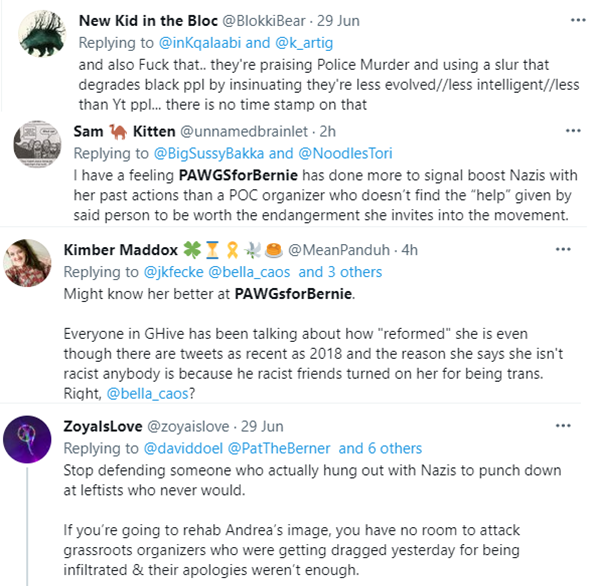 One consistent criticism I’ve been hearing is that Rovenski was quite aggressive about accusing other Leftists of being crypto-Nazis, or that Rovenski played fast and loose with the red-brown accusations. At best, that shows a lack of compassion and humility, and at worst, outright hypocrisy. 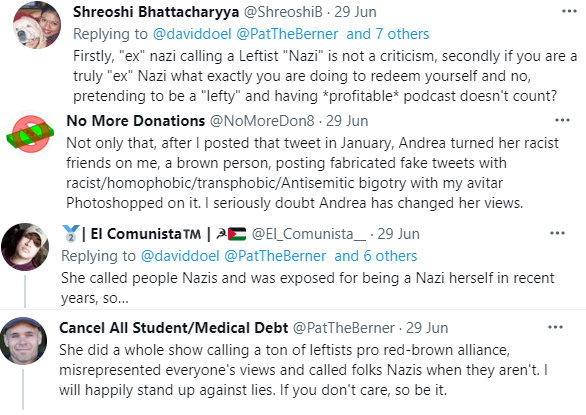 Throughout the controversy, Rovenski has been using their status as transgendered to dodge any accountability. One piece of evidence that was dug up was a picture of Rovenski doing the ironic OK “white power” sign. 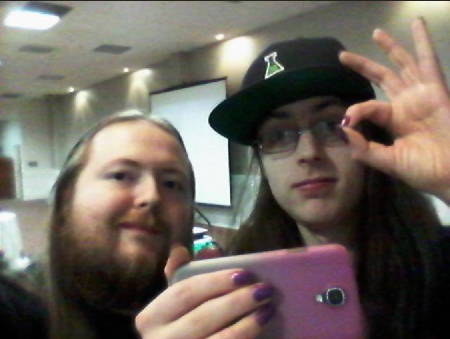 Rovenski first tried to claim the picture on the left was taken before Trump, when the OK sign wasn’t considered racist yet.

Then someone dug up evidence that the picture was actually from March 2017. 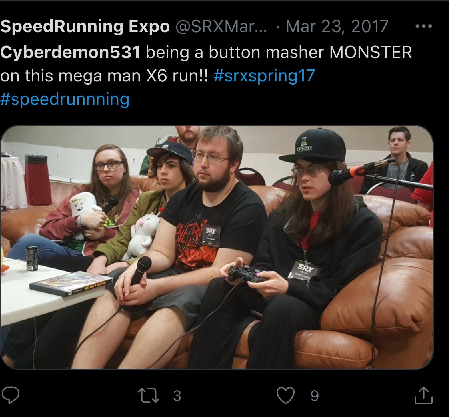 Rovenski doubles down and claims the OK sign was not a racist symbol until Charlottesville. 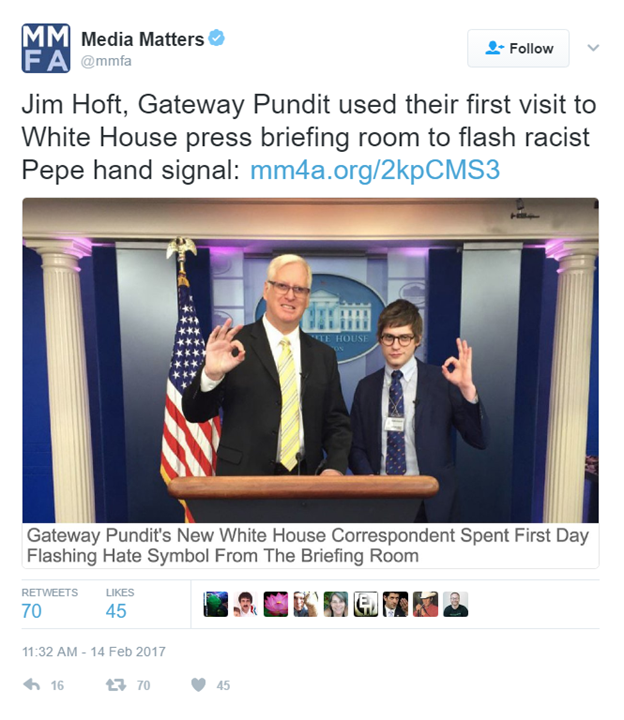 And when that did work, Rovenski began claiming that it was transphobic to even show the picture at all. 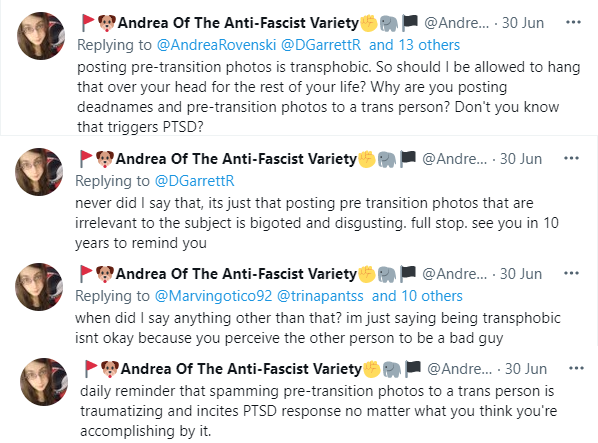 You can drive yourself crazy trying to “checkmate” a sociopath. You might fantasize about getting them cornered, where they have no choice but to say “Okay, fine! I admit it!” but that moment never comes. Never. It doesn’t matter how much evidence you put in front of them. They will keep lying and lying until eventually, they are just insulting your intelligence and then they’ll keep lying some more. 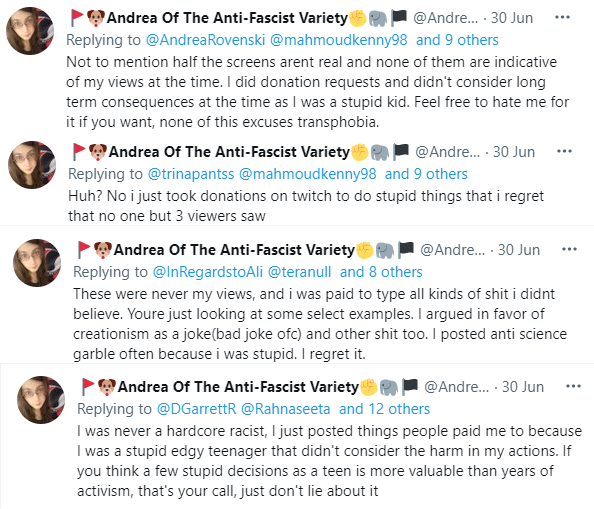 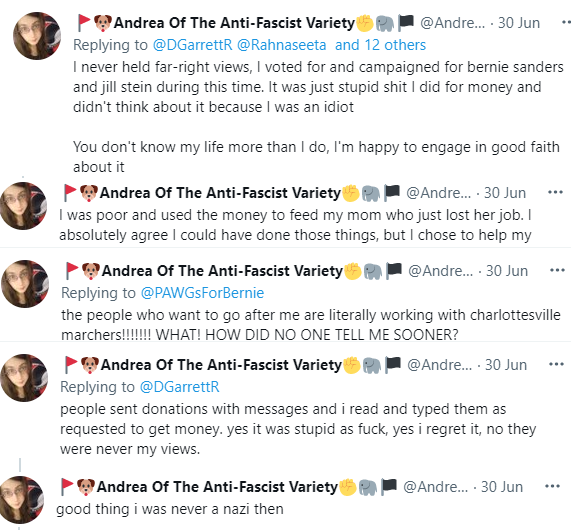 Watching a sociopath at work is truly thunderstriking. They will lie about what is right in front of you.

Lefties also gave Rovenski grief for the handle @PAWGsForBernie which they said was racist. For those who don’t know, PAWG = Phat-Ass White Girl. Lefties were saying it was racist because it asserts whiteness. Others say it is a term for a white woman built like a black woman and therefore fetishizes black sexuality. Or something like that. 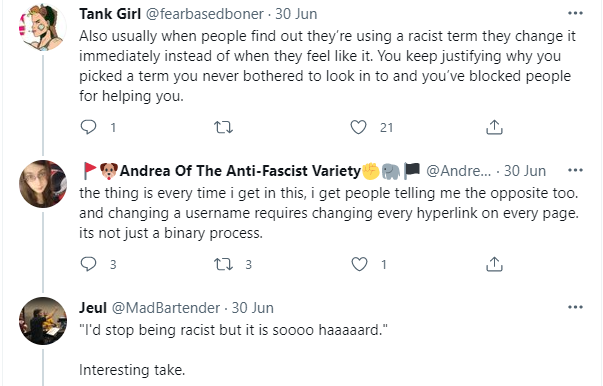 Rovenski wasn’t the only one that has been canceled.

This is David Doel: 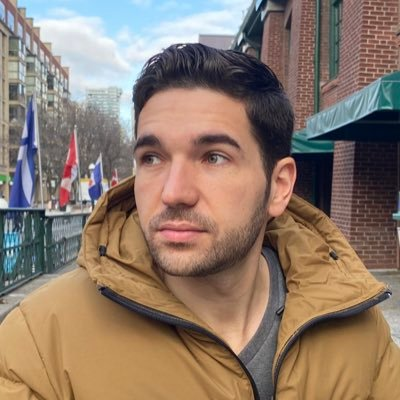 I had never heard of this guy, but he has a prominent 400,000-plus subscriber YouTube channel called The Rational National. It looks like our pal Dave has been canceled just for defending Rovenski.

How about that ratio?

As you can imagine, it didn’t go over well. 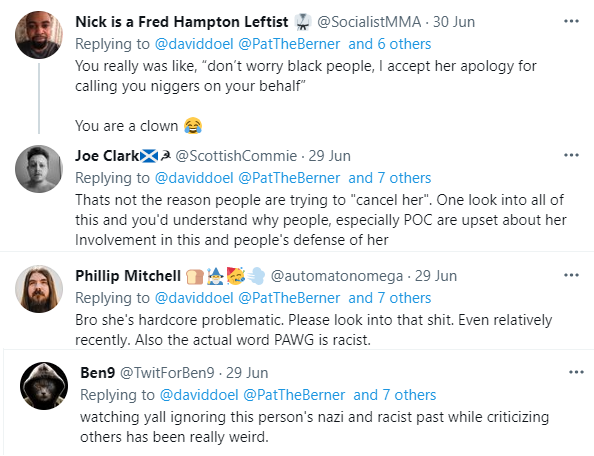 So Dave Doel jumped in on PAWGsForBernie’s behalf, and then two days later, this happens:

Let me restate. All this controversy is over things that the Lefty scene has known about for months, and it has all come back to the surface in the wake of this most recent M4M4A/Matt Heimbach controversy. They were willing to tolerate a Nazi in their midst a week ago, but then Heimbach rears his fat head around again, and now Rovenski must go.

Whoever pulled off this Heimbach prank is getting a lot of bang for their buck. The entire Left has been plunged into a clusterfuck of infighting, purity spiraling, and paranoia. Somewhere, there is a hunched-over man rubbing his hands together.

All I can say is that the prospects of a red-brown alliance aren’t looking too good right now. 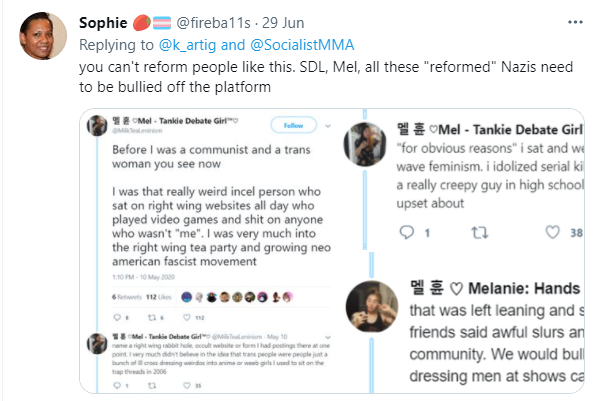 « Do Ashkenazi Jews Have the World’s Highest IQ?