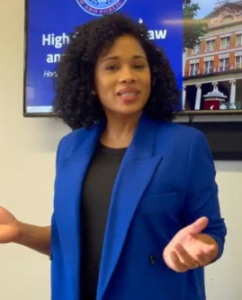 On July 10, 2020, the New York Post published an article about a high school principal, already notorious for frequent expressions of disdain for people of the white persuasion, “who conspired to oust Caucasian teachers.” By itself, this piece lacked the “man bites dog” quality that makes for a good newspaper story. After all, the mistreatment of high albedo employees by well-placed avatars of the Global South is a common occurrence these days. What caught my eye in this little saga about life in the Republic of Rainbow, however, was the surname of the mulâtresse in question, Paula Lev.

Principal Lev, it seems, is wed to Benjamin Lev, who, if I am not too badly mistaken, eats Chinese food at Christmastime. She thus qualifies for membership in an exclusive club that includes the spouse of the pseudo-Goombah mayor of New York City and the wife of the Second Gentleman. (By the way, could it be entirely accidental that the aggrieved party in this case is a teacher, who, in addition to resembling a refugee from an old Brooks Brothers catalog, bears the tragically traif-adjacent name of Nick Bacon?)

It doesn’t take a Spinoza to figure out why a sista might want to put a little Kashrut cream in her coffee. After all, a man who buys jewelry for his wife usually makes a better partner than a man who buys (or steals) it for himself. The motivation for the men in question, however, is not so easy to discern. To begin with, the children delivered of a Shvartze shiksa, like all other fruit of gentile wombs, are necessarily born beyond the boundaries of the Tribe.

The path to one solution to this conundrum begins in Riga, where people still tell an old joke about the three main contributors to the success of the Bolshevik Revolution: German gold, Jewish brains, and Latvian bayonets. This bit of historical humor takes us to Two Hundred Years Together, in which Alexander Solzhenitsyn reminds us that, while the Communists who ravaged Russia were disproportionately Jewish, they were not exclusively so. Rather, the ranks of the Bolshevik movement were filled with marginal people of all sorts. Some of these, like Lenin himself, owed their existence to mixed marriages. Others, like the aforementioned Latvian riflemen, possessed unambiguous national identities. The common characteristic shared by so many Bolsheviks may well have been less a matter of membership in a particular minority than of alienation from the people they sought to rule.

While reasoning by analogy proves nothing (pace Ibn Khaldûn), it sometimes provides us with food for thought. In this instance, the example of the Bolsheviks suggests the possibility that the great engine of the present-day Left is less a matter of love for either yiddishkeit or negritude, than of hatred for white people, the culture that sustains them, and the civilization that they built.

The attraction of Solomon to Sheba may also be a function of the advantages enjoyed by black people in the United States where entrée into elite institutions is concerned. In an age in which Jews face fierce competition from East Asians for places at prestigious colleges, the ability to check “African-American” on an admission form can mean the difference between a scholarship to Yale and paying full-freight at NYU. Later in life, the ability to tap into black privilege increases the chances that, rather than toiling as a doctor, lawyer, or accountant, the result of a retail Rainbow coalition will be able to live the sweet life of a diversity consultant.

In short, Jewish men of 21st-century America marry black women for much the same reason that their ancestors sought to marry their daughters to impecunious European aristocrats.