Masterpieces of Aryan Thought 1
Wyndham Lewis’ Paleface: The Philosophy of the Melting-Pot 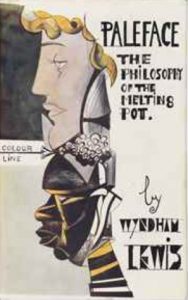 This rather obscure 1929 book by the fascist sympathizer and Modernist novelist and painter, Wyndham Lewis (1882-1957), is one of the most prescient volumes dealing with the efforts to dislodge the white race from its dominance in Europe and North America. Lewis not only anticipated much of today’s race realist thinking, he also foreshadowed Moldbug and the neo-reactionaries by outlining the origin of white racial suicide and guilt in the decadent remnants of Puritanism. The most fascinating aspect of the book is, however, Lewis’ description of how Jewish publishers (most notably Alfred A. Knopf) deliberately published popular novels in which negro protagonists were uniformly good and their white antagonists were uniformly bad:

My position is that I am ready and most anxious to assist all those who suffer from paleness of complexion and all those under a cloud because their grandfathers exterminated the Redskins, or bought and sold cargoes of Blacks. My sense of what is just suffers when I observe some poor honest little palefaced three-pound-a-week clerk or mechanic being bullied by the literary Borzoi big-guns of Mr. Knopf, and told to go and kiss the toe of the nearest Negress, and ask her humbly (as befits the pallid and unpigmented) to be his bride. I am also convulsed with a little laughter at the solemnity with which so often these discussions are pursued . . .

With titles such as The Autobiography of an Ex-Colored Man, The Fire in the Flint, The Wooings of Jezebel Pettyfer, The Weary Blues, Fine Clothes for the Jew, Negro Drawings, Fo’melsaday, Lily, Lady Luck, The Wildcat, The American Negro, Quicksand, and The Sailor’s Return, the Knopf catalog provided plenty of propaganda in the war against the white race of the 1920s. But Knopf was not the only purveyor of anti-white porn at the time. Lewis goes into great detail about W. E. B. Dubois’ novel Dark Princess (published by Harcourt Brace), in which the protagonist, a negro medical student, is unable to complete his medical education. He goes to Berlin, where he falls in with a group of African and Asian revolutionaries who are plotting the destruction of the white race. Needless to say, the dashing negro ex-medical student returns to America, where he becomes a Pullman porter, almost gets lynched by the Ku Klux Klan, and ends up in prison, but everything works out in the end.

Lewis points out that the purpose of novels such as Dark Princess is not to promote literature, but to bring about revolution:

Have you read Uncle Tom’s Cabin? It was a book that was reputed to have put the spark to the gunpowder and to have precipitated the American Civil War. If you are disposed to dismiss the sort of Film-farrago I have been quoting, you must at the same time recall that Mrs. Beecher Stowe was as a novelist no better than Du Bois. I do not indeed mean that any single book today could have the same effect that Uncle Tom’s Cabin had in a simpler time, with fewer books. But hundreds of such books as Dark Princess, accompanied by Films and plays, might reasonably be expected to have some such effect — a particular consciousness being evolved by this mass of books and plays, that is the point.

That the Whites, on their side, are being given a certain consciousness — this dual process is what I have been discussing: for the Coloured Peoples are urged to develop a consciousness of superiority, and the same book seeks to force upon the Paleface a corresponding sense of inferiority.

Take the above passages, replace the names Knopf and Dubois with Weinstein and Tarantino, and the result is that they could have been written in the current year rather than 1929. Lewis goes on to demonstrate the anti-white bias of German and French popular novels of the same time period.

Lewis’ critique of H. L. Mencken is unique and may prove unsettling to some on the Right who view the writer’s unabashed Nietzscheanism as proof that he is “one of us.” Lewis argues that Mencken’s disdain for poor Southern whites and small-town Midwesterners was meant to reinforce the anti-white animus of the Jewish elite and contributed to a loss of self-confidence among whites. The overall effect of Mencken’s journalism was, in Lewis’ opinion, an attempt to prove that whites had no unique culture and that white culture was, in fact, merely the negation of a culture, visible only by its absence. For Lewis, Mencken is a Theodor Adorno with a sense of humor and a readable prose style.

At the end of the book, Lewis states that the only “melting-pot” that can be efficacious is pan-European in nature, and that the ethnic line should be relaxed while the color line is observed. Lewis chastises those Europeans of mixed ethnic ancestry who refer to themselves as “mongrels.” Although he does not explicitly state the obvious, Lewis would no doubt agree that white “culture” is Western civilization, a civilization that appears to have been as much under attack in 1929 as it is in the current year.

Paleface: The Philosophy of the “Melting-Pot” is not currently in print, and hardbound copies are expensive when they are available. Fortunately, the book is available for free download at the Internet Archive.