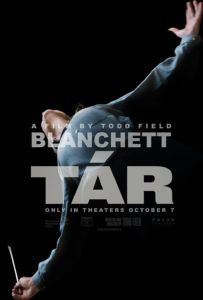 Todd Field’s Tár is the story of the rise — or perhaps I should say “social climb” — and fall of Lydia Tár, a pioneering ethnomusicologist, conductor, and the first female Music Director of the Berlin Philharmonic, who is brilliantly played by Cate Blanchett. Shot on location in New York and Berlin, Tár very effectively conjures up the world of contemporary classical music, from the concert halls and conservatories to the journalistic latrine flies.

In fact, from the very start Tár created such a feeling of verisimilitude that I found myself wondering if Lydia Tár is actually a real person. I know the world of classical music quite well, but the cultural establishment fabricates historic “first” female such-and-suches faster than I can keep up with them. So there was a moment of real doubt.

I think this impression was reinforced by the probably intentional resemblance of the name Lydia Tár to Lívia Rév, a Hungarian classical pianist. Rév was not particularly well-known, but the fact that she lived 101 years and made a number of recordings which remain in print means that her name has at least seeped into the subconscious of most classical music fans. (Tár is actually a Hungarian word. As a noun it means “repository,” e.g., könyvtár means “library” and ruhatár means “cloakroom.” As a verb, it means “to reveal.” The name is apt, for it turns out that Lydia Tár is full of secrets, which are revealed in the course of the movie.)

Another character, Eliot Kaplan, is a New York money man and amateur conductor who pays orchestras to allow him to conduct Mahler. He is obviously based on Gilbert Kaplan, a New York money man, Mahler enthusiast, and amateur conductor who used his wealth to record Mahler’s second symphony twice and perform it more than 100 times around the world. Probably the only thing that saved Field from a lawsuit is the fact that Gilbert Kaplan died in 2016.

The movie opens with Lydia Tár at the top of her game being interviewed by Adam Gopnick at The New Yorker Festival. The scene is mesmerizing. Tár certainly knows her audience, reminiscing about her mentor Leonard Bernstein, peppering her sentences with Hebrew, and talking about completing her Mahler symphony cycle. But there’s something contrarian and subversive about her from the start. Even as she praises Bernstein, she rejects his rampant subjectivism and claims that the purpose of a conductor is to keep time and perform the score as written and in conformity with the composer’s intentions. She also says that she hasn’t really experienced any “gender” discrimination in the world of classical music. (She puts verbal scare quotes around “gender.”)

The next scene, a lunch with Eliot Kaplan, is similarly languid and immersive, cluttered with shop talk but also filled with important exposition. For example, we first learn that Tár is a lesbian with a daughter. (She’s married to the Concertmaster of the Berlin Philharmonic and has adopted an off-white child.) But another subversive point is just tossed in: Tár doesn’t think the world needs yet another foundation for promoting women in classical music.

Director Todd Field certainly knows how to let a scene breathe. These are just a few of the sequences where the feeling of cinematic artifice simply melts away and one wonders “Is this real?” Unfortunately, one way that Field achieves this effect is allowing scenes to run on a bit long. After a few minutes, I found myself squirming, not of boredom but because I absolutely hated these people.

But I was hooked by the next scene: Tár’s masterclass at Julliard. She criticizes atonal modern music, and when a “BIPOC” “pangender person” named Max dismisses Bach because he was straight, white, and male, Tár gently but firmly tries to break him out of this mental prison. She’s really quite eloquent. Tár herself is a “U-Haul lesbian,” but she does not allow radical “gender” politics to poison her with resentment to the point that she can’t love Bach’s music. When she asks Max if all he wants to be remembered for is being BIPOC and pangender, he calls her a bitch and storms out. I wish more academics had the courage to defend the canon from this sort of mush.

I don’t want to spoil the plot, so I will say little more about the story than can be gathered from the promotional materials. Lydia Tár is accused of sexual harassment of younger female conductors and musicians. Tár isn’t without fault. For instance, she clearly plays favorites with a young Russian cellist with whom she becomes infatuated. But it becomes obvious that Tár’s accusers are ruthless, social-climbing sociopaths who have been stalking and gaslighting her. (Eliot Kaplan, her personal assistant Francesca, and Krista Taylor, a former conducting fellow who had some sort of affair with Francesca.) Tár could have handled them better, but she is not the villain here.

Tár’s critique of wokeness at Julliard was surreptitiously taped by a stalker and released in misleadingly edited form (something familiar to anyone who has had any interaction with the mainstream media). Tár is dropped by the Berlin Philharmonic, driven to a nervous breakdown, and her career hits bottom. The breakdown verges on parody, and the brutal conclusion is as crushingly unsubtle as a Tales from the Crypt comeuppance. But neither flaw is enough to sink the film. (The ending explains why the movie opens with the endless credits that usually roll at the end. It seemed pretentious and almost put me off the movie before it really started.)

For me, the most fascinating sequence is when Tár returns to New York City to relaunch her career. We discover that she was born Linda Tarr to a lower-middle-class family in one of the outer boroughs. (Her first instrument appears to have been the accordion.) When she returns to her childhood room and begins watching her VHS tapes of Leonard Bernstein’s Young People’s Concerts, Linda Tarr comes into focus, to me, as an overwhelmingly sympathetic character.

Like Tom Ripley in Anthony Minghella’s The Talented Mr. Ripley (which also starred Cate Blanchett), the talented Miss Tarr is an intelligent, lower-middle-class, homosexual outsider with refined tastes who sets out to climb the social ladder. Everybody around her was born with a silver spoon, so she has to work extra hard.

Unlike Ripley, Linda Tarr isn’t an outright con-artist, but like everybody around her, she is calculating and conniving in constructing an image and a career. Thus Linda Tarr from the outer boroughs became Lydia Tár. Good Anglo-Saxon names have no cachet in the world of classical music, but something that smacks of Central Europe by way of Ellis Island is just the ticket.

But Tár has to work even harder, because her tastes, reverence for the canon, and ambitions as an artist are all basically conservative, and she has the courage not to hide them. She’s obviously achingly sincere about the things she holds dear. But in today’s world, sincerity must be accompanied by a bodyguard of irony, name-dropping, and intersectional posturing.

As ruthless as Tár can be, she’s no match for the people who try to bring her down. Unlike Tom Ripley, she doesn’t stoop to murder, but frankly I would have cheered if she had.

When, near the end of the film, Tár begins speaking about the intention of the composer she is about to rehearse, it is probably supposed to be brutally ironic. To me, it was moving. Tár has hit bottom, but her soul and her essential seriousness have remained intact. She will rise again.

In terms of its pacing, meticulousness, handling of interiors, and sheer intelligence — even in its failings — Tár kept bringing to mind Stanley Kubrick’s last film Eyes Wide Shut. Imagine my shock, then, when I learned that director Todd Field played the pianist Nick Nightingale in that very film.

The critical response to Tár has been overwhelmingly positive, but the most perceptive review is Richard Brody’s transparently dishonest hatchet-job in The New Yorker. Brody hates the film for being “regressive,” both ideologically and aesthetically, which to me are just reasons to love it. Brody is especially incensed that the film likens cancel culture to post-war German de-Nazification, which is entirely correct. Today’s “cultural Marxism” is simply de-Nazification applied to all white societies.

Tár is one of the best movies of 2022. I admire it for its intelligence, ambition, meticulous world-creation, superb acting, and dark and astonishingly brave depiction of the wokeness, cancel culture, and all-round viciousness of our cultural elites. Tár has only received limited theatrical release, so see it while you have the chance. If you blink and miss it, you’re in luck, because Tár is already available for streaming on Amazon, and it will be released in January of 2023 on disc.