The Fall of the Neoliberal Order 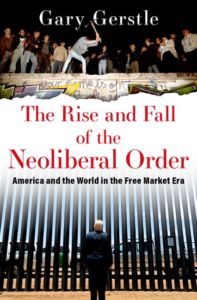 Gary Gerstle
The Rise and Fall of the Neoliberal Order: American and the World in the Free Market Era
New York: Oxford University Press, 2022

Professor Gary Gerstle teaches at Oxford University and has written several excellent books about America and its racial and social problems. One such book is American Crucible: Race and Nation in the Twentieth Century, which was first published in 2001 and was later updated with a few extra chapters describing Black Lives Matter terrorism and some quotes from the cast of non-whites in the Hamilton minstrel show who were mad about Trump being elected.