Thoughts on the Moral Majority 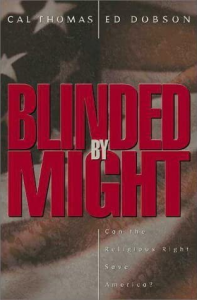 The late Jerry Falwell (1933–2007) [1] was a politically-involved preacher. He was not much different from the abolitionist ministers in New England active a century before his birth. In 1979, Falwell founded an organization called the Moral Majority. It would serve as the “far-right” in the mainstream American political ecosystem until Falwell disbanded it to mostly focus on other matters in 1989. Blinded by Might is a book by Moral Majority founder Jerry Falwell’s two top lieutenants, Cal Thomas and the late Ed Dobson (1949–2015). In this book, the two men take a look at their political work and dissect it for posterity with wise introspection.

The political careers of evangelizing Christian ministers contain many lessons for white nationalists. First, I believe, but of course cannot prove, that the rise of the so-called Religious Right was a warped reaction by whites to the many problems of the racial power grab that was the “civil rights movement.” The evidence for this exists in a circumstantial, between-the-lines sort of way. All Religious Rights advocates specifically disavow “racism” and any opposition to “civil rights.” Second, the structure of the careers of Christian, especially Protestant, ministers matches the structure of the career paths of many prominent White Nationalists.

We’re Not So Different

To enumerate the first point made above: The Religious Right was built upon an Anglo-European ethnic core. Those of other races in the movement were mainly tokens. Many of the Religious Right’s leaders argued during the early 1950s against black preachers doing “civil rights,” but got involved in politics after “civil rights” rioting and other problems. In line with that idea, Cal Thomas criticizes Jessie Jackson, a black minister and black racial advocate, in a number of ways throughout the book. Finally, Religious Rightist ministers argued that the Bible supported Northern European folkways (divorce, monogamous marriage, anti-slavery, etc.), when in fact, the Bible often endorses more Middle Eastern ways. Old Testament kings and prophets, for example, were polygamists, Jesus frowned upon divorce, and slavery is specifically endorsed in both the Old and New Testaments.

To enumerate the second point: The environments in which Protestant ministers and White Nationalists work both have remarkably similar structures. Sexual indiscretions can eat up the careers of both types of activists. Engaging in such reckless action makes an empire a phone call away from collapse. Additionally, those engaged in both types of activism are living in a warlord culture. Each minister must carve out a following, grow the following, and then successfully navigate through the storms that come. There are no guarantees or promotion schedules. It’s a dog eat dog world. Each minister/white advocate has mortal enemies among those who are closest to him ideologically. Christians who leave a church don’t become Satanists, they find a different church saying the same thing but with a better youth group, basketball court, choir, or something.

Often both types of activists’ views change over time as they grow in wisdom and maturity, but the various activists are trapped by earlier public statements. Apostasy is an easy out, too. There are a great many sons of ministers that make a living out of disavowing the work of their fathers, and white advocates do get a second shot at publicity when they “convert over” to desegregationalism or whatever. The examples of Derek Black and Matthew Heimbach are not unprecedented.

The Moral Majority was founded, organized, and led by Christian Fundamentalists. Fundamentalism was a reaction to the ever-increasing influence of science and humanist philosophy within Christianity. [2] The Fundamentalist Movement came to the fore in 1909 with a series of booklets with different authors called The Fundamentals: A Testimony of Truth. Most of the ideas are a reaffirmation of the traditionalist view of Christianity (i.e. the Virgin Birth and Resurrection of Jesus). The new concept introduced was the inerrancy of the Bible. In other words, according to the Fundamentalists, statements in the Bible that might be taken figuratively should be taken as literal truth. Fundamentalism is different from, but still has a great deal of overlap with, the more upscale Evangelical Protestant movement and the more emotionalist and downscale Holiness Movement.

The Moral Majority had a set of ten principles:

Both Cal Thomas and Ed Dobson eventually come to realize that while they supported the Republican Party, the Republican Party did very little to support their agenda. When Bill Clinton was elected to office in 1992, he did away with the few Moral Majority victories with the stroke of a pen. Both men eventually came to decide that their brush with temporal power detracted from their work as Christians, and they decided their lives were better focused on metapolitics (they don’t use that word) and Christian living and preaching. Even Jerry Falwell eventually distanced himself a bit from politics and focused on building up Liberty University.

Was the Religious Right Unsuccessful?

In the election of 1980, the Religious Right was able to remove the architects of “civil rights” and mitigate some of the damage. Had Senator Gaylord Nelson continued in office, Milwaukee’s African problem could have also spread to Green Bay. After reading the works of many non-white pro-“civil rights” writers, all say that the white reaction to “civil rights” in the 1970s greatly stifled “civil rights” work. Since the 1960s, a Republican winning the White House can break months of black rioting.

The Religious Right’s focus on domestic morality issues also gave the Reagan administration both a steady base of support and a free hand to deal with the Cold War. This should not be discounted. In examining the causes of the Great War of 1914–1918, many historians point out that politicians in Europe were saddled with a base of support that was something of an insane asylum. The irredentism and dreadnought lobbies infecting European governments narrowed the acceptable range of public policy across the continent. With supporters more concerned about drugs and sexual vices, Reagan had the flexibility to do one thing in Central America and another in Europe. Nobody batted an eye when he sent Stinger missiles to Islamic fanatics in Afghanistan. In 1979, many felt the Soviets were on the cusp of global victory. By 1989, the Evil Empire was a hollow shell. The Communist force that killed 100 million people was vanquished by Reagan, and the Moral Majority had a part in that victory.

To invoke the Apostle Paul, Cal Thomas and Ed Dobson have fought the good fight, run the race, and remained faithful. Although sin still exists, their actions in the Moral Majority were not in vain. It is for us to learn from the Moral Majority and improve upon their work. White advocates need to be involved in politics as best they can, but remember that metapolitics is more important. White advocates should steer clear of the abortion debate. White advocates should embrace the differences in the roles of the two sexes. Furthermore, white advocates need to be good citizens of their own nations while at the same time strengthening the bonds of the wider white world.

We must also remember the chief difference we have from the Religious Right: Christ’s kingdom is not of this world, but we must work in the here and now.