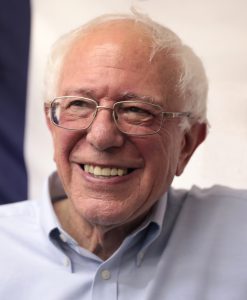 A septuagenarian “socialist” may be the Democratic presidential nominee, and some on the Dissident Right can’t wait to support him.

Vermont Sen. Bernie Sanders is rising in the polls, in spite of the Democratic establishment’s opposition. He narrowly lost to Hillary Clinton in 2016 under similar circumstances.

But 2020 is a very different race from 2016. In 2016, Bernie was up against one candidate with the entire establishment behind her. Now he’s in a crowded field where his message and authenticity stand out. Joe Biden, the establishment favorite, doesn’t have Clinton’s massive support or intimidating warchest. Sanders’s “democratic socialism”–better described as Left-populism–is at the peak of its popularity. He has tens of thousands of diehard supporters who will door knock and make robocalls for him. Nearly every Democratic candidate has taken ideas from Sanders’s agenda.

Many on the Dissident Right who have sworn off Trump seem eager to support Sanders. They see him as the real non-interventionist who will shake up the system and deliver single-payer healthcare. They point to his past support for immigration restriction and criticism of Israel as evidence he’s secretly based. They ignore his Jewish Communist background and his declaration of war against White Nationalism. Some Right-wingers want him to win to accelerate decline, others actually believe he will be better than Trump.

The Bernie temptation is ultimately moronic. He doesn’t want our support, doesn’t need our support, and hates us more than he hates the billionaires. His agenda will hurt white America, persecute identitarians, and suppress free speech. A Sanders win in 2020 will be a defeat for identitarianism and a victory for anti-white grievance politics. It certainly won’t be a triumph for “national bolshevism.” Sanders may tank the economy, but it’s not certain whether it will benefit us. Accelerationism isn’t a strategy to bet on, and wignats’ imaginary populist Left doesn’t exist. Bernie’s base wishes we were dead or in prison camps.

Gulags and the persecution of the kulaks were exaggerated, says another Bernie Sanders staffer in a new undercover video. Mason Baird, they/them, appears to express support for a militant far-left movement that is willing to be violent. pic.twitter.com/RLYIvHocKj

Do these guys look like they want an alliance with the Dissident Right? Bernie is Antifa’s favorite candidate for a reason. If you think that Antifa will somehow become our friend, then maybe supporting Bernie makes sense. You should also get your head checked by a doctor if you think that.

For those who are right in the head, this is an absurd proposal. We need to dispense with fantasies of allying with the far-Left against the establishment and focus on ourselves.

Sanders’s Right-wing sympathizers like to claim he’s actually good on the issues. He focuses on class politics, not identity politics. He supports immigration restriction. He opposes foreign interventions. And he used to argue against gun control.

But this is a false picture. Bernie champions identity politics as much as any other Democratic candidate. One of his chief pitches is the Green New Deal. The GND is supposed to combat climate change, but it’s really just a racial redistribution scheme. Sanders’s website touts the GND as “an opportunity to uproot historical injustices and inequities to advance social, racial, and economic justice, including redressing the exclusion of black, brown, Native American, and other vulnerable communities from the programs that made up the original New Deal.”

His plan would require racial quotas in hiring for “green jobs,” make it easier to claim “environmental racism” in court, and provide even more government handouts to non-white communities.

He strongly supports trans rights and believes the government should recognize a third gender.

Trans rights are human rights. We are going to fight to end all forms of discrimination and violence against our trans family. #TransDayOfRemembrance pic.twitter.com/f63VQw1Bt8

This isn’t the post-identity politics Bernie Bros promised in 2016.

For most of his career, Bernie was sensible on immigration. He railed against corporate America’s desire for cheap labor and stood against guest workers. He voted against the 2007 amnesty (but did vote for the 2013 amnesty). In 2015, he famously called open borders a “Koch brothers” idea.

But that sensible Bernie is long gone. Now he supports open borders and considers immigration restriction racist. His immigration agenda is indistinguishable. He wants to legalize every illegal alien in the U.S. and decriminalize illegal border crossings; he wants to abolish Immigration and Customs Enforcement; he wants more refugees, he wants pared-down border security; and he wants to dramatically reduce deportations. There is nothing praiseworthy in this agenda.

Sanders is the favorite candidate among immigrant demographic groups by a significant margin. Many of his Iowa caucus voters were South Asians who can’t speak English.

Does this look like a voter base that wants anything to do with the Dissident Right?

Voting now. Very difficult given the many languishes in this room and lack of translators. Biden Is on the verge of viability, but might not make it. It’s chaos but it’s beautiful. pic.twitter.com/22Vg7CtQ4J

Turns out everyone here is from Bhutan and speaks Nepali. Just unbelievable organizing in this community. Hats off! pic.twitter.com/yHq4Zf1S54

Similarly, Sanders has ditched his sensibility on gun rights. He once was a moderate who supported the right to bear arms, but he now backs gun control measures that would disarm white America.

The one policy area Sanders shows any sense is foreign policy. He voted against the Iraq war, opposes saber-rattling toward Iran, and wants America to reduce its overseas presence. With Trump’s latest actions, this does seem like a breath of fresh air. However, the Vermont senator’s record is not that impeccable.

He supported bombing Serbia in 1999. In 2011, he co-sponsored a resolution calling for regime change in Libya, which gave then-President Barack Obama moral clout to intervene. Sanders adviser Matt Duss says that a President Sanders would likely intervene in the case of a “humanitarian crisis,” something Trump is less predisposed to do. Much of Sanders’s socialist base want America to stay in Syria to help Left-wing Kurdish fighters build a communist utopia. These voices would be represented in a Sanders administration.

Sanders would also likely apply pressure to nationalist governments in Europe. It’s easy to see him sanctioning Hungary, Poland, and a Matteo Salvini-led Italy if they don’t follow globalist orders.

Trump has disappointed on foreign policy, but Sanders is hardly any better.

Some Right-wingers may realize all of these problems and still want Bernie for the free healthcare and other benefits. That assumes that he will somehow pass single-payer (he won’t) and that these benefits won’t just be a massive racial redistribution scheme (they will). His plan to save the environment focuses more on helping lazy minorities than protecting the forests. The same will likely be the case with his healthcare plan, which likely won’t pass Congress anyway.

Even if you did somehow get single-payer, the Sanders administration would work hard to persecute you for your political beliefs. Think of this: People who share the same opinions as his communist field organizers will now get jobs at Homeland Security and the Department of Justice. These people would love to launch investigations against Right-wing dissidents and send them to jail. Sanders wants tech companies to censor more and his Antifa-sympathizing staffers will make sure Big Tech follows these orders. Out of all the Democratic candidates, Sanders is the most likely to put Antifa and democratic socialists into positions of power.

You may think Trump’s DOJ is bad, but just wait until there is a federal investigation against American Renaissance, VDARE, Counter-Currents, Steve Sailer, and Unz.com. This would be an Antifa fantasy, and Bernie will deliver it.

To summarize, Bernie will redistribute white resources to non-whites, enact open borders, take our guns away, censor our speech, launch military interventions to support Left-wing causes, and prosecute dissidents. He sure will shake up the DC establishment.

Some wignats will counter: “Drumpf already does that!!” Even if that were true (it’s not), the solution is to increase the shit exponentially? That’s not a serious argument.

The only argument left is the accelerationist one. This humble author agrees with Greg Johnson that the worse is often just worse, not better: “In the end, we can only win by winning.” A President Sanders may make more Americans identitarians, it may make more of them accept dispossession. The one thing absolutely clear is that things will be far worse for the Dissident Right, and fewer Americans will be able to hear our message.

The desire to support Sanders comes from frustration with Trump. Many on our own side feel so betrayed by Trump that they want him punished and think anybody will be better. Bernie demonstrates the same insurgent energy of Trump’s 2016 and Right-wingers love a revolt against the corrupt establishment. Butthis energy is coming from our mortal enemies and is not something we should join in.

Many on our side fantasize about an alliance with the far-Left against the center and feel that communists and socialists are our natural allies, not Trump-supporting Boomers. No examples or evidence exist to back up this thesis, but people persist in believing it. Wignats believe that Antifa will take off their masks and embrace them as brothers when they hear about their support for single-payer healthcare.

Anyone who believes that a shared position will lead to an alliance should remember that White Nationalists were kicked out of anti-war protests last month. The far Left doesn’t even want our help to stop war with Iran.

A Sanders-Trump election will certainly be a happening and further polarize the nation. But Sanders is not the one we should support.

« Squarepusher’s Be Up a Hello