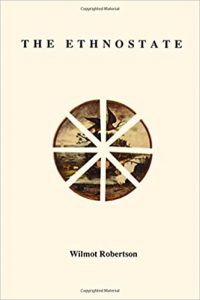 Wilmot Robertson
The Ethnostate: An Unblinkered Prospectus on the Art of Statecraft
Ostara Publications, 2018 (1992)

I’d call Wilmot Robertson’ The Ethnostate the Farmer’s Almanac of the Dissident Right, but that would make it seem too quaint. Really, it is an incisive and spot-on encapsulation of everything that is besieging white civilization in the West collected in a slim volume of sterling aphorisms and impeccable reasoning. That it was published in 1993 but remains animated with relevance and urgency in 2020 takes the book nearly into the realm of prophecy. The twin parameters of white identity and race realism form the foundation of Robertson’s political edifice: the ethnostate, the apotheosis of statecraft and the ideal mode of living for all mankind.

Known mostly as the author of the 1972 classic The Dispossessed Majority and as the publisher of the racialist magazine Instauration, which ran from 1975 until 2001, Wilmot Robertson (born John Humphrey Ireland in 1915) kept alive the social Darwinism and Euro-tribalism championed by Madison Grant and Lothrop Stoddard over a century ago. Along with Sam Francis, J. Phillipe Rushton, and others, Robertson can be seen in a historical sense as part of the overtly pro-white or race realist wing of the paleoconservative movement of the 1970s, 80s, and 90s. Yet The Ethnostate has universalist appeal in that Robertson argues that the ethnostate would be best for everyone.

The principles behind The Ethnostate are as clear, simple, and true as they are hard to swallow for mainstream whites who’ve been steeped in racial egalitarianism and white guilt their entire lives: Since racial differences are based in genetics, and are therefore real and measurable, it makes sense that our political organizations reflect this. “Bioregionalism” is a term Robertson has for it, with an emphasis on “regionalism” since he insists that ethnostates be small as well as consisting mostly of one race.

Prominent among Robertson’s ideas is “devolution.” Inspired perhaps by the contemporaneous break-up of the Soviet Union, Robertson calls for nations and empires to “devolve” into smaller, more easily manageable ethnostates. He offers an ecological argument for this, since “a monoracial humanity would be extremely vulnerable to any outbreak of a serious infectious disease.” He also promotes the idea that such a devolved political state would increase diversity worldwide by allowing each race and sub-race to shine in its own homeland. Mostly, however, it’s about survival, especially for whites. After admitting that forming a white ethnostate out of “the dying husk of America” could present terrible difficulties, Robertson takes a step back and shows us the bigger picture.

The author concedes all these objections have some validity, but wishes to point out that the ideas being floated here are not concerned with the present but with the future, not with conditions as they exist today or tomorrow, but with those that will exist the day after tomorrow, when Americans — and perhaps Europeans — will have reached the point where they will have to choose between ethnostates or no states at all.

Robertson’s approach for most of this work amounts to pointing out clear defects in the current multiracial system, plotting how such defects could lead to disaster in the future, and then demonstrating how in a world of ethnostates such defects would be significantly curtailed. By beginning most of his reasoning with negatives and spicing his observations with a great deal of pessimism, Robertson threatens often to come across as a crank. But this is a superficial reading — in every instance, he endeavors to show a way out of our difficulties. Clearly, he seeks to make headway with metapolitics rather than politics. He calls for a “revolutionary shift in popular attitudes,” and blesses us with the optimistic mantra of “Educate, arouse, act!” He also reminds us that there are more whites alive today than during our heyday a century ago, which is more than enough reason for a racial resurgence once this shift in popular attitudes occurs. Further, The Ethnostate is so rife with clever or witty prose that one can nearly use it to fill up a calendar’s worth of maxims for the Dissident Right.

My favorite urges for a return to the geocentric view of the universe, at least from a philosophical standpoint:

In all the innumerable galaxies out there, none may have any life form as advanced as Homo sapiens. Because they are that division of Homo sapiens most capable of carrying on the Faustian adventure, whites are precious commodities.

A common theme throughout The Ethnostate is that statecraft should not only be based on race realism, but also shepherd humanity through eugenic changes. As Robertson repeatedly points out, it’s either that or what we’re getting today, which is clearly dysgenic:

Owing to modern medicine, welfare and differential birthrates, the less intelligent are now surviving in greater numbers than the more intelligent. If we ever reach the point where we can experiment with eugenics to compensate for the decline of natural selection as a means of weeding out the unfit, ethnostates would be ideal laboratories.

The advantages of an ethnostate burst from nearly every page. In an ethnostate, there would be a single elite representing the people, a dearth of racial infighting, sacrosanct majority rights, an empathetic media, strong borders, high culture, a coherent understanding of national history, little crime, greater self- and group-respect, and other equally beneficial outcomes. Robertson makes his case not only with rock-solid logic and some fascinating turns at brainstorming, but also by — in proper Farmer’s Almanac fashion — predicting the future. He does this too often to be a fluke.

The campaign for equality is such a popular political ploy that politicians are reluctant to give it up even when equality has become the law of the land. Minority spokesmen find it politically inexpedient to acknowledge that the fight has been won, but go on as before—until they reach the point where they have “out-equaled” majority members. Sooner or later the “outs” turn the tables on the “ins” and rely on their own brand of racism to guard and expand their new ascendancy.

Given how this perfectly describes how non-white identity politics is playing out today, it’s amazing to think that this quote is nearly thirty years old.

When not leading us by wit and reason to the hallowed grounds of ethnostate, Robertson also sows a great deal of skepticism for the several cultural elements which would impede conservatives along this path. He dedicates an entire chapter to dismantling the myth of free-market capitalism, complete with a takedown of Milton Friedman. In it, he presages Donald Trump’s America-First trade policy as well as his successful use of tariffs. People thrown out of work in a country adhering to free trade, he tells us, “are not casualties of trade war; they are casualties of trade peace.”

In another chapter, he gives the skeptic’s treatment of Christianity, noting that “Christianity can easily become an altruistic Trojan Horse.”

It [Christianity] invites outsiders, no matter what their physical and mental qualifications, to migrate in waves to countries where, with a judicious amount of racial and minority networking, they are able to accumulate sufficient wealth and political power to subvert the social order established by the host population.

We should keep in mind that The Ethnostate is neither anti-capitalist nor anti-Christian. Within Robertson’s fairly lose parameters, it is possible that an ethnostate could be both. He simply points out that these and other religious or ideological concerns must take a backseat to the racial safekeeping and nurturing that is an ethnostate’s primary duty. Since, in nature, entire species can go extinct, so can an entire civilization or a race. By placing such a primordial concept in the forefront of his reasoning, Robertson can be viewed as the precursor to today’s leading lights in the Dissident Right. Indeed, elements of Greg Johnson’s The White Nationalist Manifesto, Jared Taylor’s White Identity, Kevin MacDonald’s Culture of Critique, and other major works can be found in The Ethnostate. Further, some more mainstream academics have recently published works that, perhaps inadvertently, concede that many of Robertson’s ideas have proven to be correct and his concerns justified. Two which come to mind are Roger Eatwell and Matthew Goodwin’s National Populism: The Revolt Against Liberal Democracy and Christopher Caldwell’s The Age of Entitlement: America Since the Sixties.

Wilmot Robertson, as is usual, says it best:

There is scant room for 19th-century Western moral standards in the beleaguered late 20th-century West. To survive we must return to the basic and much older values of survival, which predominated in the beginnings of Western civilization. The time has come to break out of the liberal mindset, which triggered so many of the West’s cultural marvels, but which is now hopelessly out of date and busy destroying what it so brilliantly created. In all too many ways the modern Westerner is being programmed to deal with a world that no longer exists.

If Wilmot Robertson tells us anything, it’s that a world for whites as a distinct race will one day no longer exist unless we adopt the ideas he lays out for us in The Ethnostate.