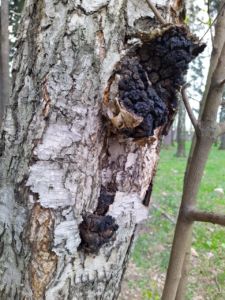 I will explain the essence of my ideology. You need to imagine a society in the form of a forest, where trees are social structures. There is a social consensus about friendship or bribery — that it is bad to give bribes. But in fact this consensus is rotten, because bribes are given and taken by everyone, if possible. The installation is rotten to the core.

In every forest there are mulberry mushrooms — they are also called chaga. Every tree contains spores of this fungus. Weak trees begin to die, mushrooms finish them off faster so that the forest can renew itself. We have the same situation in society.

These mushrooms were cut from rotten Russian trees. But this did not make the trees healthy, it only opened the way for a new generation of mulberry parasites, only now perverted and dangerous, because if there is rot, then there will be a parasite.

God save us all when this rotten forest will crumble.

In my previous writings for Counter-Currents I’ve observed and pointed out that one role of the Right-wing dissident is that of a wrecker and dissolver. We are creatures of a late-stage civilization where there’s nothing left to conserve, so we must endeavor to abandon the instinct to conserve and embrace our thanatic impulses, our impulses towards destruction, for the simple reason that very little of that which surrounds us is worth conserving and almost everything is tainted by evil. I have poetically called my own urges for destruction The Shades of Wrath, and I feel them with me at all times, kept at bay by mental discipline and self-control but always tempting me with the unfathomable freedom that their release would represent. Sometimes I indulge them, in the ring or at the shooting range; at other times I direct their energy into my work.

We are born into a world which is filled with evil, and this evil has not left us untainted. This evil world appropriates our creative impulse in order to perpetuate itself, and our instincts for creation and regeneration are subverted and exploited, like how the virus uses a cell, to perpetuate the evil around us. When the artist is tempted by the cultural establishment to bend the knee so that he can make a living from his art, he is tempted by Satan and offered all the riches of this world so that he may contribute to the evil. An artist can therefore strike a blow for good by denying evil the use of his talents. The same can be said of the engineer, the scientist, the warrior, the thinker and any man of worth. But even if we resist, we are still surrounded by the structures of evil. This means that the proper tools of the artist in this age aren’t the brush, the chisel, the pen, or the musical instrument, but the sledgehammer and kerosene can. We are the generation born to destroy the evil around us.

As I write these words, a war rages in Ukraine and my body is tense with a mixture of anticipation and dread. The Shades of Wrath are stirring; they can smell the blood and gunpowder in the air. They whisper in my ear, “You’re a fighting-age male, and you know which end of a gun to point at the enemy. Why not volunteer to fight? You’re already 30. You want to hit 40 and never know what it’s like to kill a man? You think there’s gonna be another good war anytime soon?” I chase those urges away, as it’s all the childish fantasies of a man who has never seen an actual warzone. In modern war, as Hemingway put it, you die like a dog for no good reason. Industrial warfare is decidedly unglamorous. Worse than being blown to smithereens in a rocket barrage, they’ll probably just have me stacking boxes in the rear for the duration of the conflict.

But the unfathomably old bloodlust is still there. Thanatos will have his due. It’s hard to breathe, swallow, and think; I am boiling over with an urge to destroy. I created this monster within myself when I set out to become a wrecker.

We are the wreckers, the dissolvers. We have cultivated ourselves as chaga, as the mushroom which devours the tree’s rotten heart when the tree no longer serves its purpose in the forest. We do this in service to the forest, because the old, rotten trees have to fall if new, healthy ones are to grow. We do this by deconstructing the means by which our enemy operates: the narrative. We are destroying his ability to deceive and lead people around by the nose. By deconstructing his narrative, we’re also damaging his ability to coordinate his vast, decentralized network of managerial drones.

But we are not mushrooms. We are still men, and men cannot be wreckers alone. We know how to wreck the enemy, but what happens after? More importantly, can we conceive of an “after” from here, deep in our bleak, fungal struggle?

What does it matter to the wrecker what happens afterwards? When the demolition crew is done with a decrepit building, do they inquire as to the fate of the lot, or do they move on to a fresh building to demolish? The chaga may live in every tree, but it is only activated in those that are old and rotten. It would be very simple, but we are men and not mushrooms, and we’re not even the demolition crew, since we’ll still have to live in this place when the painful job of wrecking it is done.

Since we are men and not mushrooms, we must learn to create as we destroy. When we work our destruction, we must do so in such a way the creation of the new is incipient in it. Our acts of dissolution must also be acts of constitution. We are not mushroom men and we are not Alex Jones. We do not believe in epistemic nihilism. When we destroy lies, we replace them with the truth.

I’ve written before about the will to self-destruction which often lurks behind dissident politics. I’ve also discussed the problem of pathological approaches to dissident politics with Josh Neal, whose book American Extremist I recommend to everyone interested in these matters. The unleashed death instinct, the Shades of Wrath, are, as my fathers used to say, good servants but cruel masters. When man sets out to destroy, he must take care that his urge to destroy does not consume him utterly and transform him into something monstrous. Old man Nietzsche’s warning about fighting monsters and gazing into the abyss is applicable here.

For this reason, it is not enough merely to have a negative vision. The purely negative vision seeps into the deep psyche, which is the master of the rational mind and instrumentalizes it to work its nefarious work. In a sense one becomes possessed by the negative vision, as our ancestors imagined men were possessed by demons. Because the rational mind is the plaything of the irrational, deep instincts, they must be ennobled by a yearning for the good, a positive vision of the future, a light at the end of the tunnel, a blessed place where the struggle is at long last over and the body can relax, its urge to destruction finally fulfilled, the knife and gun finally laid to rest. It’s not just a conceptual idea of “an end to the war,” but a concrete place populated by concrete people. When we fight for our homelands, we have a positive vision of what they’ll look like once the war is over. This is how we keep ourselves safe from thanatic possession.

This may sound very abstract and theoretical, but we have already seen people give in to nihilism as a sin of excess corresponding to the healthy and righteous struggle to destroy society’s rotting institutions. We have seen Richard Spencer do it to himself, we have seen Hungary’s Jobbik fall from grace, and we are observing Nick Fuentes in this process of self-abasement even as I write these words. But those are stories for another day.

I will leave you with this thought: A man may fight against something, and there may be a lot of fight in him, but without a vision of something good to fight for, “the good” towards which virtue ethicists say man should orient himself, his soul may be devoured by the demon of dissolution.

» Jonathan Bowden on the Merging of the Left & Right