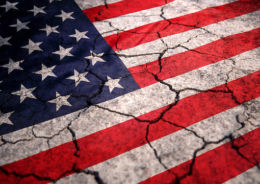 White Nationalists should give up any idea of finding immediate results for their ambitions in the current political climate. At this moment, the enemy is simply too powerful, too resourceful, too wealthy, and too pervasive to take on. The best we can do is work to keep what few institutions we still have alive through dedicated financial or volunteer support.

This will help develop a resilient counter-culture which will be present when history does finally catch up with white people. Most whites on the popular Right do not fear non-white immigration — or non-white rule — as much as they should. To do so would violate Leftist taboos whose tentacles sadly still reach across nearly all of today’s Overton window, despite how hostile the non-white political class has become. As a result, white majorities are slipping everywhere.

Soon, however — as in the next ten to twenty years — a critical mass of whites will wake up to their demographic demise, and we will be there waiting for them. The truth in our ideas and positions will emerge as whites collectively begin to the feel the pain brought on by those interlopers who ultimately wish to tyrannize us. Furthermore, it is only natural that people establish and nurture bonds with others who are similar to them, both biologically and culturally — especially in times of crisis.

At that point, with enough people behind us, the Right can act. Until then, however, any act of rebellion — that is, anything involving violence or terror — will be self-defeating. Even mass protests are risky and potentially damaging, as demonstrated by the Charlottesville Unite the Right rally in 2017. I hate to have to say this, but until we have the numbers and resources to resist the Left, the Right must behave like model citizens while preparing for a viable future. For race-conscious whites, this means having as many children as possible, making as much money as possible, developing useful skills, and replacing addictive and destructive habits with healthy, productive ones. I offer further suggestions on this in my “Advice for Young White People” series here, here, and here. Basically, we need to collectivize our minds and place duty over freedom while we prepare for a grim but potentially redemptive future.

But what else do we do in the meantime? Aside from the hurry-up-and-wait approach outlined above, there are three additional possible courses of action, all of which can be pursued concurrently.

The first, as a corollary to the above, is to support serious anti-Leftist or anti-progressive organizations that operate in the mainstream — even if they are not explicitly Right wing themselves. Donald Trump is a great example. Yes, he’s flawed and fickle, but if by some miracle he re-enters the White House in 2024, that would be a good thing (or a less bad thing) for the Right. Further, there quite are a few America First-type politicians and prospective politicians still riding on Trump’s coattails who may be serious enough to deserve our support. Project Veritas and the Center for Immigration Studies are two examples of people who distance themselves from White Nationalism and yet still operate more or less in harmony with our interests. The former is suing the New York Times, and the latter once sued the SPLC. You can do a lot worse than these two.

This is, of course, a secondary activity, and only for people who can afford it.

The second course of action, which I explore in my dystopian novel Charity’s Blade, is to prepare for how the ascendant non-white Left in the twenty-first century might overextend itself and, in effect, declare an openly racist war on whites. Given the hatred and contempt the non-white political class has for all whites — not merely the uppity ones on the Right –, this is a definite possibility in the next 20 or 30 years. Such an action will force the issue to a speedy conclusion, and American whites will either win and establish something akin to a white ethnostate or lose everything. Nothing can hasten history better than a war.

For American whites, preparation for this means buying guns and learning how to properly use them, studying basic military tactics, developing survivalist skills, and the like. But the problem here is that it is still a form of waiting. We are still letting the enemy take the lead in this little death waltz we’re in.

So what can we do that is proactive?

The third course of action for White Nationalists today, and the main point of this essay, is to support Red State Secession.

I discovered this organization from a link at American Renaissance, and darn if they don’t say all the right things. Their point is to initiate metapolitical and political change in red states in order to make a peaceful break inevitable. Yes, this seems extremely daunting, but the people who run this site and its concomitant substack have put a lot of thought into this project and made it a rabbit hole worth diving down.

“The purpose of this site is not to promote violence but to predict how the Right will avoid eternal rule by the Left on this continent,” the group’s About-Us page tells us. The site offers one or two articles per month, as well as memes, historical information, poll results, and a collection of links and sources for anything related to secession.

Here are a few memes you can take a gander at: 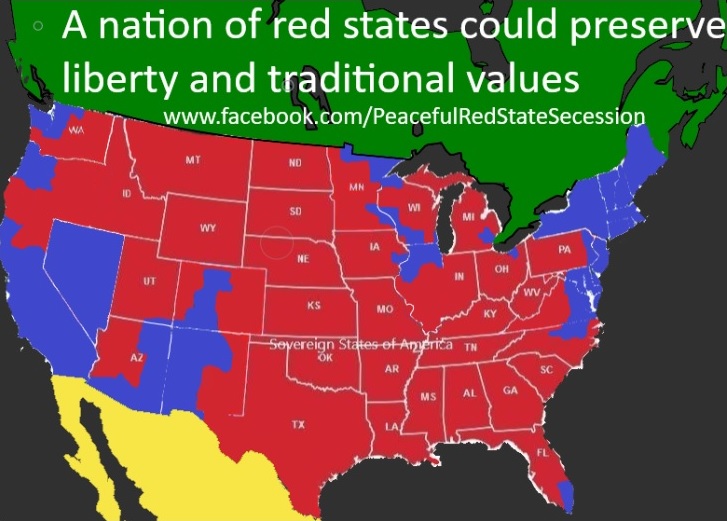 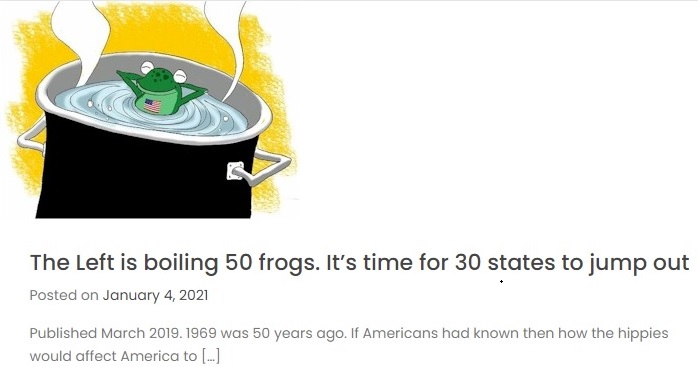 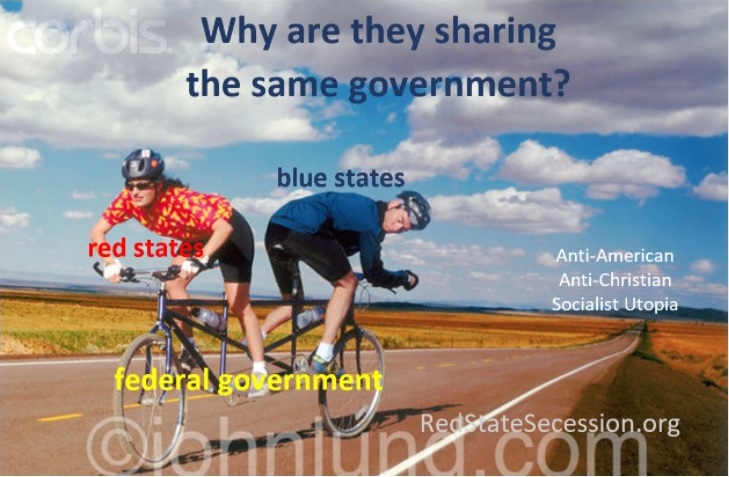 Secession is not necessarily national secession. For example, their December 26, 2020 entry argues that the twenty counties in northern Illinois that voted to separate from Chicago could be added to Indiana. It provides email addresses of all the state legislators who could make this happen. The site also offers information on Move Oregon’s Border and similar local or regional movements which could be considered secessionist. Much of this mirrors Greg Johnson’s take on Calexit back in 2016.

The big red-blue secession, however, remains their primary goal, and they articulate how to get there quite well while remaining unshakably realistic:

Admittedly, much attention needs to be given to electing secessionist governors, legislators, and state judges, which requires a robust state political organization. A single volunteer can easily make a significant impact on state politics because most volunteers are focused on federal politics. But it’s hard to attract the conservative movement’s attention to state politics until steps are taken to make state politics matter again. The best way to make state politics matter again is to start moving power back from DC to state capitols, since all decisions are made in DC currently. This can be accomplished by the willingness of state governmental officials to nullify unconstitutional federal edicts, mandates, and court decisions. Until a state government is willing to ignore a federal judge, the right wing cannot make a breakthrough.

Secession can be achieved in the near term, before red state citizens are thoroughly indoctrinated by the Left, and before their population is swelled by millions more immigrants who vote. It can be achieved while the Right still has strong majorities in some states: 2.6 Trump voters per Biden voter in Wyoming, 2 Trump voters per Biden voter in Idaho, 1.7 in Alabama, and 1.12 in Texas, to choose relevant examples.

Red State Secession also has a clear understanding of the danger presented by the Left. The worst of the worst, in their opinion, are activist federal judges. Not the mainstream media, not illegal immigration, not the Leftist academy: activist federal judges, whom they call “the primary enemies of our civilization”:

Activist judges discovered that Americans value the rule of law so much that Americans will enforce the rulings of judges even when the rulings are obviously unconstitutional. Presidents are afraid to ignore their unconstitutional rulings because the media would crucify them and perhaps get the president impeached and removed. Congressmen are afraid to impeach a judge, unless the judge committed a crime, for fear of getting crucified by the media and losing elections. So where is the “check and balance” on the judicial branch?

They make an interesting argument, and then follow it up with a list of 24 unconstitutional Supreme Court decisions and a list of “federal tyrants” who live in each state. My favorite page on the site, however, is “Current Status of Secession Movements in the US.” It’s almost a year old, but certainly worth your time.

What I find most attractive about Red State Secession is that they think outside the box and are pushing for metapolitical change in the same way that White Nationalists are, except they put race on the periphery of their platform and focus on patriotism, tradition, MAGA, America First, and other elements of Americana which makes the average Trump voter perk up and listen. Dare I say it, but in the absence of Civil War 2.0 initiated by Washington, Red State Secession has a better shot at achieving its goal in the short term (as in within ten years) than White Nationalism does.

This does not mean we should abandon White Nationalism. It simply means that White Nationalists need to practice a crypsis of our own and piggyback on a movement which, if successful, will coincide with at least 80% of our goals. If red state secession does happen, the white majority will shoot up in the resulting nation, the Left will be routed, and some semblance of pre-1965 normalcy will be restored. And if whoever is in Washington at the time of secession wishes to repeat 1861, then White Nationalists will not be a small minority that is easily hunted down, but part of a dedicated and heavily-armed coalition 80 million strong.

Are we seeing the benefits of this now?

Crypsis, however, means that among red state secessionists of all races, White Nationalists will have to avoid rocking the boat. It means practicing discretion when talking about race-realism, the Jewish Question, and other touchy topics — sort of like what many of us do now among normies. We simply have to understand that while red state secession is the end goal for groups like Red State Secession, it’s only a means to an end for White Nationalists. After the formation of a truly Right-wing red nation, the mostly-white populace will be free from Leftist dogma, and therefore much more receptive White Nationalist ideas.

I’ve made a similar point before in my essay “Wargaming Secession, Part 2” in which I introduce the ISEE Model of White Survival. This is something I believe all White Nationalists should internalize since it graphically illustrates the gradual return to our ethnostate. Again, in the absence of Civil War 2.0, there can be no other way. I have doctored the image slightly to underscore the point of this essay. 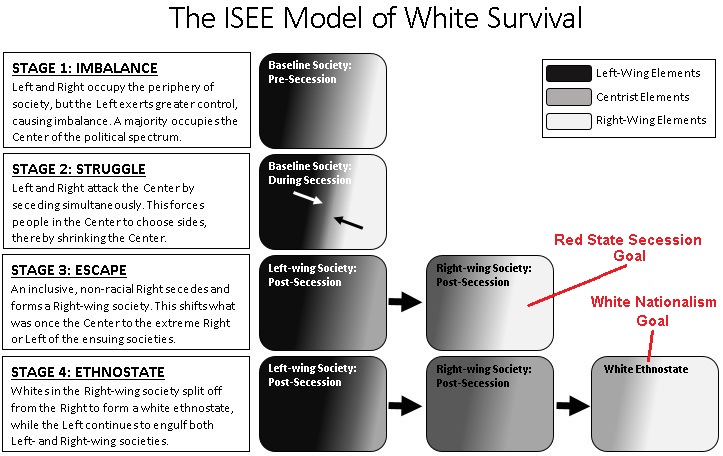 Forming anything resembling a white ethnostate on the North American continent will most likely take a long time. We shouldn’t expect to see it in the lifetimes of most of the people reading this. However, if we make our goals long-term and keep our eyes peeled for movements which share a good portion of these goals — such as Red State Secession — then we’ll have a hell of a chance.