The Lion, the Elf, & the Quarantine 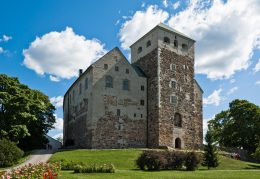 When King Gustav Adolf II of Sweden visited Turku Castle in 1614, a fire broke out around the complex, destroying one of the area’s oldest medieval sites. Left in ruins, the abandoned castle would become the setting of Zachris Topelius’s novel The Tomten of Åbo Castle (Åbo being the Swedish word for Turku). After being in self-quarantine this past week, I’ve had a lot of time to reflect on Topelius, his novel, and the history surrounding the iconic castle.

I first visited Turku last year while attending the Awakening conference, an annual event for Finnish nationalists. The day before the event, I was lucky enough to take a tour of the Castle with Tuukka Kuru, the organizer of Awakening, along with some of the event’s speakers and attendants. I was amazed to walk around the castle while learning about its rich and varied history, from being a defensive post against sieges to an administrative center for both Sweden and the Kalmar Union. As with many historic sites, most of the castle’s original structure has been destroyed by various fires throughout the centuries. By the late 17th century, the castle was abandoned. Yet our tour guide explained that much of the castle’s renovation efforts started after Topelius’s novel sparked a cultural fascination in the castle and its history.

Zachris Topelius was a Swedish-speaking Finnish historian, poet, and author. Throughout his life, he always had a passion for history. At a young age, Topelius met many young nationalists through Johan Ludvig Runeberg, a professor who would later become the national poet of Finland. While also becoming a professor at the University of Helsinki, Topelius started writing historical short stories about Gustav Adolf II.

After the success of these stories, Topelius would write The Tomten of Åbo Castle, interweaving Finnish history into an accessible fairy-tale narrative. The story follows the friendship between Tomten, a 700-year-old elf who lived in the castle since its creation, and Matti, the boy who would become the lifelong janitor at the castle. As their friendship develops and grows, Tomten continues to help Matti repair the castle as he tells Matti about all the historical people and events Tomten witnessed during his life at the castle.

The novel became immediately popular and would inspire the community and various historical societies to raise money to renovate the castle. Topelius would also go on to write various poems, novels, and even the libretto for the first Finnish opera. Yet The Tomten of Åbo Castle would remain one of his most famous and popular works.

I was in Turku again last weekend, although I wish the circumstances for visiting were different. After seeing just how quickly the coronavirus was spreading throughout Europe, I decided to cancel all my upcoming plans and book the next available flights home from the Balkans. My flight plan was to first fly into Turku where I would spend one night before flying out to Stockholm the next morning. As I was booking my flights, I contacted my friends to see if anyone wanted to meet me in Turku Sunday evening for food and drinks.

I quickly found out that many of my friends were attending a nationalist event in Turku that very same weekend. Unfortunately, the conference was being held on Saturday and the only flights available were on Sunday. Lucky for me, a friend of mine was spending the whole weekend in the area and was able to meet me at the airport when I arrived. Over pizza, coffee, and salmiakki ice cream, he gave me a rundown of the conference and speakers.

Aamunkoitto, or New Dawn, was an event organized by members of Perussuomalaiset Nuoret, a nationalist youth group, and featured prominent names and personalities in the nationalist community. The speakers included Tuukka Kuru (from Awakening), Linus Linsen, Toni Jalonen (who’s recent speech at Etnofutur created a big controversy in Finland), Pauli Kaila (from Ukonvasama), and Tiina Wiik (from Happy Homelands and Vihapuhe FM). The event had a great turnout and all the speeches were well received.

My friend also described some of the challenges the organizers faced in planning the event. As usual, Antifa tried to get the event canceled. Once they heard about the event, Antifa began calling various hotels and restaurants throughout the area, threatening each establishment with violence if they rented their venue to any known nationalists. Without divulging too much information, our guys were able to find a secure venue and arrange safe passage for all of the speakers and attendants. I wish I was able to attend the event and help the organizers out in any way possible. From experience, I can honestly say that when we have events that get threatened by our enemies and outside forces, the camaraderie between our friends and brothers is an experience that truly brings out the best in everyone.

After saying goodbye to my friend, I headed to the airport and boarded my flight to Stockholm where I had a four-hour layover before returning home. I’ve always said that you can tell the real demographics of an area by looking at the staff at the mall or retail areas of an airport. When I walked around the Stockholm airport last weekend, other than the flight crews and Border Control staff, the majority of the people working at the airport were non-white.

They say that Sweden has always been a nation of immigrants. They say that Sweden has no culture. “Nothing” represents Sweden, or so Scandinavian Airlines proclaimed in their recent ad before taking it offline. I see things differently. When I think of Sweden, I think of a white, Nordic people whose ancestors survived the cold, harsh winters using their intelligence, strength, and perseverance. I think of the Vikings. I think of king Gustav Adolf II and the feared Northern troops of the Swedish empire.

Often referred to as the Lion of the North, Gustav Adolf II was one of the most popular figures in Swedish history. He is remembered as being both a brilliant military leader and a successful ruler, introducing innovations in both warfare and administrative governance. Inheriting the throne at 16 with three ongoing wars, Gustav Adolf was able to turn Sweden into a European superpower through military conquest, pragmatic treaties, and efficient government policies. Even his death at the Battle of Lützen in 1632 proved to be one of the most decisive battles in the Thirty Years’ War, turning the tide in favor of the Protestants.

During his lifetime, Gustav Adolf became a symbol of Swedish pride and strength. So it makes sense that even 200 years after his death, Topelius would use Gustav’s popularity to start his writing career. The author would also incorporate Gustav into The Tomten of Åbo Castle, making the fire during his visit in 1614 an integral part of the story.

One thing I’ve learned from Topelius is that entertainment mediums are sometimes the best way to spread an idea or goal. Topelius used every medium and platform of his time to push his dreams and goals of Finnish nationalism. Whether it be poems, stories, or song lyrics, Topelius always incorporated nationalist themes into his work.

Another thing I’ve learned from both Gustav Adolf and my nationalist friends in Finland is that behind every successful leader are numerous specialists and support staff. While Gustav Adolf is credited for his military and administrative innovations, his closest advisor, Axel Oxenstierna, played a large role in implementing those changes. Likewise, both Tuukka Kuru and my friend who attended Aamunkoitto explained that their events wouldn’t have occurred if it wasn’t for people behind the scenes helping out and doing various tasks to make everything come together.

Now I’m back home after traveling through five different airports in four different countries. Even though I wore gloves and face masks at each airport and flight, I am self-quarantining myself for the next three weeks. In many ways I feel like Tomten the elf, stuck inside a castle, watching life go on without me. But even Tomten the elf was able to make friends and share his knowledge of the world. And just like the King of the North, so too can we as ethnic nationalists and white advocates strike a balance between bravery, honor, and pragmatism.

Whether you end up being quarantined or not, I hope all of you stay safe, healthy, and happy. Hopefully, when all this blows over, I’ll be able to meet all of you at the next nationalist conference. And if you ever take a tour of Turku Castle, be sure to ask the tour guide about the Lion of the North and the elf of the castle.