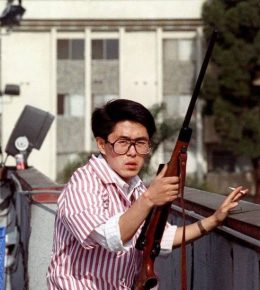 A man defends his store from the roof during the 1992 LA riots.

Asians now fear walking the streets in San Francisco and Oakland. Locals continue to rob and assault them without warning. Assailants even target the elderly. The national media, which prefers to ignore crime waves, is horrified by this spate of attacks.

Left out of the coverage is the fact that pretty much all of the assailants are black. Instead, the attacks are blamed on whites, Donald Trump, and xenophobia. “Former President Donald Trump fueled anti-Asian sentiment during the Covid-19 pandemic by using discriminatory rhetoric to describe the coronavirus, and may have contributed to the racist and violent attacks across the United States,” declared Human Rights Watch.

“Oftentimes, perpetrators have used the exact language of the prior president, words like ‘Wuhan virus, kung flu, China virus, China plague,’” California Asian leader Manju Kulkarni told NPR. “And sometimes they have even weaponized the former president himself, saying ‘Trump is going to get you, go back to your country.’”

Vice President Kamala Harris also blamed the usual targets. “Hate crimes and violence against Asian Americans and Asian immigrants have skyrocketed during the pandemic,” she tweeted. “That’s why our Administration has taken actions to address these xenophobic attacks. We must continue to commit ourselves to combating racism and discrimination.”

The Biden administration’s actions to tackle the attacks involve no crackdown on crime. Instead, the administration just banned government officials from calling Covid the “Wuhan flu.”

Some Asians are taking proactive measures and forming community patrols to protect their vulnerable members. Many in the community want more policing and tougher enforcement. Other Asians, however, are exploiting the opportunity to demonstrate that they’re oppressed POC and need to show solidarity with blacks. Asian Americans Advancing Justice president John C. Yang says it’s now time for his people to link arms with blacks to find the root causes of the attacks, opposing increased policing because it will harm blacks: “An increased police presence isn’t necessarily going to solve the problem,” he told NBC News. “We worry about over-criminalization of communities. . . . We could develop community-based solutions — assistance for the victims, assistance for the businesses that are damaged.”

Blacks approve this message. “We’re not going to allow any narratives that disrupt the relationship that the Black and Asian community has,” social justice minister Cherri Murphy said at a solidarity rally last weekend.

Asians rarely get opportunities to present themselves as the victims of racism. They have to go back in history to find examples in America. Many of the news articles brought up the “yellow peril” from the late 19th century, Chinese immigration restriction, and Japanese internment. So-called experts connect these trends to the current attacks. Apparently, black youths who dropped out of middle school are inspired by past white opposition to Oriental coolieism. Obviously, it’s a way to deflect blame from blacks onto whites. Blacks are our nation’s eternally blameless gods — the white man is always responsible for whatever blacks may do wrong.

Asians know it’s better to blame whites than the actual culprits. Pointing the finger at blacks opens them up to charges of racism and puts them into the category of deplorables. It will not gain them status or sympathy with the mainstream media. It’s much better for them to blame Trump and “systemic racism.” This places them firmly in the grand non-white coalition against the historic American nation and increases their moral status. It also diminishes claims that Asians are privileged and no different from whites. Asians and their conservative simps were outraged a few months ago when it was discovered a Washington school places this group in the same category as whites. No greater outrage can ever be conceived than to deny Asians their rightful place among the POC.

Asians earn more and are more educated than every other group. It’s hard to say how they face any discrimination outside of classmates slanting their eyes and shouting “Ching-Chong!” America has been good to Asians, but that’s not convincing this group to side with whites. Only 30% of Asians voted for Trump in the 2020 election. This demographic leans left on pretty much every social issue and they were repelled by Trump’s immigration rhetoric. Many Asians are leaders on the woke Left and younger, more assimilated Asians are more likely to support Leftist fads.

The one area where Asians find themselves discriminated against is in college admissions. The Ivy League rejects several Asian applicants in favor of less-qualified black and Hispanic applicants. The Trump administration sued Yale over its affirmative action practices that disadvantage Asian and white students last year. The Biden administration has since ended this lawsuit. Even though affirmative action hurts Asians, American-born Asians are far more likely to support it than their immigrant parents. They’re assimilated enough to know it is declasse to oppose affirmative action.

Conservatives still prefer to talk about Asians as the true victims of affirmative action rather than whites. You will rarely see an article in National Review or Washington Examiner that decries affirmative action as anti-white. It’s only castigated for being anti-Asian. National Review offered a recent example of this in a critique of the Biden administration. Yukong Zhao, president of the Asian American Coalition for Education, wrote for the conservative outlet that the White House fails in its pledge to defend Asians from discrimination by no longer contesting Yale’s racial preferences.

While affirmative action is bad because it harms whites and elevates unqualified non-whites, its discrimination against Asians may be the one good thing about it. We don’t want to live in a society run by assimilated Asian bugmen. Our country would probably be in even worse shape if Ivy League schools allowed more Asians in. They would likely take the spots of the few white gentiles admitted rather than the space reserved for blacks. The meritocracy is in part how we got to our present mess. The thought of Indians and Chinese fully taking over all of our elite institutions is horrifying. In our ideal society, we would want these quotas to ensure our elites remain largely like us. That would mean putting Asians at a disadvantage when it came to admissions.

The Ivy League is corrupt and should be destroyed, but not because it doesn’t allow Asians to dominate admissions. The “affirmative action discriminates against Asians” line is only useful insofar as it helps whites. If it leads to Asians becoming 50 percent of the student body, as it is at the University of California-Berkeley, then it does nothing to help whites. We still can’t get into these good schools, but now it’s because Asians rather than unqualified blacks gobble up the spots.

The anti-Asian crime wave in the Bay Area deserves similar nuance. If it convinces Asians to break away from the POC coalition and side with ordinary whites in support of law and order, then it could be a transformational event. But otherwise, it’s an example of people getting what they voted for. Asians voted for the politicians who coddle black criminals and cut police funding. Building coalitions with blacks ensures the attacks continue and the criminals walk free.

Asians need to realize their interests are not shared by their fellow POC. The world they vote for is what the Bay Area looks like now. Rising crime, failing infrastructure, soaring living costs, and human shit everywhere. A nice white country would never allow those problems to fester.

If Asians want to ensure their grandparents aren’t beaten to death, they’re going to have to switch sides.