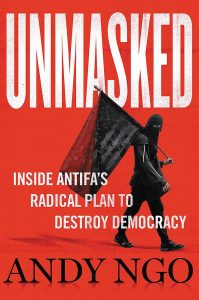 If you follow Antifa as a subject on social media, you’ve probably seen the Right-wing meme that portrays them as weak and effeminate . . . This is wrong . . . It is a catastrophic mistake to assume the Antifa aren’t capable of mass carnage. This is not a movement that follows the rules of engagement. They go for the eyes, the genitals — whatever it takes to “bash the fash.” If that means mobbing an individual in a twenty-on-one scenario, they’ll do it. And if it involves killing for their cause, they’re willing to do it as well. (p. 163)

Andy Ngo’s book about Antifa’s violent rebellion during the Trump years is a page-turner. The narrative starts on June 29, 2019, when Ngo was beaten at an Antifa protest. Ngo ended up in the hospital with a brain injury. Video from the event went viral, and he became a nationally known journalist.

Although the nation is aware of Antifa violence through social media and alternative internet news sites, Democrats and the mainstream media claim that Antifa is only an “idea.” The Jewish Congressman Jerrold Nadler called Antifa “imaginary” during a debate. In heavily Antifa infected cities such as Portland or Seattle, one can go day to day without seeing an Antifa event. Antifa tends to only operate in a group at certain hours and in certain places, but their effect is enormous.

Indeed, Antifa was the movement of the year in 2020. And this movement is deadly serious. “Behind the violence,” writes Ngo, “is a plan to destroy the nation-state, America in particular, to bring about a revolution that leads to their vision of utopia. In 2020, the country experienced a taste of this when a relatively small group of committed radicals incited and carried out massive damage to life and property in the name of “anti-racism” (p. 6).

Ngo describes the main Antifa hotspots in the summer of 2020 quite well. In Portland, Antifa demonstrate night after night. When activists are arrested, they are immediately released. In Seattle, their occupation of Capitol Hill — CHAZ — wore the mask of a Leftist utopia, but at night it was a dangerous, warlord-controlled place and there were several murders.

Although CHAZ had an ideology of racial harmony, the area self-segregated. By the end, CHAZ was a parasitical anarchist zone — the City of Seattle supplied toilets and other necessities, and outsiders delivered pizzas and other types of food. Meanwhile, legitimate business ground to a halt. Even the plants in the public garden wilted. Leftist societies always require a subsidy.

There is a heavy Jewish intellectual input to Antifa ideology. (Ngo doesn’t highlight this). For example, Herbert Marcuse (Jewish) is a major influencer. So is the racial Jew Karl Marx. But much of Antifa’s roots are non-Jewish. Antifa’s founders are the German Leftists of the Weimar Republic as well as the Leftists from the 1930s Spanish Republic.

Many Antifa ideas and tactics have come to America through British Antifa groups. The trick of mixing quick-drying concrete with a milkshake and throwing it at a person to blind and injure him while marking him as a target for a swarm attack emerged in England in 2019.

Antifa membership requires considerable reading in Leftist political thought. However, new applicants don’t need that much online Antifa-directed schooling in the first place. Marcuse’s ideas predominate in academia. His critical theory, in a simple and sweetened form, is even taught to children. Students today think nothing of attacking a speaker with whom they disagree. It is from these pupils that Antifa draws its recruits.

It is fair to say that Antifa is aligned with Black Lives Matter (BLM). The latter group has the same critical theory Marxist roots as Antifa and it traces its heritage to the sub-Saharan terrorist groups of the 1970s.

According to Ngo, Portland, Oregon has emerged as a mecca for Antifa mainly due to the work of Caroline Victorin (née Gauld). She and her long-term mate, a Swedish national, worked to bring Antifa ideas from Europe to Portland. Much of the mainstreaming of Antifa ideas was through cultivating the fans of Portland’s professional soccer team. It is not unusual to see Antifa flags at such games. Politicization of soccer fans is very common across Europe.

There are also bookstores and other businesses that support Antifa in nearly every conceivable way. Portland is so wealthy, so white — indeed Yankee — that few people really get an education in racial reality. The local culture is tolerant of eccentricity, so the butcher, baker, and candlestick maker that are supporting Antifa activists probably have no idea that they are lighting the fuse for the political powder keg that is the rest of America.

As a reminder, there were fewer than 40 deaths during the worst year of the Bleeding Kansas crisis, but when that conflict reached the rest of the country, Americans couldn’t bury bodies fast enough.

The “punch a Nazi” meme goes back to the 1940s. However, “punching a Nazi” might actually be a disastrous social policy. The issue has simply never come up since the end of World War II. However, the appearance of “Nazis” emerged in the minds of the establishment with the election of Donald Trump in 2016. Suddenly, the Establishment — many of whom were ethnonationalist Jews — were terrified.

Thus the Left and the Democratic Party’s behavior during the Trump years was a surreal example of hysteria and insanity. The Democratic Party’s champion, Hillary Clinton, had no ideas during her campaign except aggression with Russia. After her loss, she fielded a dubious Russian hacking conspiracy theory which the mainstream media uncritically pushed. There was an obviously Jewish attempt to remove Trump from office. Many more examples of this mania exist.

Meanwhile, the Democratic Party doubled down on stirring up black voter turnout in the midterms through BLM. Local political leadership, all Democrats, in Seattle, Portland, and Minneapolis support Antifa antics as part of the hysterical effort to damage the Trump administration and whites more generally. Ngo writes: “The local and national media are staunchly on the side of Antifa, regardless of their violence against police and property” (p. 61). These local governments have also reduced police funding. At the same time, many of the senior politicians in the Democratic Party often have children and relations involved in Antifa.

The US federal government was also hesitant to take on the role of defeating Antifa. One even might suspect that agencies like the FBI are sympathetic to Antifa goals and have members that are hostile to both Trump, and the historic American nation. When Trump sent in federal agents to arrest Antifa criminals, the news media claimed that Trump’s “stormtroopers” were arresting people without the normal protections. This was a lie.

The “parachute” journalists coming to Portland from Washington, DC, and New York didn’t have their finger on the pulse of the city or Antifa. To them, police and Trump were always to blame, never those who actually organized and initiated violence. Not only did the rioting continue after federal officers withdrew from the courthouse, it became even more violent and bled into other areas of the city. (p. 69)

Ronald Reagan warned in his farewell address that “younger parents aren’t sure that an unambivalent appreciation of America is the right thing to teach modern children. And as for those who create the popular culture, well-grounded patriotism is no longer the style. Our spirit is back, but we haven’t reinstitutionalized it.” Instead, we instituted critical theory, and now Antifa terrorists have appeared with critical theory talking points.

We’ve now seen how the anti-white establishment played its hand during the Trump years. So we need to get involved in the process of counting votes and influencing local governments. Critical theory needs to be examined and destroyed. The FBI, which has long been a semi-competent Pretorian Guard, should be abolished. Any worthy functions it might do need to be rolled into the Department of Homeland Security.

Andy Ngo has written the most important book of our time. Buy it, read it, and spread the word.