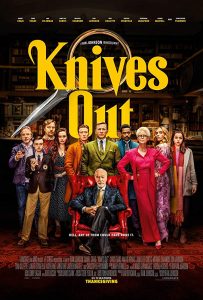 Knives Out, Rian Johnson’s much-hyped addition to the mystery genre, is a forgettable, self-indulgent film whose flashes of competence are incapable of redeeming its trite plot, pathetically unfunny script, and aggressive commitment to political correctness.

The film has all the trappings of a classic murder mystery in the style of Agatha Christie or Dorothy L. Sayers. A wealthy patriarch, Harlan Thrombey (Christopher Plummer, in remarkably good form at 90) is found dead in his mansion after celebrating his 85th birthday with his dysfunctional family; a gentleman detective, Benoit Blanc (Daniel Craig, sporting an atrocious Southern accent), is called in to investigate. Motives abound: Harlan had just argued with his grandson, cut off his daughter-in-law’s allowance, fired his son from his publishing company, and confronted his son-in-law about his affair.

On the night of Harlan’s death, his Hispanic nurse, Marta Cabrera (Ana de Armas), accidentally administers him an overdose of morphine — or so she thinks. Harlan, himself a bestselling crime writer, gives Marta a detailed set of instructions to follow so that she will have an alibi. Before slitting his throat in anticipation of his impending death, he points out that Marta’s mother is an illegal immigrant and that she could be deported if Marta is suspected of murder. This neatly summarizes his priorities, and Johnson’s.

De Armas is a pale-skinned, hazel-eyed actress of Spanish descent — a far cry from the swarthy gnomes who comprise the vast majority of illegal immigrants and their offspring. Johnson probably figured that white audiences would be slower to side with a more indigenous-looking actress — which, interestingly, is an implicit acknowledgment of the fact that white people naturally empathize more with their racial kin.

When the will is read, it is revealed that Marta has inherited all of Harlan’s assets. The family’s feigned kindness toward Marta sours into overt hostility, and they try to persuade her to renounce the inheritance.

The only thing the Thrombeys have in common is that they are one-dimensional caricatures who each embody negative stereotypes pertaining to a certain type of white person: conservative boomers, well-meaning yet clueless liberals, etc. It goes without saying that a film portraying blacks or Jews in a similar manner would be thoroughly condemned. Whites are the only group one is allowed to ridicule.

Marta, meanwhile, is a paragon of saintliness. She calmly endures the insults directed toward her and is unfailingly altruistic. She is so innocent and pure that being dishonest causes her to vomit, a ridiculous device with no basis in reality.

I will now spoil the film, though there’s not much to spoil, given that the identity of the murderer is obvious early on. The murderer is Ransom, Harlan’s elder grandson and the black sheep of the family. His guilt is evident not only due to certain giveaways (the barking of the dogs, Harlan’s mother’s remark), but also simply because Ransom is a masculine white man, making him the opposite of the consummately innocent Marta. And since his outsider status distances him from the rest of the family, Johnson needed to find another way to associate him with villainy.

Ransom attempts to incriminate Marta by swapping the labels on Harlan’s medication so that he would die of a morphine overdose by Marta’s hand. The slayer rule would prevent her from inheriting Harlan’s assets. But since she is incapable of wrongdoing, Marta ends up administering the right medication anyway.

Ransom has antisocial traits, but his motive was not objectionable. What angered him was not merely that he himself was denied his inheritance, but that his grandfather had given all that he had to a racial alien. Would he have committed the murder had Harlan cut him, alone, out of the will? Probably not. It is the opposite of what Johnson intended, but Ransom actually comes out looking like a man of principle. Even though he is hated by his family and hates them in return, he still believes that they should have been Harlan’s heirs.

Blanc, of course, mocks Ransom’s desire to defend his family’s home and claims that Harlan purchased the mansion from a Pakistani real estate mogul in the 80s.

The writing gets lazier as the film progresses. Ransom sets about destroying the toxicology report that proves Marta’s innocence by burning down the medical examiner’s office. When Ransom and Marta later arrive at the scene, they are spotted by Blanc, which ignites an utterly pointless chase scene. Johnson displays a bit of self-awareness here; a local detective remarks that it was “the dumbest car chase of all time.”

Ransom then murders the housekeeper, Fran (who saw him with Marta’s medical bag), and lures Marta to the scene of the crime in an attempt to frame her. His plot is foiled because Marta tries to resuscitate Fran and calls 911. Blanc concludes his explanatory spiel with feel-good drivel about how Marta’s “good heart” is what enabled her not to become ensnared by Ransom’s machinations.

Johnson clearly thinks he is smart. Blanc’s risible characterization of the case: “The doughnut hole has a hole in the center. It is not a doughnut hole, but a smaller doughnut with its own hole.”

On a technical level, Knives Out is not awful. The pacing is solid, and the editing during the first third or so was tight and effective. Johnson also makes judicious use of flashbacks. But the film’s strengths are far outweighed by its defects.

Incredibly, Knives Out has received nearly universal critical acclaim. Its approval rating on Rotten Tomatoes is 97%. Johnson’s self-congratulatory anti-white prejudice is undoubtedly the main source of the film’s huge appeal among mainstream critics.

The final shot of the film shows the exiled Thrombey family leaving the mansion while Marta smugly looks on from the balcony. It’s a potent illustration of our enemies’ vision for the future of America.