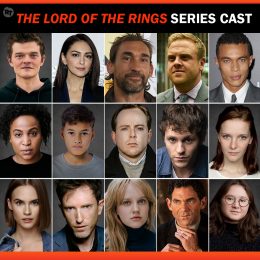 Amazon announced last week the diverse cast for its new Lord of the Rings series. Shortly thereafter, Christopher Tolkien, J. R. R. Tolkien’s editor and the guardian of his father’s legacy, died. (Hopefully, there was no connection between the events.)

Both events signal a change for Tolkien’s mythology.

Christopher Tolkien has closely guarded his father’s legacy for years and insisted that all media based on Middle-Earth must accurately represent the author’s intention. With Tolkien’s death and the cast announcement, it appears the new series may differ a lot from the classic film’s series. The Tolkien family may relinquish its tight control over LOTR-media and let the poz in. The descendants no longer worry have to worry about the old man’s misgivings.

The cast of the show is very different from the films’ Nordic cast. At least three of the actors are non-white and another handful are racially amorphous. Hardly any of the actors look Anglo-Saxon; nearly all of them look ugly.

‘The Lord of the Rings’ has found its fellowship!

This is the natural result of journalists hyperventilating about the lack of diversity in fantasy media. The original film series featured an all-white cast of protagonists battling inhuman Orcs, Uruk-hai and other assorted uglies. Critics were uncomfortable with the implications.

“`The Lord of the Rings’ is racist. It is soaked in the logic that race determines behaviour,” Guardian columnist John Yatt wrote in 2002. “The races that Tolkien has put on the side of evil are then given a rag-bag of non-white characteristics that could have been copied straight from a BNP leaflet. Dark, slant-eyed, swarthy, broad-faced – it’s amazing he doesn’t go the whole hog and give them a natural sense of rhythm.”

Liberal writer Andrea Lewis complained that LOTR pales in comparison to the diverse majesty of The Matrix series in a 2004 column highlighted by the great Sam Francis:

The “Rings” films are like promotional ads for those tired old race and gender paradigms that were all the rage back in author J. R. R. Tolkien’s day. Almost all of the heroes of the series are manly men who are whiter than white. They are frequently framed in halos of blinding bright light and exude a heavenly aura of all that is Eurocentric and good. Who but these courageous Anglo-Saxon souls can save Middle Earth from the dark and evil forces of the world?

Journalist David Ibata wondered whether the films were actually the “‘Lord’ of racism.”

“Certain scenes in ‘[The Two] Towers’ remind me of some of the most pernicious images of the cinematic past, from ‘Beau Geste’ to western serials to John Wayne war flicks: that of faceless brown hordes hurling themselves against a band of white heroes,” Ibata wrote for the Chicago Tribune in 2003.

Peter Jackson tried to placate this criticism with the inclusion of multiple non-white extras in his disappointing Hobbit series. Controversy surrounded that project after a Pakistani actress complained a casting director told her the film was only looking for light-skinned thespians. The casting director was fired and Jackson assured the press that they didn’t just want light-skinned actors. However, all the Hobbit stars were white.

It’s surprising to read the reactions to the Hobbit controversy. Some critics argued it was okay for the film to only request light-skinned actors and that this was a whole lot about nothing. If this incident happens with the new show, it would be a major controversy for months, every critic would denounce the show’s producers, and more heads would roll than a mere casting director.

LOTR’s unbearable whiteness—and that of the fantasy genre as a whole—still agitates critics.

“There are no black people on ‘Game of Thrones.’ You don’t see one black person in ‘Lord of the Rings,’” Star Wars actor John Boyega said in a 2017 interview. “I ain’t paying money to always see one type of person on-screen. Because you see different people from different backgrounds, different cultures, every day. Even if you’re a racist, you have to live with that. We can ruffle up some feathers.”

This criticism has increased since the release of the last Hobbit in 2014. Game of Thrones was a far more pozzed creation than the LOTR films, yet critics still could not cope with the nearly all-white cast. The show had a legion of STRONG WOMEN characters and upheld AWFL (affluent white female liberal values) values. In contrast, LOTR expressed a right-wing worldview based on a pagan-Christian synthesis. Regardless of the differences, critics frowned upon GoT for the same reasons they disliked LOTR.

The criticism got to GoT’s producers. The canceled prequel series was set to have a very diverse cast led by female showrunners.

Newer fantasy shows try their best to start off with diverse casts. The Witcher features several non-white characters, even though the book series and video games depict only white characters. A redheaded female character is portrayed as a frizzy-haired mulatto in the show. Other white characters are played by Africans. The changes were praised by critics but despised by fans, particularly in China.

Films and TV series that are supposed to be based on actual history now include anachronistic diversity. The 2018 film Mary Queen of Scots depicts the tragic monarch surrounded by non-white courtiers and servants. BBC historical dramas are now likely to feature black English kings and queens. Left-wing scholars and writers insist that this is actually historically accurate and this is necessary to push back against the “fallacy” that “Great Britain is predominantly a white nation.”

Historical dramas that lack sufficient diversity can expect a serious lashing in the press. 2017’s Dunkirk was lambasted for its depiction of an all-white British military. 1917 made sure to include South Asian soldiers in the trenches to ward off this assault.

Fantasy’s more progressive sibling, science fiction, is more advanced in featuring non-white stars. The original Star Trek was a pioneer in diversity and liberal elite values. The aforementioned Matrix was replete with racial and gender diversity. The new Star Wars trilogy was extolled for its non-white stars—such as John Boyega—and powerful female leads.

However, the new Star Wars flopped in part due to its obsession with satisfying the dictates of left-wing journos. Chinese audiences hated Boyega’s character and promotional materials made sure to keep him in the background. The Asian character Rose Tico was so hated by fans that her role was dramatically reduced for The Rise of Skywalker. Nearly everyone thought the main character Rey was one of the worst examples of a Mary Sue in human history.

Boyega himself thought the movies sucked and continually mocked the Rey character online after the latest film release.

In spite of Star Wars’ failures, the Marvel Cinematic Universe plans to move in the same direction with more non-white, female, and transgender super heroes.

The new LOTR series is coming out at the worst time for a reactionary fantasy series. Media outlets spend all their time pondering whether a show validates left-wing dogmas and producers fear online hate mobs. The film series was blessed to be produced at a simpler time where these factors didn’t really exist. Its huge profits drowned out the few critics who called it racist and nobody demanded Aragorn be black.

Amazon has the power to ruin LOTR like Disney destroyed Star Wars. Considering the garbage Amazon produces—such as a show about a team of black women and Jews hunting down non-existent Nazis in 1970s America—this is a likely possibility.

There’s still a chance that the Amazon series will still be good in spite of the intrusion of diversity. The Tolkien family still keeps an eye on the product and demands it conforms to J. R. R.’s vision. We may get some black elves, but at least they won’t be gay or transgender elves. This is one positive sign it will not end up like the new Star Wars trilogy. George Lucas had zero say over the new movies, likely making them worse.

Fantasy is a right-wing genre that inspires readers with a world of epic heroes and legendary tales. Readers love the genre because it offers an escape from our fallen age full of false heroes and cringe. Many people like that LOTR and other fantasy works are rooted in European traditions and values and uncorrupted by the stench of modernity. They don’t want to read about obnoxious female soccer players and morbidly obese models fighting against the patriarchy for bedtime reading.

If Amazon decides to emulate Saruman and scour Tolkien’s lore, viewers may be greeted with such abhorrent protagonists in medieval armor.