Midway:
Fighting for a White Country 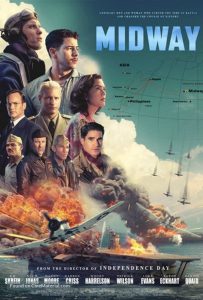 This is how a patriotic American film should be made and is superior to its director’s most famous foray into American history, The Patriot. Midway and The Patriot are both hokey, but the new film is much less cheesy than the 2000 Revolutionary War film. Midway also promotes a less pozzed message than The Patriot. The America the airmen and sailors fight for in Midway is white and defined by its people. The America the revolutionary militiamen fight for in The Patriot is an idea that can be shared by all.

Midway is also simply more enjoyable and a better film than The Patriot.

The new film is a bit cheesy, but that adds to its charm. It’s also pretty family-friendly, as it features hardly any gore or vulgarity. It’s refreshing to watch a film so out of step with modern war films and more like old classics such as Tora! Tora! Tora! and Battle of the Bulge. It’s no surprise critics hate Midway while audiences love it. (It currently sits at 42% for critic rating and 92% for audience rating on Rotten Tomatoes.)

If the title didn’t give it away, Midway is about the Battle of Midway. The major American victory turned the tide in the War in the Pacific. One of America’s biggest airports is named in its honor and the battle has inspired scenes in Star Wars and many other films. Arguably, it should be more remembered than it is today, but the Pacific War receives far less attention that the European Theater. It’s more politically correct to see white ethnics fight Nazis than it is to see whites battle an Asiatic foe.

Midway has been a lifetime mission for its director, Roland Emmerich. Emmerich, a German, specializes in high-budget goofiness and directed such blockbusters as Independence Day and The Day After Tomorrow. But he couldn’t find any Americans to finance a patriotic film about one of the greatest battles of World War II. So Emmerich turned to the Chinese, who surprisingly approved of film extolling American nationalism. The Chinese production company apparently did not require any paeans to diversity.

The Patriot was financed by Hollywood and includes paeans to diversity.

Midway is a pretty simple story. The Japanese attack Pearl Harbor, the good guys want revenge. The good guys get it at Midway. The movie doesn’t feature any ridiculous love plots (unlike 2001’s Pearl Harbor) and stays focused on the main story. The few female characters are just there to support their husbands fighting the war. There are no diverse American characters to prove that non-whites love America too. A black sailor is shown for one second in the film–that’s the only non-white shown fighting for America.

The Pearl Harbor scene is designed to inspire revenge fantasies in American audiences. A tall, blonde-haired navy officer aboard the USS Arizona is setting up for church service and telling a scrawny agnostic sailor why he must attend the service. Then the Japs attack. The Nordic officer rescues the scrawny sailor and sends him onto another ship. Our noble officer stays aboard the doomed Arizona to man an anti-aircraft gun, dying a hero’s death.

The scene, like most of the film, is heavy on the CGI. At many times, the film looks like a video game. Some may find this to be a serious issue, but I found it fine. It’s hard to make a more realistic war movie with the amount of planes and ships required for the battle scenes.

His friends are pilots aboard the USS Enterprise cruiser. One is Lieutenant Richard Best (Ed Skrein), a cocky and insubbordinate maverick from New Jersey. The other is Lieutenant Clarence Dickenson (Luke Kleintank), a mild-mannered Southerner. Best, a real-life hero, is one of the film’s main characters.

Most World War II films like to portray America’s fighting force as an ethnic melting pot. In Midway, nearly all of the characters are Anglos and heartlanders who don’t reminisce about Brooklyn. The one clear exception is Gaido, an Italian from New York. The historic American nation fights for itself.

After Pearl Harbor, the good guys want to make the Japs pay. The famous Doolittle Raid is depicted, in which American bombers pounded Tokyo and crash landed in China. Chinese influence comes through in this subplot. Upon crash landing, Lt. Col. Doolittle is met by Chinese communists who thank him for attacking Japan and proudly escort him to safety. The ending of the film makes sure to mention the thousands of Chinese who were killed by the Japanese in retaliation for the Doolittle Raid. The Chinese, unlike the Japanese, are pro-American and good-natured in the film. American audiences are told to remember who helped us in the battle of Midway.

This brief snippet of Chinese propaganda is unintrusive and doesn’t sully the film. It’s certainly a worthy trade for Midway’s distinct lack of poz.

The Japanese side of the war is also shown. The commanders are mostly noble leaders who devote themselves to honor and the emperor. They also show no regard for the rules of war. Gaido is captured by the Japanese after his plane is shot down. He’s thrown into the sea when he refuses to give the position of the American ships. The Japanese commanders also go down with their ships and try to crash land their planes into enemy targets.

The battle of Midway itself is an entertaining spectacle, regardless of how much it looks like a video game. It’s riveting to sit in a theater as you see the battle through the cockpit of a dive bomber. The flak is all around as you root for the Americans to find their target. Most of the film’s heroics are historically accurate, from Best leading a squadron on a dangerous bombing run while plagued by a bad oxygen tank to Gaido rushing to a machine gun turret and shooting down a Japanese bomber attempting to crash into the Enterprise.

At the battle of Midway, the Americans sunk four Japanese carriers at the cost of only one U.S. carrier. Japan could never recover from the loss and the war quickly became a drawn-out retreat for the island nation.

Midway’s heroes explain the reasons why they fight and die for America. It isn’t because America is a democracy and it isn’t because it’s a noble idea. It’s because it’s where they and their families live. They worry if they lose Midway, the West Coast will be put under siege and terrible things will happen to their families in Hawaii. They also want to avenge the American blood spilled at Midway. There is no talk of introducing Japan to liberal democracy or abstract values. America is a real nation with a real people–it is far more than an idea in Midway.

The Pacific War was a racial conflict. The Japanese declared themselves as Asia liberators of the white menace. America’s predominantly white military saw an alien foe with an alien culture and alien values. This racial dynamic explains why there are fewer Pacific War movies. It’s dangerous to show heroic whites defeat evil yellow men. It’s far better to make films about scrappy Americans killing Nazis. The system’s values are upheld by Saving Private Ryan and Inglorious Basterds. It’s uncomfortable for elites who champion WW2 soldiers as the original Antifa to see them happily kill non-whites.

Midway may upset some viewers as too much like Independence Day on the Pacific, but it is still refreshing from the usual Hollywood schlock.

Now to compare it to The Patriot…

Many identitarians like The Patriot. It stars Mel Gibson as a Revolutionary War guerrilla who hacks redcoats to death. It’s an easy sell to a Dissident Right crowd who will enjoy any film with Gibson in it. Critics at the time attacked it as Nazi propaganda. “If the Nazis had won the war in Europe, and their propaganda ministry had decided to make a film about the American Revolution, The Patriot is exactly the movie you could expect to see,” declared film critic Jonathan Foreman. Foreman also castigated the film for casting “unusually Aryan-looking heroes.” (Midway is also guilty of this “problem.”)

While The Patriot has terrific battle scenes and Gibson puts on a great performance, it’s far cheesier and more pozzed than Midway. The Patriot imagines the colonials fought a war to build a whole new world of racial equality. Gibson’s character doesn’t have slaves–he has paid laborers. Gibson finds shelter among blacks and let’s his family indulge in African culture. A racist white soldier who thinks blacks shouldn’t fight or vote overcomes his prejudice with the help of a black militiaman. The men fight for a new world built on liberal ideas.

The British are portrayed as savage marauders, committing war crimes with reckless abandon and murdering hundreds of civilians. They’re also less kind to the blacks than the colonials, even though they encouraged slave revolts and promised freedom if slaves fought for the crown.

The Declaration of Independence argued for separation due to King George’s support for “merciless Indian savages” and slave insurrections. The colonists felt the British favored non-whites over themselves and race was a major reason why the colonists revolted.

But that’s all ignored by The Patriot. The Revolution is portrayed as a struggle for the values of contemporary America, not the values of the Founders.

It’s still not an altogether terrible film. The virtue-signaling could be worse and the film doesn’t demonize colonialists. It just transforms them into something they never were.

Like the Pacific War, movies about the Revolution are rarely made anymore. It’s a shame to have few depictions of our very founding. The Patriot likely remains popular because it’s one of the few recent Revolution films. American audiences hunger for such content, but Hollywood doesn’t deliver. Maybe studio execs realize audiences would reject the Revolution as a vehicle for progressive values.

We may soon see the absurdity of China financing the Revolutionary War film that lives up to Jonathan Foreman’s nightmares. If Midway is an indicator of what we can expect, then the theoretical film should at least be better than The Patriot.

Americans see history through film and TV; and the most important historical event is World War II in Europe. Too many in our country see World War II as a struggle against Nazism and racism. This false vision allows our elites to denigrate nationalism as un-American and Nazi-like. In reality, the soldiers were more like the groypers than antifa. They believed America was a white nation and opposed racial integration. The America created by post-war elites–or imagined in The Patriot–is not the country they fought for.

Midway reminds us of that lost country and what we must fight to restore. Too many brave men died for us to give America permanently away to the globalists.