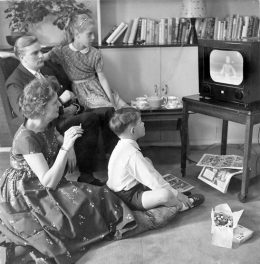 With a whoop and a holler, politicians have suddenly discovered that there’s a wild animal called the American middle class prowling around the voting booths, and officeholders are pounding down the stairs to make sure the rough beast does no damage once it gets inside the house. Almost every issue that has emerged in national politics in the last year — term limits and taxes, housing and health care, racial quotas and rascals in government — centers around the cultural identity and material interests of the middle class, and the nation’s incumbent oligarchs well understand that all the growling about such matters is rather like the roaring of lions in the jungle night. It’s when the roaring stops and the hunt begins that they better start worrying.

The hunt began last fall with the Pyrrhic victory of the oligarchs over David Duke in Louisiana and the announcement soon afterwards of both Mr. Duke and Patrick J. Buchanan of their Middle American-oriented campaigns for President as Republicans. Before that, however, Democrats like Pennsylvania’s Harris Wofford and Iowa’s Tom Harkin were raising populist banners that the white middle class was likely to find attractive. At the same time, even the oracles of conventional wisdom were beginning to perceive that the middle class was in economic trouble. Columnist George Will, ever a reliable source for what is respectable to think and say, announced his persuasion that middle-class economic distress was a significant political force, and Newsweek magazine, which is even more conventional if not always as wise as Mr. Will, rehearsed the facts and figures of middle-class withering in a cover story the following week. Other journalistic accounts around the same time — in The Philadelphia Inquirer, The New York Times, and The Washington Post, among others — also burrowed into the statistical underbrush to document the same story and sagely pondered its political implications.

The arithmetic of annihilation is by now reasonably familiar. As Mr. Will reported, “The wages of average workers are below 1979 levels, but family incomes have been maintained by wives going to work. In 1960, 30 percent of wives with children under 18 worked. By 1987, 65 percent did. . . . In 1950, the average middle-age middle-class homeowner spent 14 percent of his gross income on mortgage payments. By 1973, that had crept up to 21 percent. In the next 10 years it rocketed to 44 percent. Home ownership rates, which rose for six decades, declined.”

The reality of middle-class decline is masked by the continuity between the figures for income levels in earlier periods and those for more recent years. The reason for the apparent continuity is that wives are working and thereby bringing in extra income to compensate for what would otherwise be a clear fall in earnings and living standards. The middle class runs faster, and expends more energy, to stay in the same place.

Of course, there are the perennial optimists, mostly self-described “conservatives,” who make a living out of claiming that the middle class is more prosperous than ever. They like to point to the availability of VCRs, personal computers, and shopping malls to make their case that we’ve never had it so good. Such cheerleaders seem not to have met Mrs. Margaret Collier of Peoria, Illinois, and thousands of wives like her. Mrs. Collier in fact doesn’t hold a job, but that’s because, as she told The New York Times, “It takes me working full-time at home to keep the bills down to the point that we can live on his [Mr. Collier’s] income. I split the wood [for the Franklin stove], plant and work a vegetable garden, can vegetables, buy meat when it is on sale, help my husband fix our cars.” Not only does Mrs. Collier not have a personal computer. She seems to live at pretty much the same economic and technological level as an Apache squaw before modern civilization liberated her.

As for home ownership, the Census Bureau reports that today only 9 percent of the nation’s renters can afford to buy a home and that 36 percent of actual homeowners would be unable to buy a median-priced home if they had to do so on the market at the time of the survey. To own a home and support a wife who doesn’t work are, of course, deeply-held aspirations of the American middle class, and the decline of the ability to do so represents a serious economic demotion. It also represents an important social and cultural change. Home ownership — even the abstract and rather fictitious sort of mortgaged ownership to which Americans in recent generations have become habituated — is one of the traditional symbols of the economic and social independence that distinguishes free men from medieval serfs bound to the land or slaves fed from their master’s hand. It is difficult to see how the transiency that residential renting involves can be consistent with the kind of rooted commitment to community (or family, for that matter) on which republican government must rely. It is also difficult to understand how family institutions can flourish when wives and mothers must work for a living outside the home. That married women must increasingly do so means fewer children and alternate provisions for existing children — and for preparing meals, shopping, cleaning, etc. Today it means a massive redistribution of social functions and the psychic and moral dislocations that redistribution involves: husbands keeping house, children cooking for themselves, and women escaping the naturals bond of home and husband.

The economic independence of the middle class disappeared long ago, however, when modern corporate and governmental organizations began to swallow the independent businesses and farms that made the bourgeois class of the nineteenth century the core of American society, politics, and culture. At the turn of the century, as historian James Lincoln Collier writes, the middle class constituted “no more than a quarter of the population of the United States,” but nevertheless

it was the dominant section of the social system. It staffed the executive offices of the burgeoning industrial machine, it supplied the majority of office-holders in national, state, and to a lesser extent city governments, it created the art and literature of the time, and perhaps most important, it set the style which those who hoped to rise must follow. In a certain sense this Victorian middle class would — for the moment — decide what America was all about.

The moment did not last long. As Mr. Collier argues, the massive immigration into the United States in the late nineteenth century from Eastern and Southern Europe introduced alien subcultural fragments into a largely Anglo-Saxon culture, and the immigrants “were bringing to the United States an array of habits, attitudes, and folkways that conflicted, at times dramatically, with the prevailing American patterns of thought and behavior. They were, in sum, resolutely anti-Victorian in almost every respect. They did not believe in discipline, punctuality, sobriety — the order and decency of the Victorian ethic,” which was also a middle-class ethic, and as new immigrants rose socially and economically, especially through the mass entertainment industry they helped create, they displaced the Victorian ethic with their own anti-bourgeois patterns of living.

The “Victorian ethic” was itself a code well-adapted to an entrepreneurial society of independent, self-governing bourgeois, but it was a code that could not serve the mass organizations of corporation and state, union and political party, that were displacing the compact, autonomous, and decentralized institutions of the old republic. Absorbed within these organizations as workers, consumers, and largely passive audiences and voters, the American middle class ceased to be either independent or dominant, and it increasingly took on the characteristics of a proletariat, despite the affluence that it retained.

Middle-class affluence was itself preserved by the engines of managerial capitalism in close alliance with the administrative state, and if the middle class fought the wars and paid the taxes for the emerging leviathan, it also received no small share of the material benefits in the form of farm subsidies, small business loans, education through the G.I. Bill, housing policy, and union legislation. Having gained material security through its dependence on the managerial system, however, the middle class ceased to be both independent as well as the dominant and defining core of American society, and the bourgeois ethic of the nineteenth century slowly began to wither. By the 1950s, television’s situation comedies and the dreadful instructional films that warned teenagers of the perils of drugs, sex, drinking, rock and roll, and reckless driving recorded the lame efforts of a deracinated and dislocated middle class desperately trying to transmit its codes to its progeny and pathetically proving that it had not the slightest idea of how to do so.

Yet today even the moment of material security that the middle class enjoyed has proved fleeting, and what is occurring in the economy now is the final stage of proletarianization and dispossession before the middle class disappears forever as a distinct stratum of society. Fragments of the bourgeois ethic survive and provide a makeshift ideological framework for the middle-class revolt now bubbling in the suburbs and housing developments, but what feeds the revolt is not so much any fierce attachment to the Victorian ethic or the old republic it served as a demand for the kind of material security the post-bourgeois middle class once enjoyed.

What the leaders of the revolt must do is understand and make clear to their potential following that that kind of security cannot be restored unless those who demand it have gained sufficient political and cultural power to become again the defining core of the whole society and to identify the national interest with their own social interests and identity. But such political and cultural power can be gained only if the post-bourgeois middle class is able and willing to form a distinct social and political identity separate from the old bourgeois middle class and in opposition to the incumbent elites in the state, economy, and culture. Today the middle class has too many competitors among the underclass and its elite allies for the material benefits of the mega-state for the middle class to expect to retain the benefits it once enjoyed without a struggle for power. Moreover, the current elites not only don’t care about the economic security of the American middle class (or of America); they welcome its decline and destruction. The New York Times, in its account of the plight of the Peoria middle class, quotes Chairman Donald V. Fites of Caterpillar, Inc., the industrial mainstay of Peoria, that “There is a narrowing of the gap between the average American’s income and that of the Mexicans. As a human being, I think what is going on is positive. I don’t think it is realistic for 250 million Americans to control so much of the world’s G.N.P.” With leaders like Mr. Fites, the average American would be better off swimming the Rio Grande and seeking welfare in Matamoros. Only if the post-bourgeois stratum aspires to displace the incumbent elite, dismantle its apparatus of power, and itself constitute a new elite and re-constitute American society can it expect to restore its own security, preserve itself from destruction, and extend its present moment in the political sun into an enduring epoch of civilization.

This article was originally published in Chronicles Magazine in March 1992.