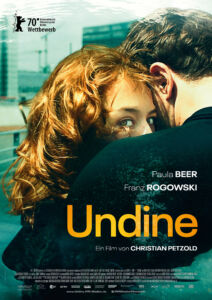 Christian Petzold’s Undine, set in contemporary Berlin, begins with Undine Wibeau (Paula Beer) having coffee with Johannes, her boyfriend. It’s not going well. She has deep, penetrating eyes and red hair that looks ready to blaze. She says to him: “You said you loved me. Forever. If you leave me, I’ll have to kill you. You know that.”

He tries to talk his way out of it, but she has to go to work. Undine walks off, changes into docent gear, and strides into a room full of visitors, all of them overwhelmed by scale models of Berlin filling the room. She looks down, descends, and lectures on city planning, reconstruction, the sewers and rivers of Berlin, and rebuilding the city over and over. Undine dominates the room and the vast collection of miniature cities of Berlin, much like a goddess, which isn’t far off the mark. She is actually Undine, a spirit who lives in the water, an elemental being mentioned by Paracelsus. Undine can love, and love deeply, but woe betide the man who is unfaithful to her. . . as Johannes will eventually find out.

Undine still simmers over Johannes’ presumed unfaithfulness, so much so that when she returns to the cafe and finds him gone, she looks at a fish tank and the model of a diver in the middle as goldfish dart about, and makes the tank explode. Just as Christoph (Franz Rogowski) sees this and pulls her to safety, their eyes meet, and it’s love. It’s a new take on a first meeting, but I felt sorry for the goldfish flipping around them.

Christoph is a diver. His forte is welding underground pipes in the sewers of the city. Among the denizens of the sewer is Gunther, a catfish the size of a VW Bug (“Wels” is catfish in German — it gives Gunther more personality), and Christoph’s partner, Monika (Maryam Zaree), who does the surface work.

Christoph and Undine sizzle. Their passion is deep and immediate, but he realizes she’s not your ordinary girl. He takes her diving and shows her where he works, seeing a column with “Undine” painted on it. He wants to show this to her, so he turns around, but Undine is gone. Her flippers, mask, and gear spiral down around him. He looks up to see her swimming with Gunther. He’s stunned — how many times has a girl dumped you for a catfish? — and brings her to the surface, where she revives and clings to him.

No matter; she is passionate and delighted to be with him, and one day when they’re walking in Berlin, they pass Johannes and a blonde. Undine turns, her eyes glaring as she walks on with Christoph — the scene in the poster — reminding us she has unfinished business with Johannes.

Christoph is still madly in love with her. He enjoys her lectures to tourists on the city of Berlin and the many shapes it has undergone, from the original city, to WWII, then East Germany, and the new, reunited Berlin.

Undine’s lectures remind me of one of Hitler’s favorite dreams of redesigning Berlin and naming it Germania. He envisioned new boulevards and a massive dome larger than St. Peter’s in Rome.

Undine seems as much at home as Hitler looking down over these miniature Berlins. If she is a supernatural spirit come out of the water to join humanity, then looking down on historical models of Berlin seems an apt job for her.

We also know that, unlike Disney’s The Little Mermaid, there is a dark side to love, especially if it is betrayed.

Undine finds Johannes enjoying a nighttime swim with his blonde, and she dives in and finishes him off.

Undine also believes Christoph has betrayed her. While he makes another dive repairing pipes, his equipment suddenly fails. He’s in a hospital on life support, his lungs wrecked, a grieving Monika by his side, for she is pregnant with his child.

Undine discovers Christoph avoided her, but what she interpreted as a break-up was a voicemail that went bad. So, he was faithful after all. Undine goes to the hospital to be cursed by Monika. She lays hands on Christoph, and he recovers.

She leaves without a word, then we see her slowly descend into the river.

Later, Christoph is on another underwater welding task. As he welds, Undine’s hand touches his. He looks into her eyes, and she, free and back in her realm, looks at him and pulls away, disappearing into black water.

Back on the surface, Christoph checks his underwater camera. It shows nothing.

Undine is a story of love with a spirit — the playful, sincere love of Christoph and Undine and her darker, cosmic side sneaks up on us. There is no dramatic music. It’s an intimate, offhanded love, curse, and denouement back into Berlin’s murky waters. Of love? Desire? History?

The underwater photography makes murkiness look mysterious and romantic. Berlin itself is a quiet, isolated world, reminding me of my time in East Berlin and its urban solitude. Undine, being a water spirit, almost makes her the genus loci of Berlin. The city was built on sandy marshes, and Berlin’s water table lies within a few feet of the surface. Many foundations for buildings have to be poured by scuba divers.

Undine‘s Berlin recalling Wagner’s Tannhäuser, where Venus keeps the Minnesinger Tannhäuser in her cave, he enchanted by her beauty. There’s also a bow to Das Rheingold. Undine is a very specific Rhine Maiden, but what does she guard? In a sense, she guards Berlin and its past. As a docent, she walks through one Berlin after another, much like Hitler did entranced with his beloved Germania, whom he delighted in showing people.

Undine mentions in particular the Humboldt Forum, the new name for the restored palace of the Hohenzollerns in the middle of the city, heavily bombed during the war, and pulled down by the East German government, mostly to destroy the past and make way for the new, heroic, socialist Germany.

On its ruins was erected a new center, the Palace of the Republic, or People’s Palace, a bland and ugly structure that had to be razed due to being hopelessly contaminated with asbestos. The gap left a terrible hole in the city center that the restored palace will fill.

Berliners eventually agreed to rebuild the old Schloss, but more as a museum specially dedicated to non-European art. It is interesting to note many of the non-Europeans are demanding the art there be returned to them.

The Humboldt Forum has been built, but the opening has been hit-and-miss due to the Coronavirus. Undine speaks of it with almost a sense of warmth, she who is supernatural. She calls it a dry, boring lecture, but Christoph is entranced by her recalling history.

I once asked Harold Covington what he thought of Hitler, and Harold said he thought Hitler was an avatar. It does seem that the more we move away from the 20th century, Hitler takes on a cosmic aspect. He almost becomes, like Undine, a spirit capable of great admiration, one that won’t be forgotten, despite a relentless propaganda campaign by his enemies. Hitler good? Evil? Beyond good and evil, as Nietzsche might jest?

Undine is no National Socialist, but that the film plays with historical and spiritual issues in contemporary Berlin. Undine can take life if her lover is false to her, but when she realizes her error, she rewards Christoph with life and allows him to be with Monika to begin his family. But he’ll always know that beneath the surface, below the still waters, lies a spirit as eternal as Berlin. This playful, thoughtful film has twists and absurdities, but what myth doesn’t?

» Counter-Currents Radio Podcast No. 351: State of the Movement Roundtable