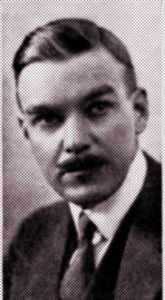 June 29 is the birthday of T. (for Theodore) Lothrop Stoddard (1883–1950)—scholar, lecturer, journalist, polymath, and author of many, many books.

Stoddard is best known for 1920’s The Rising Tide of Color: The Threat Against White World Supremacy, discussed two years ago here. Along with Madison Grant (1865–1937), author of The Passing of the Great Race (1916), and Prescott F. Hall (1868–1921), eugenics crusader and founder of the Immigration Restriction League, Stoddard can rightly be considered a father of the sweeping Immigration Act of 1924 (aka Johnson-Reed Act).

This Act pegged annual immigration quotas to the American people’s national origins as of 1890. It was our basic immigration and naturalization law for over forty years, until those quotas were abolished by the disastrous Hart-Celler Act of 1965.

Passage of the 1924 Act was of course a great triumph for Lothrop Stoddard, and for the countless others who labored for the cause of racial sanity and national sovereignty. What is not widely known is that Stoddard wrote a follow-up book to celebrate the Act and detail its history. That is Re-Forging America: The Story of Our Nationhood, published in 1927 by Charles Scribner’s Sons.

This book soon went out of print and is nearly impossible to obtain today in its original edition. The single copy I found in a large research library is falling apart, its yellowing pages crumbling to the touch. Fortunately someone thought to digitize its tawny pages for posterity, and you may now read it online.

Stoddard explains its purpose in his Preface: “[H]ow the bright promise of our early days was darkened by the disaster of the Civil War and by the blight of alien factors . . . [W]e awoke to the peril and are to-day engaged in the inspiring task of fulfilling the early promise of American life.”

The problems of national reconstruction are many. The closing of the gates to mass-immigration is merely a first step. Alien elements in our population must be assimilated. Political and cultural dissensions should be harmonized.

Above all, our great negro problem must be realistically and constructively dealt with. The dilemma of color, at once the most chronic and the most acute of American issues, has long been regarded with despairing pessimism. In these pages we have suggested at least a tentative solution which we have termed Bi-Racialism: The Key to Social Peace.[1]

As you might guess, “Bi-Racialism” is his proposal for a form of apartheid, not dissimilar to that which then obtained in the South and elsewhere, but one codified more fully into national law, yet one providing fairness and dignity for the negro.

Altogether it’s a very sunny snapshot of 1920’s American optimism, in the immediate aftermath of the 1924 Act. Stoddard presumed that we would not be so foolish as to overturn the new Act a few decades down the road. He did not foresee that the history behind the Act would quickly be forgotten, along with this explanatory volume.

The first section of Re-Forging America gives the familiar history of colonization and the nation’s founding, mainly by settlers from the British Isles, with a fair number of other participants from northwest Europe. From the time of the Revolution until about 1820 there was only minimal immigration to the new country. This was partly due to the almost incessant wars of the Napoleonic period, but it was mainly because of the difficulty of transporting oneself across the ocean.

The post-1820 story he breaks into two overlapping sagas, that of the Old Immigrants, consisting of “English, Scotch, Irish, German, Scandinavian, Dutch, and a few others of minor importance” (pp. 327–28)—essentially the same as the founding stock; and the New Immigrants, who began to arrive in great waves a couple of decades after the Civil War. While not necessarily “unassimilable” throughout, these newcomers had cultures, national origins, and patterns of arrival so different from the older groups that their alienation from the country at large was noticeable. For the first time, immigration, in both type and numbers, became a national concern.[2] And those numbers were huge:

It was in the period from 1890 to 1914 that immigration really inundated America. During those twenty-four years no less than 17,500,000 immigrants entered the United States! Furthermore, it was during just those years that immigration became most “alien” in character, since the bulk of these later millions were of South and East European or even of Asiatic origin; thereby bringing into America racial stocks, ideas, and attitudes toward life, which had previously been well-nigh unknown. (p. 92)

Contrasting these the with the still-continuing Old Immigration, Stoddard makes the insightful observation that the “Anglo-Saxon” element (which he describes as English, Scots, Ulster Protestants, and English-speaking Canadians):

forms the most numerous and constant stream of immigration which has ever entered America . . . Its volume may be judged by the fact that the Anglo-Saxon “immigrant” stock constitutes between 11,000,000 and 12,000,000 of our population.

Why is there so little mention of the Anglo-Saxon element in immigration? For a very significant reason. The Anglo-Saxon immigrant usually fits into America so well and assimilates so rapidly that his great numbers pass almost unnoticed. (p. 106)

Of course this is the same point made by Pat Buchanan in 1992, when he said it would be far easier for Virginia to take in a million Englishmen, rather than a million Zulus.

The next two largest Old Immigration streams in Stoddard’s scheme are the “Celtic Irish” and the Germans, both of whom are slightly smaller numerically than the “Anglo Saxons,” as of 1927. Although present in America from Colonial times, these groups’ immigration numbers famously surged during the 1840s. Stoddard falls back on the commonplace 20th century fallacy that this was due to a “potato blight” in the case of Ireland, and “political exiles” in the case of Germany. Utter nonsense. The great driver of immigration in the period was the growth of steam transport, by water and rail; which made the two main ports of embarkation, Liverpool and Hamburg, easily accessible from the hinterlands. Steam also cut the time of transatlantic crossings in half (for those who could afford the cost), and created a vast surplus of slower, obsolescent ships, thereby providing rock-bottom steerage fares (for those who couldn’t). Immigration from the United Kingdom as a whole accordingly surged during this period, as did that from northwest Continental Europe.

The next group Stoddard counts among the Old Immigration is the Scandinavian portion, who largely arrived after 1870 (4,000,000 in population as of 1927). Finally, the Dutch and Flemings, whom he numbers at about a half-million (pp. 110–11).

Preparing to dissect the “New Immigration,” Stoddard first makes a nod to the Chinese problem, which was almost entirely a Californian affair, from mid-century till the Chinese Exclusion Act of 1882. The basic issue was not anti-Chinese prejudice, or even that the Chinese were taking jobs from whites. Rather, Chinese were rapidly colonizing, and threatening to transform, that section of the country beyond recognition, much as they colonized Malaysia and threatened to do to Australia. He avers that if the Chinese had come to the Atlantic coast rather than the sparsely populated Pacific, America would have awakened to the Chinese problem, and that of the New Immigration from Europe, much sooner (p. 117).

This threatened change of national character to something “Asiatic” is one of Stoddard’s main complaints against the New Immigration from Eastern and Southern Europe. His racial codex seems embarrassingly rote today, with its talk of Nordic—Alpine—Mediterranean types; much like the fustier passages in The Dispossessed Majority.[3]

“Eastern Europe is next door to Asia . . . Scratch a Russian and you’ll find a Tartar” (p. 121).”The South Italians are a complex mixture of Mediterraneans with Asiatic and North African strains (chiefly Arab and Berber), together with a slight dash of negro blood” (p. 123).

Then we come to the Jews, and Stoddard is careful to parse out the differences: Sephardic versus Ashkenazic; German Jews versus Eastern Europeans. The Sephardic and German Jews are basically “no ‘problem’” (pp. 128–29). As for the Easterners: “They are very prolific, and now number well over 3,500,000,” and are roundly disliked by the others (p. 131). Stoddard treats the Jewish matter gingerly because he does not wish to upset the august publishing house of Scribner’s, or so we may assume. But he’s also repeating a cliché of his era, one that he probably heard at Harvard, and which persuasive German Jews were fond of encouraging: that they were upright and civilized, while the boychiks from Minsk and Pinsk were lowlifes who made people “anti-Semitic.”

Racial deficiencies, however, are not Stoddard’s core theme. He wants to make it clear that the flood-tide of New Immigration was not a natural influx of people seeking a better life, or wishing to live in the Land of the Free.  Rather, it was a byproduct of concerted, profitable maneuvers by special interests, most of them foreign:

The most prominent of these interests are the great steamship companies, which made enormous profits from the immigrant traffic, and which, being virtually all foreign-owned had absolutely no interest in what the immigrants they transported might do to America. The “steamship lobby” was one of the many selfish interests which long blocked effective immigration-restriction laws (p. 156).

And where else have we heard this routine? It sounds so much like the Agribusiness Lobby and their Congressional myrmidons, doesn’t it? Instructing that us we won’t have beefsteak tomatoes or Mother’s Day carnations if we don’t bring in another million mestizo peons this year.

Looking toward the future, with the 1924 Act behind him, Stoddard becomes endearingly naïve as he addresses the negro problem. He sees that negro and mulatto agitators, with help from Bolshevik Russia, are forming secret societies and hope to cause riots and conflagrations. But the bulk of the negro people are peaceable, he notes, and they will see that it is in their best interests to reach an productive modus vivendi with the white folks. As example, Stoddard quotes some of these peaceable negro thinkers (Booker Washington and Jerome Dowd, inter alia) on the advantages of racial segregation:

“Segregation enables the negro to find among his own people as many opportunities in the higher walks as are found among the white people. He may be a merchant, banker, doctor, lawyer . . .” (p. 294, quoting Dowd)

I don’t mean to mock Stoddard’s noble sentiments. He saw the situation clearly, and named the dangers. What he probably couldn’t comprehend was how thoroughly the rot had already set in, even as we were celebrating the passage of the Johnson-Reed Act.

2. The author skips over a legend beloved of today’s pro-immigration activists: the so-called “Nativist” and “Know-Nothing” movements that came and went in the 1840s and ’50s, under the leadership of a Jewish gadfly named Lewis C. Levin. Stoddard merely notes in passing that as a political force the Know-Nothings were both misdirected and ineffectual.

3. Wilmot Robertson, The Dispossessed Majority. (Cape Canaveral Fl: Howard Allen Press, 1972.)  Robertson may have cribbed a lot from this book of Stoddard’s. Not only are the racial discussions similar, but there is even a curious, obtrusive mention of the Gracchi.

» Counter-Currents Radio Podcast No. 220
The Birth of a New Nationalist Party in Hungary