Bannon:
Orbán was Trump before Trump 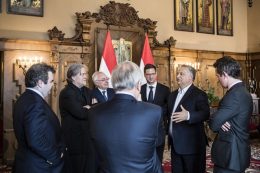 The following report was published on May 24 at the Hungary Report Website. A video of Bannon’s talk in Budapest is here.

Freedom is under threat today as globalization and the business interests behind it have declared war on the community, resulting in a “tough cultural war,” Gergely Gulyás, head of the Prime Minister’s Office, said late on Wednesday. Stephen K. Bannon, U.S. President Donald Trump’s campaign chief, chief strategist, and former senior counselor at the White House also addressed the V4 international conference entitled “Future of Europe.”

The fight is not between two cultures, but between the values of the free world and “deconstruction,” Gulyás told a two-day conference entitled “The Future of Europe” in Budapest. The question whether the “local” has a chance against the “global” much depends on what happens in the United States, which has just seen a political revolution, he said. Gulyás noted that US President Donald Trump’s victory came as a general surprise. Although it would be too early to assess his presidency, he added, it is obviously his “historic achievement” that Hillary Clinton had not become President of the United States.

Hungary follows Trump’s presidency with keen interest, Gulyás said, adding that the dominant trend is about giving back the people the right of decision-making and putting more emphasis on national interests. The underlying idea is quite simple: “dusting off” the system of democratic institutions and “freeing it from the shackles of political correctness,” he said.

Gulyas said there are some common points that may promote mutual understanding in disputes between the United States and Europe, for instance respect for traditions, defense of security and identity, and commitment to the nation and justice.

“The most important speech President Trump gave in the first year of his presidency,” said Stephen K. Bannon, Trump’s former campaign chief and chief strategist, was the speech the President delivered in Warsaw in July 2017. Quoting the US President, he said:

“The fundamental question of our time is whether the West has the will to survive.  Do we have the confidence in our values to defend them at any cost?  Do we have enough respect for our citizens to protect our borders?  Do we have the desire and the courage to preserve our civilization in the face of those who would subvert and destroy it?”

“Eight months later,” Bannon continued, “the people of Hungary gave us an answer – overwhelming victory for Viktor Orbán.” Speaking about Orbán’s relation to the mainstream Left-liberal media, Steve Bannon said: “I can tell, Viktor Orbán triggers them like Trump.”

He said that during an interview with BBC News recently, the reporter asked him about Hungary. The exact question she asked: “He [Orbán] said he was going to defend a Christian nation. Is this the end of liberal democracy? ” ”I said, Come on! Liberal democracy worked for them just fine for the 40 or 50 years they were winning elections. As soon as they start losing, we’re all fascists. We’re all authoritarians, mini dictators,” he said. “What we have today is not a political, but a media opposition.”

Although the American people were fond of former President Barack Obama, they would not really believe that he could bring about the change their country needed. Three-quarters of them held the opinion that the United States was on a downward path, he said, adding that only the elite, not the working class, supported the Democrats.

Lower middle class voters sought to give their support to a prospective leader who they saw capable of making the United States great again, Bannon said, adding that Donald Trump chose this notion to be the cornerstone of his strategy, at his advice. Speaking about Viktor Orbán, Bannon said that the Hungarian Prime Minister is motivating Hungarians the way Donald Trump is motivating Americans. He said Orbán had gained an opportunity to prove himself.

Europeans have grown tired of being dictated to by people from Brussels, Steve Bannon said in an interview with public news channel M1, adding that Prime Minister Viktor Orbán had become “a world political figure,” and this is the reason why he had come under attack. “Viktor Orbán’s victory and the scale of it — and particularly that he was so far out there and up front saying this is to defend the Judea-Christian west — is looked at … in America, England and the rest of western Europe as really a revolutionary moment,” he said.

“Orban is now a world political figure and he is going to be under fierce assault,” Bannon said. Commenting in the fence on Hungary’s southern border, he said: “You guys built the wall before we did, we’d like to have your wall.” “If you can’t defend your borders you don’t have sovereignty,” Bannon said, adding that “the southern border of the US is a total joke and President Trump knows that it is imperative that he has to build a southern wall.”

He went on to say that the rejection of the elite seen in the US had been already under way in Europe. “The working class, blue-collar workers in the US and the middle class were completely abused by the globalist elite that ran the country for the last twenty or thirty years and Trump’s victory was a complete rejection of that,” Bannon said. “Brexit was a foreshadow of the 2016 Trump victory and the populist nationalist revolt is about a year ahead in Europe than in the United States,” he added.

He also noted that in Italy “what they’ve done today and the last couple of days is they had a Right-wing populist party and a Left-wing populist party, and they put aside their differences on economics, the old traditional Left-Right divide and they said we’ll come to form one unity government . . . and leave aside the traditional Left-Right paradigm.” That is a major moment in European history, he said.

Bannon also said that “people are tired of being dictated to by people from Brussels, by a kind of managerial, scientific, engineering elite that’s going to tell them what’s the best way to live their lives.”

Viktor Orbán on Thursday met several people who spoke at the Future of Europe conference held in Budapest, the PM’s press chief said. Orbán spent an hour each with British conservative author and journalist Douglas Murray and with Steve Bannon, in his office in Parliament. He also talked with American economist and author David Goldman.