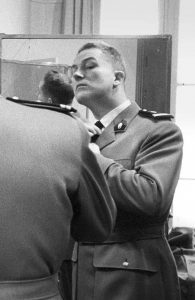 When I began to write these Memoirs in 2016, I decided to divide them into two volumes covering equal periods of forty-four years, the first going from my birth to that of the Front National, the second telling the history of the Front National as I had experienced it. I will take the opportunity at the end of this first volume to go back to my beginnings, to regain some perspective.

Chronology is more than precision, it is the structure of history and life. We only become what we are over time. Some forget this. Some say: I can be whatever I want. Other says: it is written, mektub.[1] These are symmetrical errors. I have written my life as I have gone along. In every one of its periods, I have acted according to my own way of thinking. I tell things as they happened, with the mental equipment of that time. And I tell things more or less chronologically. This establishes the structure of my Memoirs. In this first volume, I have told the picaresque adventures of a little Breton in greater France. I still have to quickly sketch the major factors: those which determined history in this half-century, and those which determined my own place and role. I will necessarily have to repeat two or three things that have already been said. This is normal in a summary. I hope I will be forgiven for it.

The post-war period witnessed the decline of Europe and the destruction of its empires under the effects of a decolonization that was encouraged by what were then called the two superpowers,[2] the United States of America (the US) and the Union of Soviet Socialist Republics (the USSR). Even before the end of the fighting in the Second World War, and immediately afterwards, under their leadership there began to emerge commercial and institutional globalization (the creation of the United Nations, the International Organization for Standardization, the International Court of Justice in The Hague, the World Health Organization, the United Nations International Children’s Emergency Fund, the Council of Europe, the Universal Declaration of Human Rights, etc.). In 1945, during the San Francisco Conference, Roosevelt proposed that this double hegemony should be organized peacefully. Stalin preferred to enter into a competition which would be called the Cold War, and which would lead to a dialectical relationship. This would put France in a difficult position in terms of tactics and strategy, as for example when the United States supported for a time our effort in Indochina [Vietnam] to contain Communism, even though their entire policy tended to favor eliminating us from Indochina, Suez, Algeria, and Africa.

We see that there are two ways to read this history, both of which are legitimate. From 1947, the Marshall Plan made Western Europe into a wealthy market for the US, while the Warsaw Pact created a hotbed of impoverished vassals for the USSR, leading to a double squeezing of our continent: We can thus describe the Cold War as a dialectical process utilized by the two superpowers to subjugate Europe and open the way for globalism. But at the same time, it is clear that this dialectic led to real and terrible conflicts, and that Communism is intrinsically perverse, as Pope Pius XI proclaimed in an encyclical; and that Communism, during the period covered by these pages,[3] underwent a spectacular expansion in both territorial and intellectual terms.

Between the immediate postwar years and the 1960s, the world map was covered with the conquests of regimes which were either Communist or supported by the Communists: in Europe (Germany, Hungary, Czechoslovakia, Romania, Bulgaria, and the Baltic states, with Greece escaping this fate only through a terrible civil war), in Asia (China, Indonesia, and with Malaysia under threat), and in Africa. What’s more, the public mind was submerged in a Marxoid[4] pensée unique which was visible in the press, the arts, and publishing. This mentality favored massive collaboration, in France and Europe, between the intellectual class and international Communism and their insurrectionary operations in France. Marguerite Duras[5] rightly said, “We did what the earlier collaborators did in relation to the Germans. We were collaborators.”

This was so even without the excuse of the occupation. The financial and hierarchical ties between Moscow and the French Communist Party, which we denounced at the time, have since been brought to light. The hegemony of Communism in the ambivalent processes of the Cold War and of decolonization remains the principal structural fact of this period, and I in no way regret having designated Communism as the primary enemy at the time. The threat posed by the Red Army was immediate. The gulag and the laogai’s camps were oppressing and killing people on a massive scale. In history, there are not only processes, there are also men, and the Communist bloc was worse for people than was the so-called free world, despite the latter’s own pretensions and weaknesses.

Many great consciences only began to distance themselves from Stalin after his death. Many more of them, such as Sartre, Picasso, and other, smaller fish, were remarkable by the odes they sang about him upon his death or the portrait they drew of him on that occasion. Incidentally, destalinization addressed nothing: the great destalinizer Khrushchev brought Budapest to heel and built the Berlin Wall. What’s more, on the whole the Communist Party’s fellow travelers have never repented and, worse, they long remained, if not the only recognized opinion-makers of this period, then at least the principal and most heard ones: in this respect, the case of Alexandre Adler[6] is quite amusing. Can we imagine Bormann speaking of the excesses of Hitlerism on France Culture?[7]

[1] The Arab expression for this concept.

[2] This follows a distinctly French expression for these two, which was also used by Raymond Aron: les deux grands.

[5] A French novelist and filmmaker, who notably wrote the screenplay for Hiroshima mon amour (1959). During the war, she worked for the Vichy regime as part of a committee distributing paper rations to publishers (an activity which meant de facto censorship), and then joined the French Communist Party, from which she was evicted in the 1950s for being too critical.

[6] A Jewish academic and journalist who was a Communist Party member and activist from 1968 to 1979. He then became a highly hawkish neoconservative pundit specializing in “geopolitics,” writing for Libération, Courrier international, and Le Figaro. Adler has taken the lead in policing supposedly “anti-Semitic” discourse, participating in the prosecution of Daniel Mermet and denouncing Dieudonné.