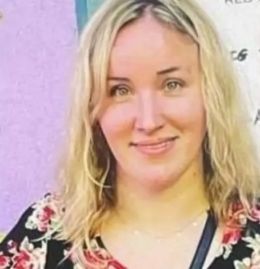 Vanessa Kurpiewska, above, was stabbed to death on the Toronto subway just before Christmas for no apparent reason; the perpetrator injured another woman as well.

Public transit construction, maintenance, and operation in Canada, like in so many countries, typically involves massive public expenditures, graft, incompetence, and cost overruns for any number of dubious reasons. And once the system is up and running there are equipment breakdowns and retroactive inquiries into procurement corruption, not to mention criminal activity as thugs target a captive commuter population. Sometimes it does work, but at other times, it fails spectacularly. When it does function, it is maintained by men and women with some sort of real, technical expertise.

In trust-based societies in which people are cooperative and ultimately just want to go about their daily business, public transit makes a lot of sense. Transit alleviates congestion by reducing the number of cars in the downtown core of major cities and allows municipal politicians to bloviate self-righteously during those ribbon-cutting ceremonies that no one cares about.

Almost every major urban area has some sort of transit network to facilitate their populations’ daily activities. Like so many systems in the increasingly multicultural Western world, public transit is suffering from a host of problems directly related to dealing with the presence of the other in its midst.

In one of his widely-read essays for Counter-Currents, Gregory Hood draws on an array of sources that refute the hackneyed multicultural shibboleth that “diversity is our strength.” Hood writes:

Race is the key building block of any real community and the farthest meaningful grouping to which we can give our loyalty. We know that genetic similarity and kinship patterns affect our behavior every day, even in ways we don’t expect. We know that children are race conscious as early as nine months. We know that people are mentally healthier in ethnically homogenous societies. We know diversity destroys social trust, eventually, even within members of the same ethnic group. The ancients knew this, and modern science confirms it.[1]

Our increasingly multi-racial societies have seen a decline in social trust, mental health, and many other observable metrics. Public transit systems across the West are microcosmic representations of that decline as furtive citizens negotiate its underground networks that are filled with mentally-ill vagrants, drug users, criminals, and ethnic mafias.

The Wall Street Journal just this past week published a piece on the Covid pandemic’s effects on transit use in the United States. Overall, ridership is down as more and more people are opting to work from home, which has resulted in a revenue shortfall. Financial aid from federal government sources to support transit systems has dried up as well. The article also revealed that many commuters who would have used transit in the past are now weary of it as they perceive it as unsafe.

A similar report from the Canadian press paints a near-identical picture. Transit ridership is down as a cluster of factors — including an increased number of people telecommuting, a high cost of living, and fare hikes — are deterring riders. In the first few weeks of 2023, for instance, the Toronto Transit Commission (TTC) increased fares and reduced service. This is something that low-income people feel acutely, especially in light of the steep rise in the cost of living. Revenue shortfalls are often followed by fare hikes, which in turn deter increased ridership in a cyclical catch-22. Although the article makes no mention of safety, it is undoubtedly a concern for many.

The perception that it is perilous to use subways, light rail, commuter rail, or buses is not unique to the United States, either. The increasingly vibrant cityscapes of Toronto, Calgary, Vancouver, and even Ottawa are seeing an increase in crime and mishaps on public transit systems. Just before Christmas of 2022, a columnist in the Toronto Sun penned an article about safety on the TTC system. Violent crime more generally is on the rise in Toronto, and that of course has translated into an increasingly anxious commute for many. The 70% decline in ridership levels reflect these concerns.

The column’s author, Brian Lilley, states that he is a regular rider of TTC subways and doesn’t blame people for staying away for fear of interactions with people suffering from a variety of health or addiction issues, or outright criminal violence:

I’m a regular rider of the Red Rocket taking the subway or streetcars daily at times, but co-workers, friends and family are apprehensive about getting back on. It’s hard to blame them given the filth of the stations, and the way people are camped out in the stations or on trains. Many of these people, like the ones I saw clear a subway car with a fight a week ago, are dealing with mental health and addiction issues. Advocates might recoil that some people would be so judgemental as to not ride the subway because of a raving screaming homeless man but that’s reality.

Just before Christmas, Vanessa Kurpiewska, a 31-year-old woman, was stabbed while riding a subway train in Toronto. The perpetrator was nabbed by police on the High Park subway platform. Tragically, Kurpiewska later died in hospital; another woman was injured by the same assailant. According to a spokesperson from the Toronto Police, the accused and victims were unknown to one another. In June of 2022, a woman was set alight on a Toronto bus: A man doused the victim with flammable liquid and set ablaze. Tenzin Norbu, 33, has been charged with attempted murder, along with other offenses.

In one of his books that comprehensively documents black criminality’s widespread nature in the United States, the late Colin Flaherty devoted an entire chapter to violence and crime on public transit. At the chapter’s outset, Flaherty writes ,“It is amazing how many of the more than five hundred examples of racial violence in this book are connected to public transit.”[2] The chapter documents a whole litany of incidents in a dozen American cities from Boston to Seattle and points in-between. In one particular instance, public transit facilitated a violent race riot in Venice, California in 2011:

A race riot in Venice, California, in 2011 featured fights and shootings. How many black people were there? The Los Angeles Times does not say specifically but called it “hordes” an eyewitness described it as a “human tidal wave.” And of course no riot would be complete without laughing and taunting . . . Afterward mobs of people rushed to the bus station to flee the scene by the same way they got there.[3]

Preferential hiring practices that skew towards unqualified diversity candidates are also an ongoing problem in many transit systems. Ethnic minorities are often fast-tracked through core competency training so that managers and elected municipal officials can check the diversity box in their year-end list of accomplishments. This is a fact that is often an unspoken assumption; indeed, it is an elephant in the room. Such was the case in one of the worst transit accidents in the history of Canada’s federal capital, Ottawa. An obvious diversity hire, Aissatou Diallo, was driving a double-decker bus when it slammed into Westboro Transitway station in 2019. Three people were killed and dozens were injured in the crash. At the opening of her trial in the spring of 2021, a Crown attorney asserted that Diallo did not brake or attempt to steer away from the collision course. Some of those injured will never recover, including Marcie Stevens, who had to have both of her legs amputated above the knee.

The phenomenon is widespread in the United States as well. In this personal account of a white subway train operator, it is obvious that many public transit systems become imbued with ethnic mafias because of preferential hiring or widespread non-white ethnocentrism where white people are not welcome. In this personal experience published in American Renaissance, Daniel Attila recounts his time as a conductor on New York City subway trains in the 1990s. Attila states that “the union is a mostly-black workforce, which cannot be tampered with by any politician who wants a career in New York.” He goes on to write that he was made to feel like an outsider by other employees who used physical intimidation:

I began learning about the reality of America’s racial dilemma right at the beginning of my training program at the Transit Authority. There was a huge black fellow in our class who had the habit of physically bumping into me at every opportunity. I could feel that he did this intentionally, trying to make it hurt more than an accidental collision would, but not enough to make it look like an assault.

In a recent article for True North, the author makes the argument that conditions on Toronto transit have been exacerbated by politicians being influenced by increasingly woke political activists. The TTC has its own security officers whose primary role is to ensure riders’ safety. They are not members of the police force and have only limited enforcement authority, but even their powers have been attenuated further. According to confidential sources within the TTC, fare evasion is endemic. Fare inspectors are told to walk away if riders refuse to pay; loiterers and panhandlers are not even approached. A 2018 audit revealed that 64 million dollars were lost due to pervasive fare evasion. Fare inspectors and other security personnel are given scant support from the city’s Mayor, John Tory, and are sometimes met with outright hostility for ideological reasons.

In his January 11 article that documents black-on-white crime in the United States, Kenn Gividen alerts readers to the dangers of so-called transitional spaces. From a self-defence perspective, transitional spaces are any location that individuals move through to get to their ultimate destination. They can be parking lots, parking garages, subway platforms, bus stops, and even your own driveway. Even though these spaces are designed for a specific purpose in mind, they allow criminals to engage in crimes of opportunity, especially against victims who are unaware of their surroundings, distracted, or otherwise oblivious.

In this day and age, it is increasingly important for white people in particular to be alert, vigilant, and aware in these transitional public spaces — especially public transit. Our once prosperous and safe nation-states do not exist any more thanks to the presence of hostile foreigners in our midst and the proliferation of unrelenting anti-white sentiment. It would be best if we hopped in our cars and made our way to a nice white country; it will be much safer there, even on the subway.

« The Secret of My Success