We Apologize for Your Feral Behavior 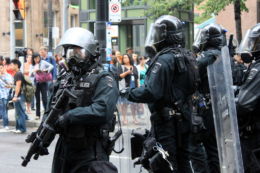 The Toronto police are being ordered to look the other way when non-whites commit crimes while using overwhelming force against peaceful white protesters, such as the Freedom Convoy.

On Wednesday, June 15, 2022, the Toronto Police Service released findings from its Race-Based Data Collection (RBDC) Strategy. This comprehensive initiative is “aimed at understanding and assessing racial disparities in its policing.”

This data demonstrates the unfortunate realities of those experiences. As an organization, we have not done enough to ensure that every person in our city receives fair and unbiased policing. For this, as Chief of Police and on behalf of the Service, I am sorry and I apologize unreservedly.

Historically, it has been the job of police to be beastly to scoundrels, use force against thugs, and stand up to bullies, all while protecting law-abiding citizens. Yet, today the Toronto police’s leadership and increasingly strident non-white lobbies are doing their utmost to turn non-whites into a protected class even when the latter are engaging in blatant criminal behavior.

It is understood as an absolute by those in power that the locus of control lies outside of blacks and other non-whites: It is never their fault that they engage in violent behavior, are disproportionately incarcerated, and suffer from any number of pathologies. The imposition of equality as a moral good, including equality of outcome, by a hostile anti-white elite has led to a situation where embattled whites try to hold this rotten multicultural edifice together.

The Toronto Star reported that it had obtained an internal Toronto police memo about the release of race-based data and that there would be further discussions “about the extent to which systemic racism has led to differential treatment of racial groups by our service.” The weeks that follow “will be challenging,” the memo stated, and the results will “lead some people to question the hard work you do every day.” It went on to say that “our members will be supported and our public comments will emphasize that this exercise is about systemic racism within systems and processes and not about overt racism by our members.” If the individuals in these over-policed communities are such paragons of virtue, as per Chief James Ramer’s press conference, why would such a memo be necessary? Why should the Toronto police have anything to fear?

It will be interesting to see if the release of these statistics result in the Toronto police adopting a pronounced hands-off approach to policing black and other non-white communities similar to what commentators in the United States have named the Ferguson effect.

When writing about the phenomenon in an American context, Greg Johnson explains that political violence organizations like Black Lives Matter (BLM) aim “to make it safer for blacks to commit crimes and more dangerous for cops to arrest them. The entirely predictable and obvious outcome of BLM’s efforts is more black crime.”

Over the weekend, following the release of the data, six shootings occurred. Two individuals were killed, including Jaron Williams, 24, and Bryan Bernard, 27, both of Toronto, and 11 people were wounded. A news conference held by Toronto police spokesmen detailed the six incidents. In a separate, shocking attack, a woman was immolated on a Toronto bus: A man doused the victim with flammable liquid and set her alight. Tenzin Norbu, 33, has been charged with attempted murder, along with other offenses; the Toronto police described it as “a hate-motivated attempt murder investigation.” These are just a few of the latest instances of anarchic violence in the city.

Toronto Police Chief James Ramer apologized to the Canadian “Indigenous” community for being “over-policed” as well. It would have been career suicide for him to tell the truth about the fact that Amerindians are the most violent people in the country. Ricardo Duchesne points out, quite rightly, that “Amerindians are the most violent, homicidal, self-destructive ethnic group in Canada today.” Dr. Duchesne has also stated that the northernmost territories in Canada, including the Northwest Territories, Nunavut, and Yukon, have the highest crime rates because of their majority Amerindian populations. Moreover, Amerindians in Canada are a self-destructive, self-victimizing group that engages in child sexual abuse and internecine violence on an epidemic scale.

Jared Taylor, in an open letter to then-Attorney General Eric Holder, spoke to the inherent characteristics that make blacks more prone to criminal behavior: “. . . blacks are at least seven times more likely than people of other races to commit violent crimes, and . . . young black men are the most dangerous people in America.” Moreover, Mr. Taylor writes that “. . . American blacks have an IQ of 85 whereas whites have an average of 100. I also invite you to consider the huge body of evidence that suggests this difference has a substantially genetic cause.”[1]

In his comprehensive essay for Counter-Currents, Richard Houck makes a very well-substantiated argument about the anti-white nature of policing throughout the Western world. While there are many conscientious white officers who do their best to adhere to traditional sensibilities, Canada’s police forces suffer from the very same malaise that Mr. Houck documents. Drawing upon Mr. Houck’s essay, Greg Johnson quite rightly states that

. . . whites are stopped, ticketed, arrested, and killed by police at a higher rate than they actually commit crimes, while blacks are under-policed in all these categories. Police are significantly more dangerous to whites than to blacks. This is in spite of the fact that the vast majority of police in America are white.

When whites misbehave, overwhelming force is brought to bear. In the winter of 2022, the Freedom Convoy movement that brought thousands of truckers and their allies to the streets of Ottawa, Canada’s federal capital, is an example of the anti-white nature of government and policing. Enormous force can suddenly be brought to be bear on an implicitly white protest movement, whereas mass black and non-white criminality in major cities is met with upper echelon public handwringing.

This summer, with the Toronto Police Chief’s apology as an epigraph, will be fraught with more gun violence, carjackings, and other mayhem.

« The Crossroads of Our Being: Civil War Commemorations During the “Civil Rights” Movement