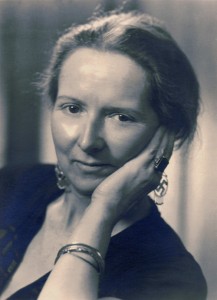 Savitri Devi was a philosopher, a religious thinker, and a tireless polemicist and activist for the causes of animal rights, European pagan revivalism, Hindu nationalism, German National Socialism, and — after the Second World War — pan-European racial nationalism. She also sought to found a religion, Esoteric Hitlerism, fusing National Socialism with the Traditionalism of René Guénon and Julius Evola. All told, she was one of the most extraordinary personalities of the 20th century.

She was born Maximine Portaz in Lyons, France on September 30, 1905. Her mother, Julia Nash, was English, descending from Viking stock. (She claimed that the name Nash is derived from Ash, as in the World Ash Tree.) Her father, Maxim Portaz, was three-fourths Italian from Savoy, one-fourth Greek. Because of her mixed-European heritage, she identified herself simply as “European.” She also described herself as a “nationalist of all nations.”

Savitri Devi died on October 22, 1982, in Sible Hedingham, Essex, England at the home of her friend Muriel Gantry. For a sad account of her passing, see Muriel Gantry’s “The Last Days of Savitri Devi,” selected from her correspondence by R. G. Fowler.

For more information on Savitri Devi’s life, work, and influence see R. G. Fowler’s website The Savitri Devi Archive, which was relaunched a year ago today and now contains many new texts and other documents that have never been published before. 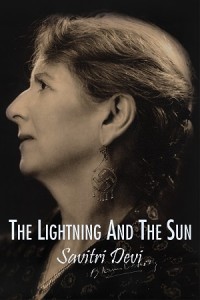 Seven of Savitri Devi’s books are currently in print in English and available for purchase at Counter-Currents:

Counter-Currents has now taken over publication of the Centennial Edition of Savitri Devi’s Works. The next volume will be a complete English translation of Memories and Reflections of an Aryan Woman.