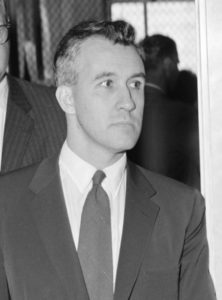 Thanks in no small part to Counter-Currents, the writings of Francis Parker Yockey are more popular than ever. The Centennial Editions of Yockey’s works follow upon at least two recent biographies of the post-war anti-liberal thinker. This is part of a trend I noted a few years ago. Yockey was all but unknown in his lifetime, but now is more read and relevant than mainstream contemporaries such as Drew Pearson, a Leftist who was once the most widely-read newspaper columnist in America, but faded into obscurity after his death.

Another underground writer who labored in semi-obscurity in his own lifetime was Wilmot Robertson. Like Yockey, Robertson also reaches many more people now than when he was alive. The two were contemporaries: Yockey was born in 1918 and Robertson in 1915. Both also got their start publishing essays in Social Justice magazine in the 1930s and ‘40s.

A lead article in the February 1982 issue of Instauration is titled, “Francis Parker Yockey and the Politics of Destiny.” Robertson gives his assessment of Yockey’s work in it. While he praises many of his ideas, The Dispossessed Majority author also had pointed criticisms of his fellow dissident. The article starts by laying out the basics of Yockey’s philosophy and notes that it was taken almost directly from his idol, Oswald Spengler:

All high cultures more or less follow the same timetable. Like flowers and trees and homo sapiens, they live and die, in their later stages turning into civilizations, in their last stages becoming empires (imperiums). Europe, in Yockey’s eyes, reached the imperial stage in the 1930s, and Hitler’s Germany was rigorously complying with Spengler’s law by piecing together the prescribed Western empire. But it was not to be. A passel of culture distorters and barbarians in America and Russia choked off the normal flow of organic history, and Europe, the heart and brain of the West, was all but destroyed. Instead of the Western imperium, there was chaos. Yockey’s principal theme in Imperium and a few later essays is that the West, which includes Britain and excludes the Slavic lands, has to get back on the Spenglerian track — a titanic task that can only be accomplished by a united Europe rising from the ruins, expelling Americans and driving back and defeating the Soviets.

Of course, Yockey would come to soften his view on the Soviet Union throughout the 1950s (Imperium was written in 1948) and came to see Russia as a possible ally in driving out pernicious American influence in Europe.

Where Yockey Gets It Wrong

It is no surprise that Robertson’s main complaint against Yockey is his definition of race. Yockey thought race was a matter of feeling. Robertson describes Yockey’s view as follows:

Physical distinctions are only of secondary importance, though blacks and Mongoloids are too biologically disparate to qualify as Europeans and Russians and Slavs too culturally disparate. To lend weight to his attack on what he describes as romantic racism, he myopically quotes the fraudulent experiments of the late Franz Boas, who alleged the descendants of Italians and Jews in America underwent racial changes as a result of the new American environment.

He has other criticisms as well. Robertson attributes Yockey’s Anglophobia to being pro-German as well as ethnically Irish and Spanish. He is less forgiving of Yockey’s disdain for Darwin and a good degree of modern science. Robertson writes:

Where Yockey seems old-fashioned, reactionary and hopelessly out of sync with the present age is his attitude toward science. “Every science,” he writes, “is a profane restatement of the preceding dogma of the religious period.” Goethe’s understanding of light is more accurate than Newton’s. Technology is considered hardly better than a perversion of science. If Yockey had lived to see it, he would probably have dismissed the Moon Walk as just another technological splash in the pond, an opinion dramatized by the Rev. Abernathy and his mules as they stood outside the Cape Canaveral space center whining that the Apollo mission was taking food from the mouths of the poor. Paradoxically, the greatest of all exhibitions of Faustian verve would have been shrugged off by the prize pupil of the Faustian Philosopher [Spengler]. 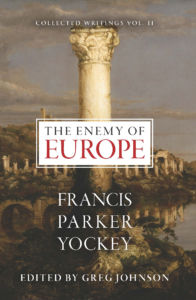 You can buy Francis Parker Yockey’s The Enemy of Europe here.

Robertson allows that Imperium is beautifully written and even compares it to an epic poem, but notes there are several factual errors in the text. He charges Yockey with making “sweeping generalizations and thunderous oversimplifications,” while pointing out more particular mistakes. Yockey claimed the judiciary was essentially dead right as it was getting ready to remake America in the 1950s and ‘60s with court decisions against whites. He apparently took as fact a dubious quote attributed to Benjamin Franklin about Jews. And echoing Revilo Oliver, Robertson notes that for all his emphasis on culture distortion, Yockey is silent on Christianity and the impact of a foreign religion on the Western soul. Summing up Yockey’s flaws, Robertson writes, “All such pronouncements add up to serious misconceptions of the past, present and future by a man who sets himself up as the prophet-philosopher of the middle 20th century.”

The Instauration article doesn’t mention what was perhaps Yockey’s greatest error. He was convinced World War III was definitely going to happen by the 1970s — although given current realities in Ukraine, Yockey may end up having merely been 50 years off target.

Where Yockey Gets It Right

These criticisms should not obscure what Yockey got right. Robertson noted that Yockey had a deep concern for Europe and Europeans and gave his life trying to revive the West. He created his own form of historicism and developed original insights in regard to culture distortion and the flawed nature of the United States (at a time when the American Right was almost unanimously patriotic). For Robertson, Yockey’s greatest value is in offering a way forward for whites. The author of Imperium is “one of the very few thinkers who offers us Balm in Gilead, some shreds of hope, some possibility of white resurgence.”

In addition, Yockey was both loyal and brave — two virtues that Robertson believed were nearly extinct. Perhaps presaging his coming popularity, Robertson claims that Yockey could become “the true philosopher and the true hero of his age.” He ends his review of Yockey with the following endorsement:

So more power to Yockey! He is still alive and kicking in the hearts of a sizable number of true believers. Despite his shortcomings, his life and his works are proof that no matter how far they get us down, we will never be out.

We must never forget that at the nadir of European history. in the aftermath of World War II when Russian troops were barbarizing and looting their conquered territories and American troops were holding lynching bees in theirs, when hardly anyone dared raise his voice against the deliberate starvation, massive brainwashing and the official Allied policy of unlimited retribution and unmitigated vengeance, when it appeared the lights had gone out all over Europe, this time for good — a young American idealist named Francis Parker Yockey broke the general silence and pointed a long, menacing finger at those who were trying to erase the greatest continent on earth from the map and reduce some of the greatest people on earth to the status of zombies. As all the silent ones knew, it was an act of incredible courage to speak up at that time. In the end it cost Yockey his life.

The Dissident Right is more relevant than ever, primarily because we are the only ones telling the truth about what happened and is happening to whites. Francis Parker Yockey and Wilmot Robertson were two of the earliest dissidents to warn about what was in store for us. The reach and influence of both anti-liberal thinkers will only grow in the future as more whites seek answers to our dispossession. So, more power to both Yockey and Robertson!