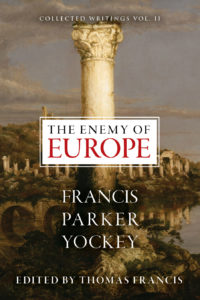 There is news about our forthcoming edition of Francis Parker Yockey’s The Enemy of Europe. We have decided that the volume needs to include Yockey’s German translation of The Enemy of Europe. Originally, we were only going to publish a translation back into English. However, although Yockey’s translation may not be perfect as a piece of German prose, it is still one of his works, thus it should be included. Since adding the German translation will almost double the book’s length, we are postponing publication until May of 2022 in order to get it perfect. The price of the book will, however, remain the same.

Information on preordering The Enemy of Europe as well as our new edition of Imperium appears below.

Note: The limited-edition hardcover has a second appendix of photographs of Francis Parker Yockey, most of them never before published.

You can also preorder Imperium, tentatively to be released December 2022: 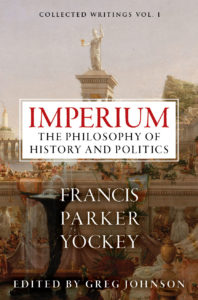 There are three formats for Imperium:

Note: The limited-edition hardcover has an appendix of photographs of Francis Parker Yockey, most of them never before published.

Note: If you wish to collect all three volumes in the limited edition, and ensure that they all bear the same number, you can order the whole set. The third volume, The World in Flames, is now in print and shipping. The cost of the three-volume set, including postage:

To use a credit card or bank transfer email [email protected]

About The Enemy of Europe:

The Enemy of Europe is essentially the third volume of Francis Parker Yockey’s Imperium. First published in 1953, the original printing was seized and destroyed in Occupied Germany, but copies of the German translation survive. This edition is a retroversion into English by Thomas Francis, who did the original translation published by Liberty Bell in 1981. This edition corrects all the mistakes of the earlier edition. Yockey biographer Kerry Bolton’s Introduction places The Enemy of Europe in its historical, philosophical, and geopolitical context.

The Enemy of Europe is the second volume of the new three-volume Centennial Edition of Francis Parker Yockey’s Writings. The General Editor of the edition is Greg Johnson.

THE MORPHOLOGY OF THE SECOND WORLD WAR

The First Interbellum-Period: 1919–1939
The Liquidation of English Sovereignty
Origins of the War
Dominant Power-Currents in the Age of Absolute Politics

THE METAPOLITICS OF THE WAR

THE MORPHOLOGY OF THE THIRD WORLD WAR

Francis Parker Yockey (1917–1960) was born in Chicago. After studying at the University of Michigan, Georgetown University, and the University of Arizona, he graduated cum laude from the University of Notre Dame Law School in 1941. In 1946, Yockey worked as an attorney for the Nuremberg Trials in Germany. In 1948, Yockey published Imperium: The Philosophy of History and Politics (2 vols.) under the pen name Ulick Varange. In 1949, Yockey published a manifesto, The Proclamation of London. In 1953, he published The Enemy of Europe. But Yockey was not just a political theorist. He was a political actor. For the remainder of his life, Yockey traveled the world, using a bewildering array of passports and fake identities, building a network of contacts with National Socialist exiles, Arab nationalists, Marxists, and Third World liberation movements. His ultimate aim was a unified Europe, free to pursue its destiny without the domination of outside powers. He committed suicide on June 16, 1960, in the San Francisco Jail, where he was being held on charges of passport fraud. Since his death, Yockey has been recognized as America’s foremost anti-liberal thinker and exerts a steady and growing influence on the New Right.

Thomas Francis is the translator of the first English edition of The Enemy of Europe (Liberty Bell Publications, 1981).