The World in Flames 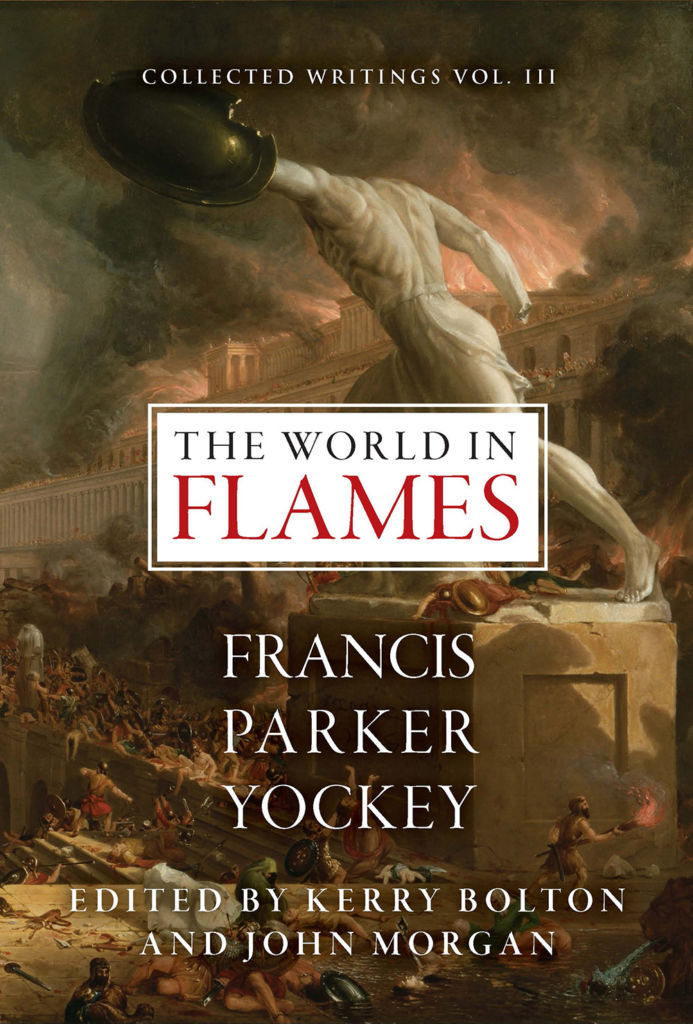 The World in Flames:
The Shorter Writings of Francis Parker Yockey

About The World in Flames:

The World in Flames collects all of Francis Parker Yockey’s surviving essays and correspondence, including recent and never-before-published archival discoveries. The volume is edited with an Introduction and annotations by Kerry Bolton, the foremost expert on Yockey’s life and thought. The World in Flames is an indispensable volume for understanding America’s most important anti-liberal thinker.

The World in Flames is the first published volume of the new three-volume Centennial Edition of Francis Parker Yockey’s Writings. The General Editor of the edition is Greg Johnson.

The limited-edition hardcover has a third appendix of six pages with seven photographs of Francis Parker Yockey, six of which have never been published.

Francis Parker Yockey (1917–1960) was born in Chicago. After studying at the University of Michigan, Georgetown University, and the University of Arizona, he graduated cum laude from the University of Notre Dame Law School in 1941. In 1946, Yockey worked as an attorney for the Nuremberg Trials in Germany. In 1948, Yockey published Imperium: The Philosophy of History and Politics (2 vols.) under the pen name Ulick Varange. In 1949, Yockey published a manifesto, The Proclamation of London. In 1953, he published The Enemy of Europe. But Yockey was not just a political theorist. He was a political actor. For the remainder of his life, Yockey traveled the world, using a bewildering array of passports and fake identities, building a network of contacts with National Socialist exiles, Arab nationalists, Marxists, and Third World liberation movements. His ultimate aim was a unified Europe, free to pursue its destiny without the domination of outside powers. He committed suicide on June 16, 1960 in the San Francisco Jail, where he was being held on charges of passport fraud. Since his death, Yockey has been recognized as America’s foremost anti-liberal thinker and exerts a steady and growing influence on the New Right.

John Morgan was born in New York state, where he was raised, and graduated with a degree in literature from the University of Michigan. He was one of the founders of Integral Tradition Publishing in 2006, and was also a founder of its successor, Arktos Media, in 2010, where he served as Editor-in-Chief until 2016. He has been a writer and editor at Counter-Currents and has contributed to many other publications including New Dawn.