What Is the Ideology of Sameness? Part 3 Ethnocentrism, or the Principle of Diversity 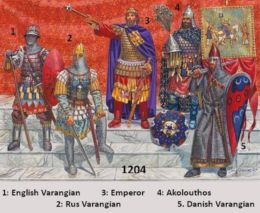 The Varangian Guard of the Eastern Roman Empire.

Just as it would be vain to oppose to abstract equality a similarly abstract inequality, it would in my opinion be mistaken to try to oppose nationalism or ethnocentrism to the ideology of Sameness. Historically, both of these have realized on a small scale what the ideology of Sameness has on a larger scale. Above all, both remain stuck in what Heidegger rightly calls the metaphysics of subjectivity, which makes them the most essential traits of modernity.

Nationalism and ethnocentrism conceive the people or nation as liberalism conceives of the individual: as a fundamentally “free” being deriving its rights as so many attributes of its unlimited “freedom,” and which cannot be obliged except by its own will, within the horizon of egoistical action and the search for one’s best interest. The independence to which they aspire, conceived of as an absolute freedom of maneuver, as a position in which one would not be dependent upon anything, and where one could arbitrarily decide anything one wanted is itself a calque on the liberal ideal of the autonomy of individuals. From this point of view, the universal struggle of nations and peoples is merely a projection onto a broader scale of interindividual competition in which the tribunal of history plays the role of the market.

The dogma of State sovereignty is also bound to the same metaphysics of subjectivity, tending in the final analysis toward solipsism, which places the individual, the ego, at the center of the world and sees in the world merely an object of the will and representation of this ego. The “ego” is merely replaced by an “us.” An ethnocentric people is only interested in itself. It only judges events and situations with reference to the good or bad it can expect from them. This is obviously the negation of any justice and truth, if these words have any meaning. But it is also the contrary of organicism, for the very principle of organicism is democratic solidarity, social reciprocity, in contrast with the principle of association on the exclusive basis of common interest. Just as universalism is never anything but an ethnocentrism expanded to the limits of the universe, nationalism is merely a collective individualism. In both cases what is ignored is the sense of particularity and concrete universality.

Moreover, ethnocentrism is based on a faulty conception of identity. Identity is not an essence but a substance constructed every day. It is not that which never changes, but that which remains as an always there throughout all changes. It is always reflexive, meaning that the constitution of oneself always passes by way of exchange with others. This is why defense of identities can only truly be conducted on the basis of an understanding of otherness.

Like universalism, ethnocentrism is allergic to the Other and always has a tendency to regard it as “superfluous.” The only difference is that ethnocentrism is more brutal. While universalism tends to deny otherness by reducing the Other to the Same, ethnocentrism tends to reduce diversity by suppressing the Other or radically casting it aside. In either procedure, otherness is considered without interest, and diversity as without value. Conversely, the positive conception of otherness consists in recognizing difference without deriving from it any argument for submitting the existence of one to the desires, interests, or reason of others. Oppression not only denies the freedom of the oppressed but also that of the oppressor. This is what Marx meant when he wrote that “a people which oppresses another cannot be free.” We are familiar with the Master-Slave dialectic: The two roles ineluctably get switched. Whoever has colonized should not be surprised to find himself colonized in turn. Whoever destroys the identity of another does not strengthen his own but makes it more vulnerable, more threatened still, in a world which has lost a little more of its diversity.

It is indeed the principle of diversity which ought to be opposed to the ideology of Sameness. A principle draws its strength from its very generality. The diversity of the world constituted its only true wealth, for this diversity is foundational for the most precious good of all: identity. Peoples are no more interchangeable than persons. To say that none has any more intrinsic value than any other does not mean that they are the same — the Same in different forms — but that they are all different. So tolerance does not consist in regarding the Other in order to see Sameness in it, but in understanding what constitutes it as other, i.e., grasping what otherness is, a reality irreducible to any “understanding” by way of mere projection of oneself. Differentialism does not forbid value judgments any more than it fails to condemn a relativism ignorant of the truth. But it does not allow itself mentally to stake out a position overlooking the abstract, to posit itself as the highest authority (whether because it is “universal” or because it is “superior”) by virtue of which it would be possible, or even necessary, to impose on others a way of being not their own. When Aristotle defines the best form of government as that in which all citizens participate both in exercising and submitting to rule,[1] he certainly enunciates a general principle which goes well beyond the boundaries of the Greek city, but he does not rule out that other people may give themselves other laws.

It is not a matter of lapsing into angelism. Identities can clash, and differences can assert themselves at one another’s expense. On such occasions it is perfectly normal to defend one’s own belonging as the highest priority. But to defend one’s identity from an abusive form of self-assertion (colonization, mass immigration, etc.) carried out by someone else is very different from thinking one’s own identity is the only one of value. The principle of diversity is not threatened by the former attitude, while it is by the latter.

It is also not a matter of passing into the contrary excess by privileging that which is different to the point of forgetting that which is common. Difference is merely more important. It is more important first of all because it is what specifies, what defines identity, and what makes each person and each people something irreplaceable. It is also more important because membership in humanity is never immediate, but on the contrary always mediate: one is only human by belonging to one of the cultures or collectives constitutive of humanity. (“I have seen all sorts of men over the course of my life,” Joseph de Maistre already said, “but man as such I have never encountered.”) Finally, it is more important, because it is starting from singularity that one may attain to the universal, and not the other way around, viz., not by deducing an abstract idea of singularity from a universal posited a priori. Every concrete existence thus turns out to be indissociable from a particular context, from one or more specific forms of belonging. All belonging is, certainly, a limitation, but it is one which saves us from other limitations. The dream of the unconditioned is merely a dream.

“Men are afraid of Sameness, and that is the source of racism,” observed Jean-Pierre Dupuy. He adds:

What men are afraid of is indifferentiation, and this is because indifferentiation is always the sign and product of social disintegration. . . . Equality, negator in principle of differences, is a cause of mutual fear.[2]

Men do indeed fear Sameness at least as much if not more than Otherness. The dominant ideologies believe ironically that the homogenization of the world can only have a pacifying function, since it allows for better “understanding.” We see everywhere, to the contrary, that it gives rise to identitarian tensions, awakens age-old forms of irredentism, and engenders turbulent forms of nationalism. Even within societies, the ideology of Sameness generalizes the mimetic rivalry so well described by René Girard which exacerbates the desire to distinguish oneself with all the more force in that it forbids distinction. Sameness thus proves to be a profound source of conflict. At best, it generalizes indifference and boredom. At worst, it involves violent reactions and unleashes passions.

The incommensurability of persons or cultures is not synonymous with incommunicability. It simply involves recognition of that which irreducibly distinguishes them. The ideology of Sameness aspires to total transparency, but the social realm always involves some opaqueness. Opaqueness resides in the incommensurable. Some people think that affirming differences can only make men radically alien to one another (these are generally the same people who automatically interpret identity as a form of confinement), but the converse is true. Exchange presupposes the Other. It has no meaning except insofar as it places one in the presence of an Other. An exchange of Sameness with Sameness can only be a monologue. Dialogue, dialogism (Martin Buber), involves otherness, otherwise the dialogue is reducible to a monologue. Not only does the maintenance of differences not prevent dialogue or exchange, but it is the first condition for these things. In this regard, one would be mistaken to oppose difference, supposedly aggressive and elitist, to diversity. Diversity consists of harmonized differences.

A society in which there were only men “like everyone else” would be a society where individuals have become interchangeable, to the point where the disappearance or elimination of this or that one of them would be of an altogether relative importance from the point of view of global society. It is quite otherwise in a differentiated society. Difference, moreover, is a factor of resistance, and thus of freedom. If individuals and peoples were fundamentally the same, or if they were entirely malleable, they would be all the more threatened by propaganda and conditioning. That their diversity constantly reappears, that the human species is so strongly polymorphic, shows that they are anthropologically resistant to homogenizing models.

Difference, finally, is a factor of integration and harmony. Societies which recognize the reality and value of differences are also the most capable of integrating those who are vehicles of these differences (formerly, even the village idiot had a place in the village). Societies which do not recognize differences, or consider them insignificant, are on the contrary destined either to exclude all who do not correspond to the unique model they are trying to impose or to make the social bond disappear by emptying it of its organic, composite, and differentiated character.

« Why Capital Is Woke

» What Is the Ideology of Sameness? Part 2