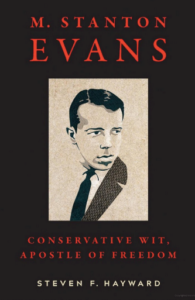 Is it possible to be a real old-school conservative or Man of the Right, and not — sooner or later — cut corners, betray your principles, sell out? Or — as we liked to put it seven or eight years ago — cuck?

This question was in the forefront of my mind as I dipped into this richly entertaining new biography of M. Stanton Evans by Steven Hayward. Surely, I thought, Stan Evans is going to disappoint us sooner or later. He’ll pull a Bill Buckley move, come out with trite drivel about how there’s Only One Race (the yoomin race); or how Israel is our most trusted ally; or how Harry Truman was so wise to “integrate” the armed forces in 1948. He’ll do a George Will and tell us why some new “liberal” agendum is actually very sound and in keeping with conservative or libertarian principles. Et cetera.

But not a bit of it! Incredibly, this Stan Evans fellow appears to have got through his 80 years of terrestrial life with his integrity intact. From what I can gather, he managed it with tons of wit, a cynical attitude, a healthy pugnacity, a bit of deflection, and maybe also the good sense to keep away from the fever swamps of the Left where the debate was rigged. If you tried to nag and provoke him with some Left-liberal piety — Don’t you agree, Stan, don’t you agree? — he’d zap you with some hilariously contrarian declaration.

Perhaps the most famous “Bore Baffler” (as he called it) was his rejoinder to a cocktail-party bore trying to persuade Stan to denounce the late Senator from Wisconsin, Joseph R. McCarthy: “Personally Phil, I didn’t like what McCarthy was trying to do, but I did like his methods!”

Much of the Evans wit follows the same shock-and-awe template:

“I wasn’t for Nixon until after Watergate,” he told an earnest academic audience at Princeton in 2006. “After wage and price controls, Watergate was a breath of fresh air. In fact, I called over to Pat Buchanan at the White House and told him, “If only I had known you guys were doing all this neat stuff . . .”

When accosted by a bum asking for money, Stan agreed to give him some, along with the admonition, “Only if you’re going to buy alcohol; I wouldn’t want you to use it to buy food.”

Author Hayward very wisely front-end-loads his biography with some of the most pungent witticisms and stories, such as about how Stan liked junk food: He supposedly once sent back a White Castle hamburger because “it wasn’t greasy enough.” In his latter years, when he lived near Leesburg, Virginia, he rejoiced that his new village gave him great variety in restaurants, as there was a Roy Rogers at both ends of town. He liked having a three-legged dog named Zip, because Zip wasn’t always begging you to go for walks or play fetch. He considered cigarette smoking his way of getting the recommended five daily servings of leafy green vegetables.

And so Hayward hooks you from the start, showcasing a colorful, lovable personality you want to know more about. That’s a good thing, because the Evans career was a dizzying one. At one moment he’s appointed regional editor for the nascent National Review, in the next he’s writing editorials for the Indianapolis News, then suddenly he’s editor of the paper, at age 26. Meantime he’s founded Young Americans for Freedom (YAF) and will go on to start the American Conservative Union (ACU), CPAC, and the National Journalism Center in Washington, DC, which has produced a varied array of writers and pundits, including Ann Coulter, Malcolm Gladwell, and Greg Gutfeld. He didn’t found the rather unfortunate American Spectator publication, but in its early, two-fisted incarnation it came into being while sheltered under his Indiana lee, as it were.  Author Hayward also credits Evans with founding the Party of the Right (POR) in the Yale Political Union during his undergraduate days. The POR was more or less the motherhouse and spawning ground of YAF and the ACU, so that would make sense. However, my POR historian friends tell me that the author is in error; Stan Evans was a member, but not the founder.

Moving right along here: Stan was also managing editor of Human Events (for which he was radio pitchman), taught journalism at a university for 25 years, and edited a magazine called Consumers’ Research (new to me, but it turns out to be the original, investigative version of Consumer Reports; the latter originated as a Communist-backed spinoff in the 1930s). He’s probably also the individual most responsible for getting Ronald Reagan elected to the White House, beginning with Reagan’s insurgent bid to wrest the nomination from Gerald Ford (whom Stan despised) in 1976. He met President Reagan regularly during his first term in office, and Human Events never held back criticism when the President strayed from the conservative strait-and-narrow. “I’m reading it more and enjoying it less!” said Reagan, balefully.

Reading the Reagan section, I was put in mind of F. Roger Devlin’s shrewd and bitter appraisal of the Reagan years as an eight-year self-congratulatory inaugural ball. (This was during Roger’s talk at the November 2016 NPI conference.) A fair judgment, but Stan Evans wasn’t to blame.

You may recall Stan’s sonorous, drawling voice from CBS Radio’s Spectrum (“Nine Distinct Viewpoints!”) a few decades back. The Stan Evans sound was a mix of Jimmy Stewart and Jim Backus, with maybe a little Edward G. Robinson thrown in. He didn’t tell jokes; the segments were too short for that. His commentary was always somber and thick with facts. When I was in college, listening to his radio spots and his plugs for Human Events, I never guessed what a hilarious and subversive wit lay behind the drawl.

I did know a little bit about his background, however, and had good reason to suppose that he was of very sound stock. His father, Medford B. Evans, was a college professor and one-time head of security for the Manhattan Project. Evans pere was also a regular contributor to American Opinion magazine (the John Birch Society periodical) and — best of all — the managing editor of The Citizen: A Journal of Fact and Opinion, which was the organ of the Citizens’ Councils of America (CCA). The Citizens’ Councils are almost invariably referred to in Leftist media as “White Citizens’ Councils,” and if you do a quick search online (go ahead and Google), you’ll find the usual slurs (“white supremacist,” “racist,” etc.) that attach to racialist and pro-segregation activism. I see Wikipedia actually calls them White Citizens’ Councils throughout the article, and says they were basically a Rotarian version of the Ku Klux Klan.

But in its heyday, the CCA was a very constructive and useful organization. The Citizens’ Councils came into being in order to halt or avoid school integration in the wake of the 1954 Brown v. Board of Education decision. One obvious solution was to found your own private day schools (“segregation academies,” the Left called them). Medford B. Evans wrote a guide on how to do it entitled, “How to Start a Private School.” Curiously enough, author Hayward mentions the Bircher connection of the elder Evans, but says nothing about his prominence in the CCA. This is probably simply an oversight; what happens when you write a biography without consulting me. The only reason I know Medford Evans edited The Citizen is that I read American Opinion in my tender years, and there it was, every month, in Prof. Evans’s bio.

I lay these tidbits about Stan Evans’ background before you not just because they’re interesting trivia, but because I believe these facts made his life easier. There was no way he could cuck and canoodle his way into the Left’s good graces, the way Bill Buckley and Barry Goldwater and, alas!, Ronald Reagan liked to do. Stan’s father was one of the leading segregation activists of the 1950s and ‘60s, and there was no getting away from that. Perhaps if Buckley’s father had been something like that, National Review could have held onto the pro-segregation stance it took in its early years.

Significantly, Stan seldom touched on issues of race; he didn’t need to. Nor did he waste ink chasing after pointless “social conservative” causes such as abortion and the homosexual menace (you know — the two issues we’re permitted to waste energy on). After all . . . there was so much other neat stuff to write about.

Pricking inflated reputations, for example. I was delighted to find him expose the poltroonish humbug of George F. Kennan, the “Mister X” who wrote one long telegram in 1946 proposing a “containment” strategy against the USSR, and spent the next half-century coasting on his reputation. In the 1950s and ‘60s the usual Kennan advice was that we shouldn’t try to roll back the Soviet juggernaut; rather we should devote ourselves to maintaining Peaceful Coexistence.

Stan Evans liked to rehabilitate reputations, too, when such was in order. Perhaps his most famous book is the monumental Blacklisted by History, a thousand-page doorstop demonstrating that Joe McCarthy was usually in the right while his defamers were well-poisoners, passing off endless lies that eventually embedded themselves as commonly accepted “facts.” A crucial one here is the very first lie they told about McCarthy: that in Wheeling, West Virginia in 1950 he said “I have here in my hand” a list of 205 Communists or security risks in the State Department. Stan Evans chased this story down the rabbit hole and found that the actual number McCarthy used was 57. Where did the 205 come from? Who knows, but it doesn’t appear in any news report from the time. Likewise, the story that McCarthy was a bottle-a-day man who drank himself to death is highly dubious, and most likely one more instance of character assassination.

Digging for facts and numbers and other paydirt were Stan’s specialty. He didn’t just dump opinion on your lap, the way most columnists and editorial writers do. Decades before anyone talked about “death panels” and healthcare rationing as a result of Obamacare, Stan was gauging the effect of Federal involvement in healthcare delivery and finding that the net result was a doubling in healthcare costs, as a result of removing competition from the marketplace. If you find your health insurance now costs five times what you paid 30 years ago, this is something that was long ago forecast and diagnosed by M. Stanton Evans.

As we can see from the cover, Stan was quite a handsome young man. Again, a bit Jimmy Stewart-ish. But you’d never recognize him from that drawing or early photographs if you knew him any time after about 1970. Early on he developed a jowly visage, ending up looking like the cartoon character Deputy Dawg. This fit in very well with his wry, contrarian persona. Stan was the mischievous uncle who feeds you a glass of rye when you’re ten years old. “Good medicine! It’ll kill the worms! Drink up!” How can you not love this guy?

» Septentrion A Novel by Jean Raspail, an Old Bloyian at Heart